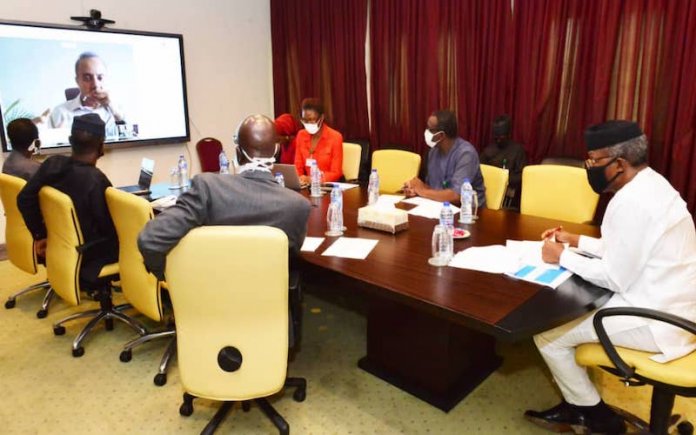 Vice President Yemi Osinbajo is enlarging the pool of options open to Nigeria in achieving the Buhari Presidency’s plan to turn the current economic challenges to an opportunity for Nigerians, especially the “Common Man.”

The vice president met with representatives of the International Monetary Fund and the World Bank Tuesday as Nigeria continues to improve on its economic stimulus packages for its citizens.

President Muhammadu Buhari has asked the Vice President to chair the Economic Sustainability Committee (ESC) and the Committee has been collaborating with domestic sectors of the Nigerian economy and now the vice president is interfacing with international agencies for the purpose of rolling out options as the President has directed.

A source in the Presidency added that the Osinbajo panel will soon be submitting a Sustainability Plan which the President had requested and was expected to take the country’s economy to new heights between now and 2023.

In a tweet by Laolu Akande, the spokesperson to the Vice President, the meeting with the agencies just concluded this Tuesday afternoon. Although Akande did not indicate but Villa sources added that the President intends to act speedily on the report of the Osinbajo committee.

“VP Osinbajo has been busy today holding videoconference-based meetings with IMF and World Bank representatives on how the agencies can collaborate with President Buhari’s forthcoming additional economic stimulus packages.

“Video shows just concluded meeting with World Bank Nigeria representatives,” he tweeted along with a video of the meeting.

The Economic Sustainability Committee is a seven-member team chaired by Prof Osinbajo, and the Committee is expected to conclude its report very soon. It was set up as a response to the recent challenges in the economic front resulting from the fall in the prices of oil in the international market as well as the disruptive impact of the pandemic that has disrupted the global economy.

The committee is made up of Ministers of Finance, Budget and Planning; Industry, Trade and Investment; Labour and Employment; Minister of State Petroleum Resources; CBN Governor; NNPC Group Managing Director and Permanent Secretary, Cabinet Secretariat who serves as secretary of the committee.

As a result of the way workers were losing jobs in their millions President Muhammadu Buhari inaugurated the Economic Sustainability Committee to seek ways in which Nigerians can keep their jobs.

The major focus has been on seeking ways to protect jobs and also create new ones after the coronavirus pandemic.

As recommended by the Economic Sustainability Committee, President Muhammadu Buhari has approved the expansion of the COVID-19 palliatives to accommodate more Nigerians, especially those who rely largely on daily income.