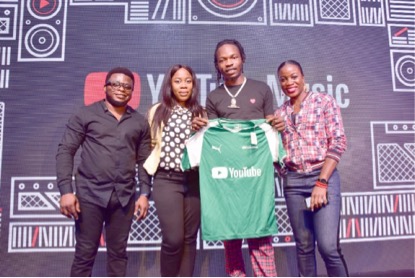 Recently launched in Nigeria, YouTube Music is bound to be a mainstay on millions of music lovers’ devices due to many reasons, including features made possible by its association with tech giant Google, writes Demola Ojo

“They say music can alter moods and talk to you…,” is a line from one of my favourite songs of the early 2000’s.
There probably wouldn’t have been a better time for YouTube Music to launch in Nigeria than early March 2020, are my thoughts as I listen to “Friday Evening” by Chaka Demus and Pliers, this Friday evening in early April 2020.

Like many parts of the world, Lagos has witnessed a restriction of movement for the past few weeks due to the COVID-19 pandemic.

For many music lovers, staying home isn’t so bad if you have a steady flow of music from a streaming service that has an inexhaustible catalogue of songs, videos, albums and playlists, and can also predict what you would like to hear based on your listening history. The YouTube Music app is this and much more.

Midway into the Tease Me album by Chaka Demus and Pliers, I marvel at how fast time whizzes by listening to music, and how it helps with vividly recollecting memories of decades past.

It’s been barely a month when YouTube Music launched in Nigeria, the second African country after a previous launch in South Africa last year. Elaborating on the benefits of YouTube Music compared to other music streaming services at the event held before social distancing became a thing, Addy Awofisayo, YouTube’s Content Partnership Manager for Nigeria said; “I prefer not to make comparisons. What I prefer to do is tell you all the amazing features on YouTube Music and allow you as a user to make that decision.

“One of the amazing features is personalising the music to your taste. Once you get to the YouTube music app, we ask you for your favourite artistes, to get an idea of the kind of songs you like. Based on that information, your music tastes and music listening habits, we curate music just for you.”

In the month since she made those comments, I’ve downloaded the app and travelled back in time, evoking memories through albums like Missy Elliot’s Supa Dupa Fly, Tupac’s All Eyez on Me and subsequent posthumous ones, especially Loyal to the Game, the Notorious B.I.G’s Life after Death and Dr Dre’s 2001.

I’ve made a deliberate attempt to start by listening to songs from the 90’s and early 2000’s and gradually ease to the present. But I couldn’t help but listen to the Gongo Aso album by 9ice, “My House” by Diana Ross, Jimmy Cliff’s “Hotshot”, Burna Boy’s “Odogwu” and “Rema’s “Beamer”. The latter two are currently on the top 100 Nigerian chart.

There’s also a top 100 global list as well as a separate chart for videos too. For songs with a video, there’s an option to switch seamlessly between both formats mid-song.
Suggestions on the home page include new releases. Today I opt for Drake’s “Toosie Slide” and Future’s “Temptation” as I make a mental note to immerse in Tory Lanez’ spanking new album, The New Toronto 3, once I’m done with this article.

Easy Access, Easy to Use
Designed with an excellent, easy to use home screen, YouTube Music has thousands of playlists, the official versions of millions of songs, albums, remixes, covers and live versions from the biggest artists in the world to the freshest voices breaking out, in addition to all the music videos people expect from YouTube.

While fans can access ad-supported YouTube Music for free, YouTube Music Premium is a paid membership that offers background listening, downloads and an ad-free experience for N900 a month.

The March launch also included YouTube Premium, which provides members the benefits of Music Premium, plus ad-free, background listening, and downloads across all of YouTube, including YouTube Originals shows and movies at a cost of N1,100 per month or N1,700 per month for a Family Plan.

AI and Search
A Google-owned company, YouTube is the number two search engine in the world after – you guessed right – Google. YouTube has harnessed the power of Google’s vast AI and search capabilities to make Music a mind-blowing experience.

For example, playlists sometimes include Evening Music or Thank God It’s Friday, depending on the time of the day or day of the week. It recommends music based on location; relaxing for home and the airport, or something fast-paced for the gym.

You can also find songs by searching keywords and lyrics. I typed “They say music can alter moods and talk to you…” into the search bar. Top of three suggestions was the one I was looking for; Eminem’s “Sing for the Moment”, a thought-provoking rock-infused rap rendition from his 2002 album, The Eminem Show.