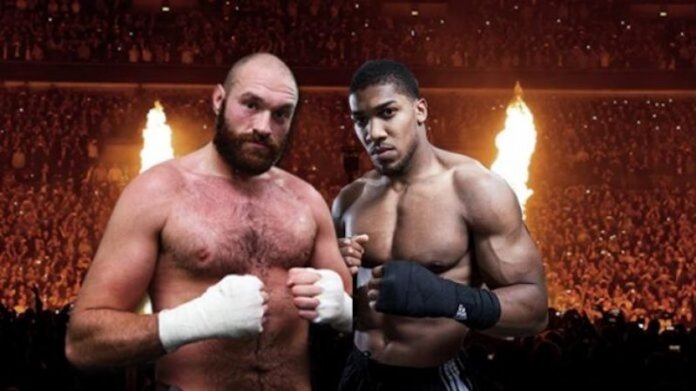 Anthony Joshua has thrown down the gauntlet for a heavyweight title showdown with Tyson Fury as the WBO, WBA and IBF champion made his case for an all-British unification bout.

All heavyweight belts reside in the UK, with Joshua recapturing his three belts after avenging his shock defeat by Andy Ruiz Jr in December, while Fury blitzed Deontay Wilder in February to win the WBC belt.

It means that, should Joshua and Fury face off in the ring, the victor will be the first unified champion of the division since Lennox Lewis.

And Joshua has made his case for the all-British showdown.

‘If you really want to say you’re No 1, come fight me. Let’s get it on,’ he told Sky Sports. ‘I’ve got the rest of the belts so it only makes sense.

‘I’m the unified heavyweight champion of the world, he’s the WBC champion. What it will prove, me and him fighting? There will be one dominant figure in the heavyweight division that will have all of the belts and become undisputed.

“Logically to prove yourself as No 1, I have to fight Tyson Fury. He has to fight Anthony Joshua.”

While both fighters have expressed their desire to fight as soon as possible, some obstacles stand in the way of the fight happening. Wilder has triggered a rematch clause to face Fury for a third time while Joshua is to defend his belts against Kubrat Pulev.

Speculation has been rife that Bob Arum, the promotor of Fury and Pulev, could arrange for the pair to skip their bouts so Joshua and Fury can fight.

Joshua fired shots at Wilder, who has for some time obstructed the path to a unification bout with a series of farcical negotiations between his and Joshua’s teams.

“It would be amazing to tell Pulev ‘I think it’s best if you step aside for now’ and to tell Wilder “we have bigger fish to fry”,’ he added.

‘”Enjoy your Alabama chicken while we get cracking in the UK!” That fight needs to happen because there will never be another time like this again.’