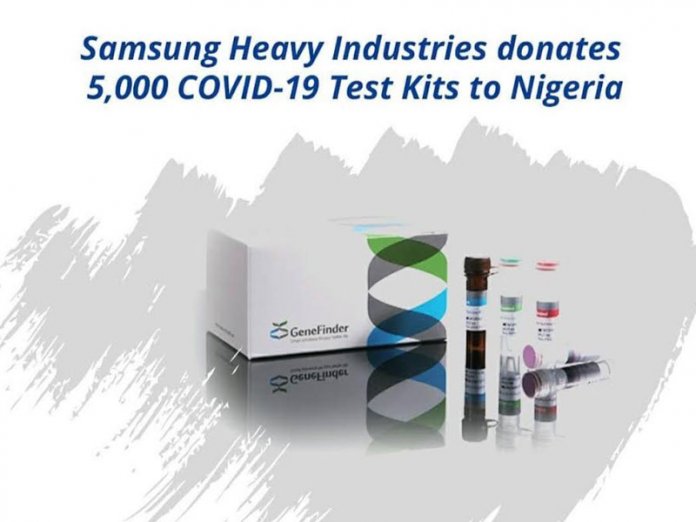 By John James
In line with its corporate strategy of giving back to Nigerians, Samsung Heavy Industries Nigeria (SHIN) Limited has secured 5,000 COVID-19 test kids from the South Korea Government to help the Nigerian government tackle and mitigate the impact of the COVID-19 pandemic ravaging the world.

The Republic of Korea has become a global model for tackling the dreaded virus and has received requests for the test kits from many countries of the world.

Indeed, the World Health Organisation (WHO) had specially identified South Korea for special commendation for the country’s innovative approach in tackling the virus.

In one of the global health body’s update on the dreaded virus, Ghebreyesus had noted that in January/February 2020, South Korea was faced with surging community transmission but the country refused to “surrender.”

Ghebreyesus reportedly argued that with the country’s innovative response, infections had been declining in the country due to its efforts to educate, empower and engage communities.

He pointed out how South Korea developed innovative testing strategies, rationed the use of masks, conducted exhaustive contact tracing and testing, and isolated suspected cases.

The WHO chief also disclosed that the world health body was collaborating with other virus-hit countries to apply the lessons learned in South Korea and adapt them to fight against the pandemic.

As part of this collaboration, two consultants from WHO – Dr. Thomas Fletcher and Dr. William Fischer, were reportedly said to have indicated interest to learn South Korea’s experience in containing the virus, including self-quarantine and emergency networking measures

It is therefore heart-warming that the intervention of SHIN in the area of donation of test kits will help Nigeria to benefit from the Korean experience in tackling the virus.

Despite the high demand for the kits from different countries of the world, and the difficulty in securing and rationing them, SHIN was able to secure 5,000 kits for the Nigerian government.

Speaking on the donation, SHIN said it felt it was part of its responsibility to help the Nigerian government to tackle and mitigate the impact of the global pandemic.

The company said it is making the donation because of its care and love for Nigerians.
The donation of the COVID-19 test kits did not come as a surprise as SHIN has consistently given back to Nigerians over the years as part of its Corporate Social Responsibility (CSR).

For instance, the company has been sponsoring the eye surgeries of Nigerians on a yearly basis.
Since 2015, SHIN has worked with Vision Care, an organisation under WHO, in the yearly Eye Camp to give free cataract surgeries to Nigerians who cannot afford the treatment.

In 2019, it sponsored the eye surgeries of at least 115 Nigerian patients and 224 outward patients as part of its CSR in Nigeria.
In the previous Eye surgeries in 2018, 102 patients, who were at the risk of blindness, recovered their eyesight.

Since it started the programme, SHIN has sponsored the eye surgeries of 572 Nigerian patients, 1,593 outward patients and has also donated glasses to 99 patients.

The company had also donated electrical equipment, clothing and other relief materials to the victims of herdsmen and Boko Haram insurgents’ attacks in Jos, Plateau State.

A missionary group from Korea had constructed a school in Jos for the villagers in Rhizha, where four missionaries were teaching about 560 children and also providing counselling to victims, mostly women, suffering from the trauma from Boko Haram insurgents’ attacks.
However, these acts of violence did not deter the missionary from creating this initiative to assist the community.