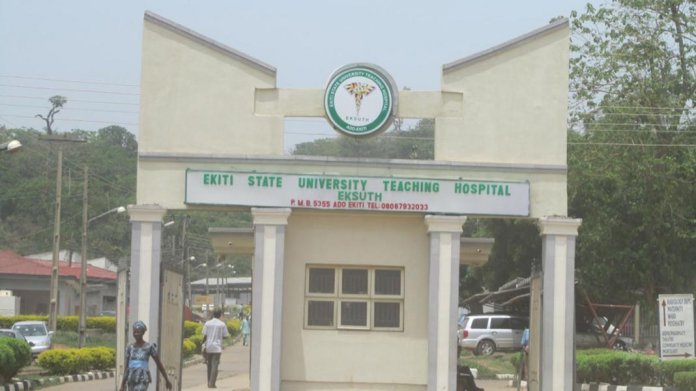 A contractor with the Ekiti State Government, Chief Adebayo Popoola, has lamented the rampancy of detention of patients at the Ekiti State University Teaching Hospital (EKSUTH), Ado Ekiti due to their inability to pay medical bills.

Popoola therefore called on private organisations and spirited individuals to partner government to give affordable medicare to poor Nigerians and bail the victims from embarrassment.

The contractor spoke at EKSUTH on Tuesday while defraying the medical bills of some indigent women who had just delivered babies and other patients who were unable to leave EKSUTH over failure to pay their bills.

He had paid their bills which was over N1 million after he was consulted upon visiting the hospital to handle the fumigation of the hospital complex as part of efforts to tackle coronavirus pandemic in the state.

A mild drama ensued when the highly dejected detained mothers of new babies who had been held back at the maternity ward for their indebtedness asked Popoola for assistance.

His outfit, Emma POP, is collaborating with the government of Ekiti State to fumigate the state to contain the coronavirus.

Apparently moved by compassion for the women and their newborns, Popoola paid over N1 million to facilitate their discharge and also offset the bills of other patients, a gesture which brought joy to the beneficiaries.

Speaking after paying the bills, he said the gesture was his modest contribution to assist the needy and bring smiles to their faces.

According to him, “Nothing is too small or big to do for fellow human beings during this period in the country.”

He also hailed the Ekiti State government’s efforts in ensuring that the state was free of the coronavirus disease which led to the fumigation exercise.

One of the newly delivered women and a beneficiary still has her twins inside the incubator, while bills had piled up and she and her husband, being civil servants, could not afford to pay the huge bills.

A beneficiary of the gesture, Miss Fadahunsi Jumoke, had been discharged more than a week earlier for a debt of N37,000.

Two women who delivered by Caesarian Section (CS), Mrs. Omowumi Ajayi and Mrs. Oyeleye, could not hide their joy after their bills of N150,000 each were paid by Popoola.