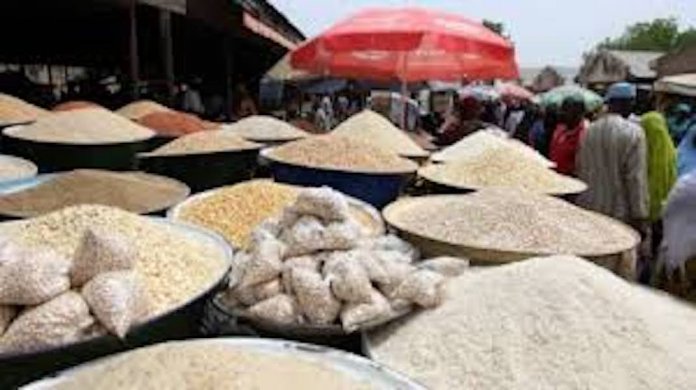 Prices of foodstuffs and other essential goods have gone up with residents of locked down states, particularly the Federal Capital Territory (FCT) and Lagos State reeling under the effects of the one-week old total restriction to curb the spread of COVID-19.

A survey carried out by THISDAY in different parts of Lagos State showed that the prices of staple items such as rice, yams and garri rose by between 80 and120 per cent.

For instance, at the market in front of the Lagos State Housing Estate at Abesan, Ipaja, the price for an average tuber of yam, selling for between N400 and N500 before the lockdown, has jumped to between N1,000 and N1,200.

Also a paint bucket of garri, previously sold for N500, is now selling for N1,200.
Other foodstuffs like beans, plantain flour, corn flour have equally experienced increases in their prices.

“Oga, it is not our fault for the increase in these foodstuffs. This yam (lifting up one of the big tubers on her table) comes from the market at N950. When I add transportation cost and my little profit, you don’t expect me to sell it at N1,000,” one of the traders, who identified herself as Mrs. Mary Adebayo, told THISDAY.

She said because of the movement restriction, she might not be able to restock her store.

“I have almost sold my entire stock because people are rushing to buy food to keep at home; I may not be able to go to the market to refill my store as there are no vehicles on the road,” she added.

Also, one kilogramme of frozen turkey selling for N1,400 now sells for N1,800.
A popular bakery, Mount Olives Confectionaries, has also increased the price of its bread.

Retailers now sell the Oliver Bread for N350 instead of N300 for the average size.

At the Iyanera area of Ojo Local Government Area of the state, a buyer who simply identified herself as Ayomide said: “How can I buy a paint bucket of of garri for N1,200? Most of the sellers had the foodstuff in their store; so, I wonder what influenced their decision to increase the price. We are our own problem in Nigeria.

Reacting to the lockdown, a commercial motorcyclist, who simply gave his name as Innocent, said he came out to look for money to feed his pregnant wife.
He said: “I took her to the hospital yesterday at Alaba International to pay for hospital for delivery.

“We were charged N10,400 instead of the earlier charges of N7,000.
“She will be due any time soon. I don’t know if delivery fee will be hiked. And I couldn’t stock my home. My pregnant wife eats three times her usual size of meal. I’m not happy at all about this isolation. We were not given enough time to stock up.”

Another Lagos resident, Azeezat Zakariyah, said: “Honestly, it’s not easy at all.

Definitely, it’s for the good of the people so as to limit or eradicate the spread of the virus but our government has failed totally in putting things in order – things that could’ve helped citizens comply better to the stay-at-home rules.

“To start with, the power supply has been terrible. I can’t boast of having four straight hours of power supply and yet we are expected to store food at home but no light to preserve food items kept in the freezer.

“What happens to those who survive on daily income? Government should’ve thought of a better plan before the total shutdown.

“Well, personally I don’t have a choice other than to comply by staying at home for the number of days given while I keep hoping for a positive situation.”

Another resident, who identified herself as Ajayi Sarah Ayomide, said: “I don’t see the lockdown as a good idea. For example, if someone in the family has it, the rest will contact it because it’s not immediately you start seeing the effect of the virus definitely, there will be increase.”

On her staying power she said: “ If this doesn’t exceed 14 days I am prepared for it and if does, there may be problem.”

Most of the people THISDAY spoke to said they had not benefited from the palliatives by both the Lagos State and the federal governments.

The immediate past Chairman of the New London Estate Resident CDA, Mr. Emmanuel Nzekwue, told THISDAY that the estate with almost 1,000 houses received only one 10kg bag of rice from the COVID-19 relief committee so far.

“The new Chairman of our CDA, (Mr. Gbenga Lawal) called me to come and collect a share of the rice that COVID-19 committee sent to our CDA. On getting there, I saw only one 10kg bag and I asked if that was my share but I was told by my chairman that it was the only bag that was sent to us,” he said.

The lockdown is also biting hard on FCT residents.

Many of them complained about the effects of the restriction on their economic and social lifestyle.

John Agwu, who is a trader at Building Material Market, at Nyanyan, said he had been unable to fend for his family because his shop had been locked up since the directive.
“This lockdown is a sad statement for business, which has been badly impacted. We cannot make any sales because the shops have been locked since the lockdown. I have been finding it difficult to feed my family in the past three days because of the development. My situation is also not helped because I took a bank loan to buy some of my goods. “How do I pay back when no one is certain when the restriction will be eased,” Agwu said.

A motor mechanic in Jabi Market, Matthew Akinsanya, described the restriction as an over-reaction.

Akinsanya said government failed to consider the effect a 14-day restriction on movements would have on artisans like him.
He said he could barely eat since he had not been working in view of the stay- at- home order.

Another FCT resident, Lateef Atanda, said the lockdown had paralysed all business and social services in the city.

Atanda, who is into media production, said he had been unable to fix the screen of his computer that cracked recently.

He said he could not get a computer technician to repair it in view of the lockdown.
Stephen Terhemba echoed concerns about the shock the lockdown would have on the economy as all public workers had been asked to stay at home since March 24 until further notice.

Gbenga Akinola, who lives at Wuse Zone 4, said the current situation had led to the artificial scarcity of commodities and hike in prices of those available.
He said with the closure of the Wuse Market, a crate of eggs that was selling for N800 before the lockdown, was being sold for N1,500.

But there are some residents who supported the lockdown.

One of such is Ali Hadejia, who resides at Mpape.

Hadejia said the federal government should be applauded for the measures taken to curb the spread of COVID-19.

He said the nation’s economy and primary health facilities would not be able to cope if the spread of the virus escalates.

I Have Pact with People of Owo/Ose Federal Constituency, Says Canada-based Doctor