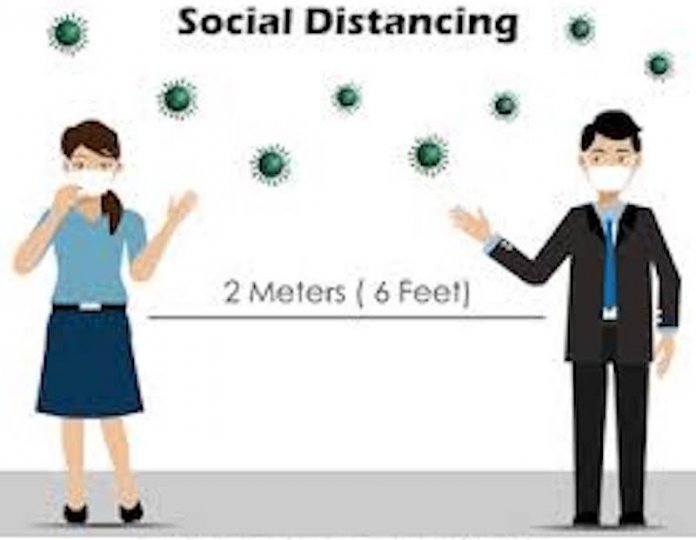 With the outbreak of the dreaded COVID-19 pandemic, new vocabularies and terminologies have been introduced into our literary space. One of these new vocabularies is social distancing. It refers to measures that reduce contacts between large groups of people and underscores the importance of maintaining a safe physical distance between people to prevent infections from easily passing from one to the other.

A cursory look around Nigeria – especially Lagos – the environment typifies very dense urban settlements with human traffic swarming like bees at urban city centres without a conscious attempt to put order and decency. Also, with the burgeoning state of the real estate industry and the apparent lack of enforcement of the extant physical planning laws of development in the state, properties are being developed without due regard to air space, allowable number of units per plot, (density), statutory green areas, the minimum number of parking spaces, as well as other planning regulations. This has turned the city into a big urban conundrum.

The consequences of these developments are evidenced in the poor sanitary conditions all over the state, traffic congestion, environmental pollution, declining productivity, and very poor quality of life.

Perhaps a new vocabulary of environmental distancing should be coined as a metaphor to curb the various infractions being experienced in our physical environment in Nigeria. With the way redevelopments are springing up in most of our residential estates, any outbreak of fire will wreak a lot of havoc on surrounding buildings due to the apparent disregard for the statutory airspace between buildings.

The other areas where environmental distancing should be applied is the Right-of-Ways (RoW). These are areas earmarked by planning authorities for establishment of roads, bridges, power lines, drainages, railway lines, gas/oil pipelines, flood plains and green belts. These areas should be properly gazetted by government and signposted for the blind to see and any encroachment by anybody should be met with very stiff penalties.

Serious losses have been incurred (both human and material), due to the incessant encroachment on the right- of-way and continuous distortions of approved master plan by highly placed government officials and politicians for selfish and pecuniary gains to the detriment of the public good.

The government owes it a duty to protect its citizens by protecting, monitoring and enforcing the executions of master plan and the RoW enshrined in it to prevent looming disasters as witnessed in the flooding of the entire Isheri axis of the Lagos- Ibadan Expressway and the recent explosions that caused many the loss of lives and property at Abule Ado area of the Amuwo Odofin Local Government Area of Lagos State.

These are avoidable disasters. Also of immediate concerns are the very numerous developments under the high tension power lines in the state. A minimum setback of about 50 metres is stipulated by the law for any development around these lines, but most of these areas have developments right underneath them or sited with inadequate setbacks from them. Decisive actions should be taken by the government now before another disaster occurs. These corridors could in fact be turned into beautiful green areas which will help in mitigating climate change.

It may not be a bad idea for various state governments in Nigeria to embark on the following recommendations, such that our environment will begin to evolve in a manner consistent with best practices in the civilized world instead of the amorphous corridor developments we have all over Nigeria.

One, there is need for the establishment of states’ comprehensive master plans to be approved and signed into law by the various state Houses of Assembly. These master plans should be broken into constituent parts according to the local government areas of the state. The local government councils should now be the main drivers of the execution of the various phases of development, with support from the state government.

Each state under the Ministry of Physical Planning and Urban Development should constitute an Ombudsman Committee to be comprised of residents with proven integrity alongside ministry officials, who will monitor and ensure the enforcement of the provisions of the master plan.
In addition, the organized private sector and the academia should also be engaged and adopted into ensuring that best practices and optimum design proposals are adopted. These proposals should equally be subjected to critiques via town hall meetings for stakeholder inputs and engagements.

Most importantly, the land use patterns of the various states must be carefully looked at to ensure that there are adequate provisions for office parks, business parks, industrial parks, educational parks, hospitals, markets and others.
––Gbenga Onabanjo, founder, Go Forte Foundation, Lagos.