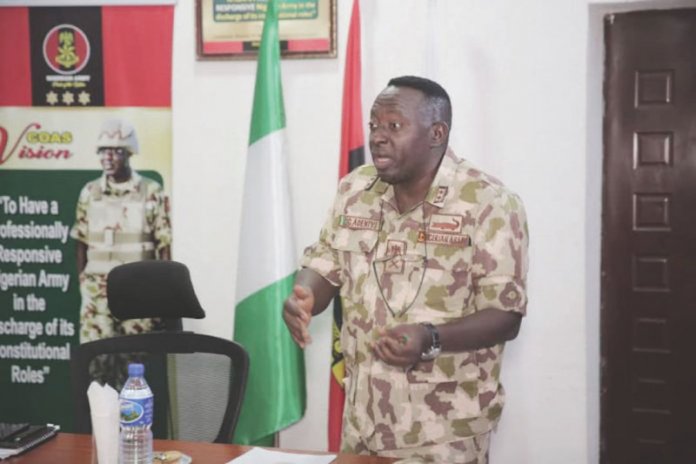 The recent ‘punitive’ redeployment of outspoken Major-General Olusegun Adeniyi, Theatre Commander of Operation Lafiya Dole, to the Nigerian Army Resource Centre (NARC), a military facility for strategy and innovation based in Abuja, might be the beginning of a valedictory phase of his audacious martial odyssey, writes Louis Achi

“Never forget that no military leader has ever become great without audacity.” This was the Prussian General and military strategist Carl von Clausewitz’s observation on military leadership.

On his part, the 16th US President, Abraham Lincoln noted that, “To sin by silence when they should protest makes cowards of men.”
These two historical perspectives address human behavior under intense trial. They also have a bearing on last week’s redeployment of Major-General Olusegun Adeniyi, Theatre Commander of Operation Lafiya Dole, to the Nigerian Army Resource Centre (NARC), a military facility for strategy and innovation based in Abuja, as a “research fellow”.

Flowing from a directive by the Nigerian Army High Command, in a circular that went out last Monday, dozens of top generals were asked to swap positions with effect from April 1.
Although in a related statement, Colonel Sagir Musa, army spokesman, told Nigerians the postings were a routine exercise intended to reinvigorate the system for greater professional effectiveness and efficiency, its timing and template spawned insinuations that Major-Gen. Olusgun Adeniyi was a key target.

The redeployments came a few days after Maj-Gen Adeniyi was seen in a viral video complaining about the brazen nature of Boko Haram attacks on troops. He also complained that insurgents were outgunning troops and that an intelligence failure was responsible for an attack that left dozens of soldiers killed penultimate week.

The video became an instant hit on the social media, sparking outrage and a relentless criticism of President Muhammadu Buhari and other senior military and government officials overseeing the war efforts. Adeniyi was replaced with Major-General Haram is F. Yahaya, the General Officer Commanding (GOC) of the Army’s 1 Division in Kaduna.

Adeniyi, who assumed command of the military’s counter-insurgency operations in the Northeast, in August 2019, had never left the top echelon of the Nigerian Army in doubt as to where he stood on pressing military issues concerning his brief, men and command. A gung-ho soldier, he has always betrayed a stern focus to conclude the lingering anti-insurgency campaign.

It was Adeniyi, who articulated a rationale and canvassed the creation of a Nigerian Army Aviation component to help its operations in the counter-insurgency warfare against Boko Haram in the Northeast. He pushed the position while receiving the National Assembly’s Joint Committee on the Army, led by Senator Ali Ndume of Borno State, which visited Maiduguri late last year, on a two-day oversight assignment of the frontlines.

In Adeniyi’s words then: “The only thing that needs to be given to the Army now is Nigerian Army Aviation with its own helicopters. There is a way you solve a problem that will change the game. The army needs combat helicopters to end the Boko Haram war. If we have it, it will not be deployed like air force assets, air force jets, which are for bigger strategic goals.
“These helicopters will sleep with us in the trenches; they will be with us in the frontline. These helicopters and the rifles are dispatched together. I know this has been on the table for years. When this is done, Nigeria can forget about the deadly Islamic sect.”

Adeniyi who further clarified the army’s request for its own combat helicopters, separate from those of NAF, explained that unlike the Air Force jets, the Army Aviation helicopters would perform more critical roles during attacks. In retrospect, obviously, Adeniyi could not have canvassed such big policy, big budget initiative without specific clearance from the Chief of Army Staff, Lt-General Tukur Buratai.

In both conventional and asymmetric warfare, no military commander worth his salt would tolerate the decimation of his troops on account of poor morale, inferior equipment, denial or inaccessibility of accurate intel. The army boss, himself a brilliant veteran of many bruising campaigns, can certainly not stomach such too.

Adeniyi would have failed his command and superiors if he failed to voice out serious shortcomings in his field campaigns. Beyond shadowy insinuations that his complaints were unauthorised, not properly channeled or inappropriate, a fundamental context from which to read his grievance is that the nation’s anti-insurgency campaign is apparently failing.

Witnessing his soldiers being killed and backed to the wall, his outcry indeed required some courage. Although redeployed out of the crisis theatre, his core message should provoke serious introspection from the army high command.

The Nigerian Army is the largest component of the Nigerian Armed Forces, and is responsible for land warfare operations. Lt-Gen. Buratai, the army boss is not a frivolous soldier either and enjoys the reputation of being a very focused and disciplined professional. He has brought these qualities to bear on his command, under obviously very challenging conditions.

But as the bloody, costly anti-Boko Haram counter-insurgency new-to-country war drags on for 11 years, the imperative of reviewing engagement strategies come to the fore. Reports of internal sabotage and leaked intelligence are worrisome and must be plugged. Actions at this level clearly require some audacity from the army high command.

Adeniyi’s redeployment comes under the jurisdictional purview of the COAS. No debate about that. But in what ways his reassignment would affect the battle progression, momentum, morale and tenor of the insurgency remains to be seen.

As he settles into his new duty space as a “research fellow,” he could rest easy, knowing that he had boldly played his role in the turbulent evolution of a new Nigerian state. He would also know that his long goodbye to the profession he loved has subtly kicked-in.
And just as the 16th US President, Abraham Lincoln aptly noted that, “To sin by silence when they should protest makes cowards of men,” in the face of paucity and debatable quantity/quality of arms/equipment, the top leaders of the army need to speak out.
To secure the lives and limbs of the nation’s gallant soldiers from needless decimation is certainly not merely a pious wish but an imperative and necessity for civilised survival.