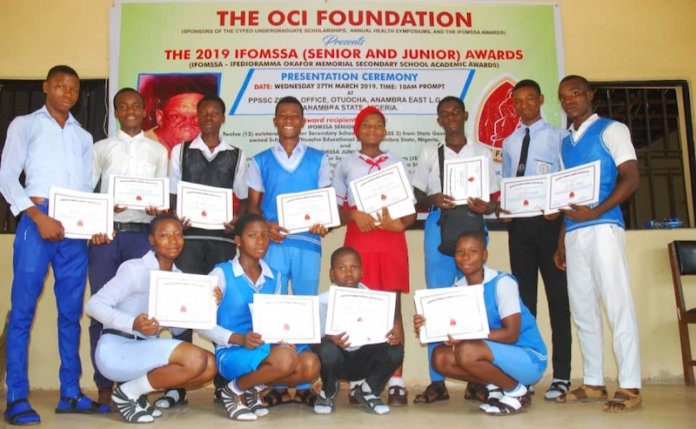 Presenting the awards recently at Fr. Joseph Memorial Secondary School, Aguleri, Anambra East Local Government Area, the OCI founder, Dr. Chris Ifediora, who was represented by the Legal Adviser to the foundation, Mr. Steve Ononye, said the annual event was the fourth and a total of 124 students have so far benefited from the scholarship scheme since 2017.

The founder, who noted that a total of 15 received the award in 2017; 22 in 2018; and 35 in 2019, promised to increase the figure annually.
He said the scholarship programme was instituted in honour of his late father, Ifedioramma Okafor, for his firm believe in education.

“The beneficiaries all underwent a one-off examination called the IFOMSSA Challenge, which was held on January 27 before they were selected.
“The 37 junior award winners are all Nsugbe indigenes enrolled at the Community High School, Nsugbe while the 15 senior category beneficiaries were selected across the three local government areas,” he said.

Ifediora said the aim of awarding the scholarship was to motivate young ones and spur students from the Omambala area of the state to attain greater academic successes.
“We at the OCI Foundation believe in the powers of an educated and a motivated mind. Such a mind can dream unimaginable dreams, surmount impossible obstacles, achieve the unachievable and explore limitless opportunities.

“The OCI Foundation wishes to give our younger ones the opportunity to bridge the gap between riches and poverty, and to arm them with the tools with which they will overcome failures and attain successes,” he added.

2023: Will Atiku Take Another Shot at the Presidency?

Muslims in Kano Pray for COVID-19 to End