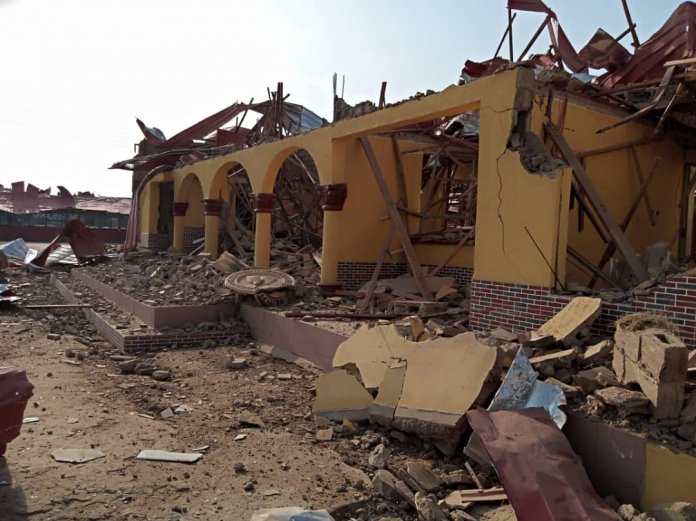 Deji Elumoye in Abuja and James Sowole in Akure

Apart from the varying degrees of injury inflicted on the victims, THISDAY observed that the explosion brought down over 60 buildings, consequently displacing hundreds of resident of the community.

Concerned with the spate of blast in the Southwest, pan-Yoruba socio-cultural organisation, Afenifere asked the government to investigate the explosion, which reports claimed, had already stoked humanitarian crises with the cases of forced displacement.

Also, former Anambra State Governor, Mr. Peter Obi, has expressed shock over the explosions while commiserating with the government and people of the state, thanking God that no life was lost in the disaster that could have claimed many lives.

However, THISDAY findings revealed that the incident occurred at about 1:00 a.m. when a truck that conveying quarry explosives from Ibadan in Oyo State to Auchi in Edo State exploded, creating an expansive gorge on the Akure-Owo expressway.

Findings further revealed that the explosion did not claim any life, though at least 13 individuals including driver of the truck and 60 building including churches and schools were destroyed at varying degrees.

Different eyewitness accounts told THISDAY that the explosion was heard in various parts of the state capital located at a distance of about 10 kilometres from the scene of the blast.

Among the buildings that were destroyed due to the incident, THISDAY observed, are the Possibility Ground for All Nations Church, Ilu-Abo and the Aina Awwuan International School located close to the scene of the incident.
One of the eyewitness accounts, also, revealed that some security operatives that escorted the truck at a distance directed the driver and occupants of the truck to alight shortly before the explosion occurred.

Another eyewitness account disclosed that the driver of the vehicle had observed there could be explosion at Shasha market, but did not pull up at the market due to the population of the area.

Shasha is a major market in Akure where food items like pepper, tomatoes, yam and cattle from the northern parts of the country are offloaded before transported to other parts of the state capital and suburb.

At a session with journalists yesterday, the Principal of Aina Awwuan International College, Mr Roland Kayode said the school’s security guards notified him about the incident, saying he thanked God that students were not in school due to the shutdown.

He claimed that the explosion had caused the school collateral damage in the tune of hundred of millions of Naira, thereby appealing to the state government to come to the aide of the school.

Also, the founder of the church, Prophetess Olayemi Adesida disclosed that she was in the church when the explosion occurred.

Adesida added that the building collapsed on her, though managed to find her way out of the wreckage shortly after the explosion.

The state governor, Mr. Rotimi Akeredolu yesterday visited the scene of the explosion alongside the Commissioner for Police, Mr. Undie Adie. The governor described the incident as an accidental discharge.

Adie, who addressed journalists at the scene, disclosed that the explosives were meant for a quarry company. He said the vehicle conveying the explosives, which was on transit through the state had developed mechanical faults before it exploded opposite Aina Awawa International College.

The commissioner added that security operatives who were escorting the vehicle gave the red alert which made the truck driver and another person to abandon the truck before it exploded.

Also at the scene, Akeredolu described the explosion as accidental discharge, urging everyone within scene to stay clear of the area as there might still be some undetonated explosives within the vicinity.

The governor said: “I have been briefed by the security chiefs that in the early hours of March 28, a vehicle in a convoy transporting explosives to a storage facility in a neighbouring state developed a fault while in transit along the Akure Owo Road about two kilometres from the Akure Airport.

“Security personnel and other individuals transporting the ordinances noticed smoke from the vehicle. After several attempts to extinguish the resulting fire failed, the vehicle and its consignment ignited causing a massive explosion that was felt in Akure and its environs.”

In a statement by its spokesman yesterday, Mr. Yinka Odumakin, Afenifere expressed concern at the rate of explosions at some southwest states peaking at three within two months.

Consequently, the organisation demanded an inquiry into the disaster in accordance with Ordinance and Fiream Acts “to be able to determine the type of ordinances that exploded.”
It said all accounts so far indicate that the explosion occurred from a possible fire incident from the vehicle that was carrying explosives through the state.

“Though the identities of the movers have not yet been known, the police have claimed they were escorting the ordinances (bombs) when they noticed some challenges before their destination.

“The inquiry should ascertain the identities of those transporting the ordinances, the origin of the ordinances, who assigned the escorting policemen and under what circumstance and the particular destination of the Improvised Explosive Devices.

“While it awaits the outcome of the inquiry, we must express our displeasure with the rate of explosions in Yorubaland in recent time. First was the blast in Ekiti State in early February with investigation blaming it on human error.

“Till date, we do not know the owners of the articulated vehicles found on the scene of the Lagos explosion while the number of casualties and level of suggested damage done to Catholic owned Bethlehem School suggested deliberate targeting.”

Obi, who thanked God that no life was reportedly lost, regretted the timing of the incidence, which according to him, was coming on the heels of the global problems caused by the Coronavirus pandemic.

He regretted that the sad incidence would render many people homeless “at a time when the ‘stay at home’ lifestyle was highly encouraged.

Though the cause of the blast was yet to be ascertained by the relevant agencies, Obi urged Nigerians to understand that humanity needed more love now than ever, especially in the face of all the challenges going on at the global and national levels.

“We as a people must understand that this is the time to show extraordinary love to one another and to humanity in general. Let us desist from unleashing terror and inflicting more pains and injuries on people”, Obi appealed to Nigerians.