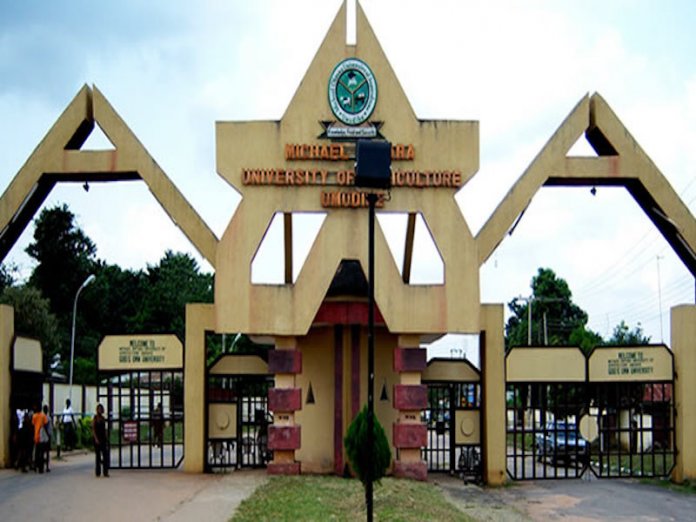 The Vice-Chancellor, Michael Okpara University of Agriculture Umudike (MOUAU), Professor Francis Otunta has expressed the management’s willingness to strengthen the College of Veterinary Medicine to boost its teaching and research activities.

He gave the assurance at the seventh oath-taking/induction ceremony of 2018/2019 veterinary medicine graduands, saying that “the university management attaches great importance to the training of veterinary doctors.”

To this end, he stated that the management has supported all programmes and activities directed towards the enhancement of research and learning in the CVM.
According to him, the 34 DVM graduands, who were conferred with the legal rights to practice as veterinary surgeons within Nigeria were “trained, mentored and equipped with the necessary skills and competencies.”

The VC noted that the Veterinary Council of Nigeria (VCN) has over the years sustained its collaboration with MOUAU in the training of veterinary surgeons, adding that the efforts have continued to yield desired fruits.

He also commended the Nigerian Veterinary Medical Association (NVMA) for its role in organising and enhancing the practice of veterinary medicine in the country.

In his remarks, the Dean, College of Veterinary Medicine, Professor Maduike Ezeibe said the college is living up to the mandate of the veterinary profession, which includes use of animals for research in order to improve human health and national economy.

“At present, we are working on how to improve the economy by reducing production cost for kilo of meat,” he said.

The dean stated that the CVM has already demonstrated with experimental feed that it could reduce the cost of meat production, adding that production cost for 1kg of broiler meat has been reduced by as much as N300.

“Also, the age at which the broilers mature for dressing was reduced to only four weeks which means quick turn over,” Ezeibe said, adding that “since this has worked for broilers it shall also work with pigs and other food animals.”

While lauding the university management for recruiting new academics for the CVM, he said other needs should be met, including the establishment of demonstration farm, laboratory and office spaces.

Ezeibe, who is a clinical virology, said the college is determined to produce graduates who are job creators instead of job seekers by “practicing what we teach.”