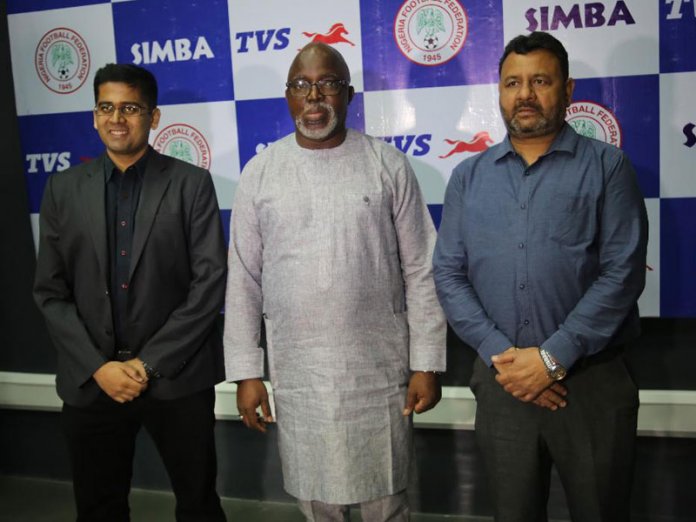 The Nigeria Football Federation (NFF) has described Simba Group as a worthy partner in the journey to make Nigerian football fulfilling for players and fans.

According to NFF President, Mr Amaju Pinnick, who spoke at the contract renewal signing ceremony between Simba Group and the federation in Lagos over the weekend, the commitment of the company to the development of Nigerian football and the Super Eagles is worth emulating.

Simba Group, distributors of TVS tricycle and motorcycle, extended its contract with the NFF for two years as the “Official Motorcycle and Tricycle of the Super Eagles” at a ceremony in Lagos on Friday.

Pinnick described the contract renewal by Simba Group as epochal as it marked the first time a partner was desirous to have its contract renewed before expiration.

He therefore commended Simba Group for believing in the NFF and the Super Eagles. “We are happy that despite the man-made turbulence of recent time, companies like Simba have done their due diligence and concluded with a strong belief in the NFF,” he said.

The NFF President added: “We are very happy to renew this contract with Simba for the next two years. I thank the Simba Group very profoundly. They will never regret their continuous belief in the NFF. We will do everything in ensuring that they have the desired leverage.”

Pinnick said the NFF was particularly delighted that despite the critical and dicey time for Nigerian football, “Simba, a company that has an untainted image, can say that it wants to partner with us. That goes to confirm that they believe in our integrity, probity and transparency in doing things.”

Speaking for Simba Group, Mr Mahendra Pratap, Business Head-Simba TVS assured NFF that the company was committed to working together with the NFF to help develop football further in the country.

He stated: “Like all of us here in Nigeria, we at Simba TVS are extremely passionate about football and proud of our Super Eagles. We are delighted to be extending this partnership, which will enable us work closely with the NFF, the Super Eagles and the Super Falcons.”

He reminisced that as the “Official Motorcycle and Tricycle of the Super Eagles, Simba TVS played its part during major football events for the nation. “Fans will recall the ceremonial escort TVS keke gave the national team as they departed for the FIFA World Cup in 2018 and the Africa Cup of Nations in 2019 and several other occasions,” Pratap further said.

Simba Group Head of Marketing, Mr Karthik Govindarajan added that Simba was in a joint journey to further develop football in Nigeria together with the NFF. “Like every Nigerian, we are proud of our footballers. And that is why we have been supporting them for the past two years. We are very happy to renew this agreement and partnership. It’s our passion for Nigeria and its football that makes us not to just support from the stands,” he further said.