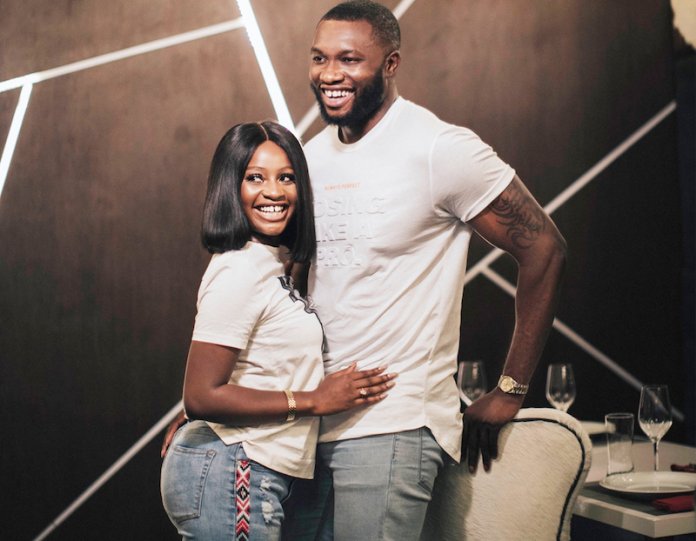 Nollywood actor and former Mr. Nigeria, Emmanuel Ikubese, is set to walk down the aisle with his fiancée, Anita Adetoye, popularly known as “Anita Brows”. The pair got engaged in 2019. The couple recently posted beautiful pre-wedding photos via their social media handles. They shared lovely photos which they titled RoadToBae2020. Some of the photos saw Anita, a celebrity makeup artist holding her fiancé’s head so gently and placing a kiss on it.

As it’s been observed, pre-wedding photos are fast becoming one of the beautiful parts of a wedding ceremony. It is an informal way of introducing the intending couple to their friends. It also gives people a peek into how beautiful the couple is. So, for celebrities Ikubese and Anita, many people had been looking forward to the couple’s pre-wedding photos and they did not disappoint.

Anita is the Founder and Creative Director, Anita Brows Beauty. Her time studying journalism in Dublin, Ireland, Media production at Lewisham College, London and then Marketing at Griffith College in Ireland provided her insight that she turned to her true passion, beauty. She was one of the first Nigerian beauty entrepreneurs to properly harness the power of social media, turning to then new image sharing platform Instagram, to build a following.

The couple’s wedding is one of the most-anticipated in 2020. In the photo, the couple wore matching outfits as they posed for the camera. When in October 2019, the actor and model Anita Brows had their introduction ceremony, it was so green and beautiful, with close family members in attendance. Now, their fans and friends get to see their beautiful fun pre-wedding pictures captured by Bedge Pictures.

For these two, it’s all fun, play and lots of love on the display with their pre-wedding pictures. Their introduction then was seen as a shock to many because the First runner-up, Mister World 2014 kept his relationship to Adetoye a secret. The duo hardly shares pictures of each other on their social media pages. Anita Brows only shared a video of herself getting ready for the introduction on her page. Ikubese would then share the video of the ceremony on his Instagram page Sunday night after the event.

The make-up expert Anita is prominent for working on top celebrities like Toke Makinwa, Annie Idibia and Mercy Eke, first female winner of the Big Brother Naija (BBNaija) reality TV show. She also featured as one of Forbes’ 30 entrepreneurs under 30 in Africa. The tall Nollywood actor, on the other hand, rose to fame after winning the male pageant in 2014.

Ikubese’s engagement with Anita followed a few weeks after he premiered his first project as a filmmaker, Kyaddala in Kampala, Uganda. Ikubese perfected his story writing abilities after writing some of the episodes of Basketmouth’s popular TV series, ‘Flatmates’, where he also acted alongside Yaw, Buchi, Senator, Kayode Peters, and Okey Bakassi. Emmanuel Ikubese’s acting run has seen him paired in a sizzling role with ace Nollywood actress Iretiola Doyle in the Mo Abudu blockbuster Forty.