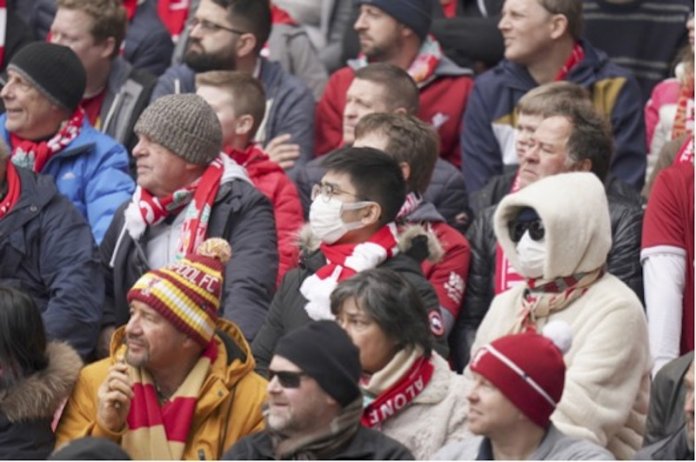 The Premier League said play will start on 4 April subject to “conditions at the time” but BBC sports editor Dan Roan says resuming on the date is privately deemed “almost impossible”.

Matches in Scotland, Wales and Northern Ireland are also off.
England’s international friendly matches against Italy on 27 March and Denmark four days later are off.

The EFL, which hopes to resume play a day earlier than the Premier League on 3 April, said clubs were also advised to suspend “non-essential activities” such as “player appearances, training ground visits and fan meetings”.

The suspension comes on a day of widespread sporting postponements worldwide.
Late on Thursday it was announced Arsenal manager Mikel Arteta had tested positive for the virus, and early on Friday Chelsea striker Callum Hudson-Odoi revealed he had been affected, while Everton say a first-team player has shown symptoms.

Earlier this week, several clubs – including Arsenal, Chelsea, Leicester City, Bournemouth, Manchester City, Juventus and Real Madrid – revealed they have either all or some of their playing staff in self-isolation.

Premier League chief executive Richard Masters said: “In this unprecedented situation, we are working closely with our clubs, government, the FA and EFL and can reassure everyone the health and welfare of players, staff and supporters are our priority.”
The Premier League said its “aim is to reschedule the displaced fixtures”, while the Football Association said “all parties are committed at this time to trying to complete this season’s domestic fixture programme”.

In total, 10 people have now died in the UK with the virus and there have been 596 confirmed cases across the country.
On Thursday Prime Minister Boris Johnson said suspending major public events such as sporting fixtures was being considered by the government but would be a measure primarily to protect public services, rather than delay the spread.

The EFL said: “This decision has not been taken lightly, but the EFL must prioritise the health and well-being of players, staff and supporters while also acknowledging the government’s national efforts in tackling this outbreak.”

Football has also been suspended in Italy, Spain, France, the Netherlands, Portugal and the USA.
These are deeply turbulent times in English football – and across world sport – which is having to face up to a period of disruption and dislocation unprecedented in peacetime.

Privately, all parties admit that resuming matches in early April – when the initial suspension will be reviewed – will be almost impossible.
But the hope is that next week a decision is taken to postpone Euro 2020 for a year, thereby freeing up space in the calendar to reschedule outstanding matches and complete domestic league seasons across the continent at some stage.

This action goes against the government’s highly controversial advice to continue staging sports events despite mass gatherings being closed or cancelled across the world.
But Department for Culture Media and Sport officials are known to be supportive of the decision football authorities have taken, given the need to protect employees and the mounting cases of players contracting the virus.

The problem is that the outbreak is expected to be at its peak in May and June so if the suspension keeps on being extended, some clubs may start to push for the season to be declared void, a nightmare scenario for clubs like Liverpool and Leeds, who both stand on the brink of long-awaited glory.
But as it stands, there seems to be a determination to complete the season if at all possible.

Simply stopping the season as it stands now seems unlikely given it would run the risk of legal action from clubs relegated or denied promotion.
The EFL is expected to ask the government for financial help for some of the clubs who now face even more financial uncertainty but there is no guarantee this will be possible in these extraordinary times.

Meanwhile, All Uefa competitions, including Champions League and Europa League matches due to be played next week, have been postponed because of the coronavirus outbreak.

The draws for the next rounds, set for 20 March, have also been postponed.
In the Champions League, Manchester City v Real Madrid, Juventus v Lyon, Barcelona v Napoli and Bayern Munich v Chelsea are all postponed.
Manchester United, Wolves and Rangers’ matches in the Europa League are off.

All Uefa Youth League quarter-final matches scheduled for 17 and 18 March are also off.
Uefa said further decisions on the scheduling of the postponed fixtures “will be communicated in due course”.
European football’s governing body has invited representatives from all 55 of its member associations to a meeting on Tuesday in order to discuss a response to the coronavirus outbreak.

The scheduling of Euro 2020 will be discussed at the gathering.
More than 125,000 people have been diagnosed with coronavirus in 118 countries around the world, according to the World Health Organization. The total number of deaths is more than 4,600.

Also, Football in France’s top two divisions has been suspended immediately “until further notice” because of coronavirus.
Ligue de Football Professionnel (LFP) – French football’s governing body – said the decision to suspend Ligue 1 and 2 was made “unanimously” by the board of directors on Friday.

The LFP said “collective interest must be placed above everything”.
“The urgency today is to curb the epidemic, protect the most vulnerable, and avoid displacement,” it added.
Games in France were already to be played behind closed doors after a ban on all gatherings of more than 1,000 people to prevent the spread of Covid-19.