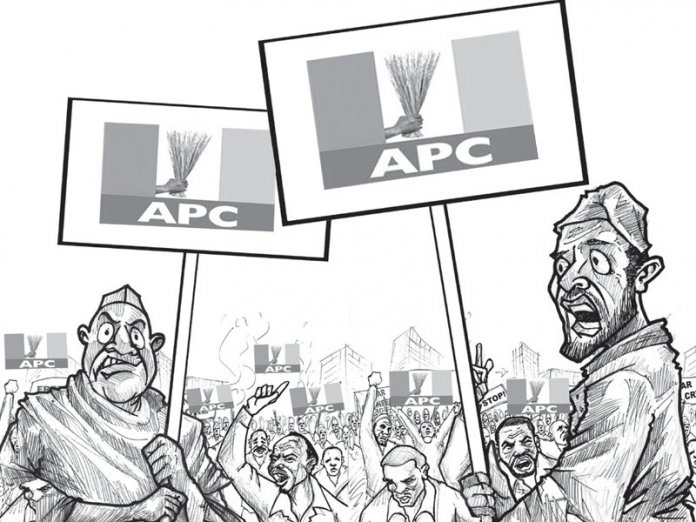 The All Progressives Congress should put its house in order

As the main pillar of the architecture of democracy, the health of the political parties in any country is a strategic national security issue. To that extent, the crisis within the ruling All Progressives Congress (APC) poses a threat to general peace and order in the country. We therefore urge the APC National Chairman, Comrade Adams Oshiomhole, and other officials of the party to live up to their strategic responsibility by using their internal mechanisms to resolve whatever problems they may have in the overall interest of our democracy.

There is a maxim that politicking comes to an end once electoral votes have been counted and results declared. The victorious candidates and their political platforms simply move on to deliver on campaign promises or what is called “democracy dividends” in this part of the world. But that conventional wisdom seems to be lost on the APC. What we have been witnessing since May 29 last year from their members is an unhealthy dissipation of energy in petty politics to the detriment of serious governance at practically all levels. More disturbing is that the judiciary is being increasingly drawn to fuel confusion in the party.

The person to blame in all this is President Muhammadu Buhari who, as leader of the party, ought to have called the combatants to order. He cannot pretend that all is well when his political party is in deep crisis. Neither can he afford to play the ostrich game or become Emperor Nero who fiddled while Rome burnt. A situation where within 24 hours, two courts of coordinate jurisdictions were giving contrary orders is an invitation to anarchy. And so is the abuse of state institutions like the police and State Security Service (SSS) whose men and officers are being deployed on guard duties at the APC National secretariat.

As we have noted in the past, our democracy has today lost its shape essentially because the political parties want to be democratic in a manner that advances only the personal interests of some politicians and not that of the society. Some 21 years into civil rule, we are indeed at pains to admit that internal democracy has been a very scarce commodity within Nigeria’s political parties. Like the Peoples Democratic Party (PDP) it displaced in 2015, the APC has become notorious for disregarding its own internal rules in the bid to achieve predetermined ends. Yet, the failure by the party to follow the democratic path in the conduct of its internal affairs has continued to pose grievous challenge for the larger polity. Also like the PDP, the ruling APC that came to power with the mantra of ‘Change’ has become an election-winning machine whose members do not necessarily share the same values in a political system where rent seeking is the order of the day. To worsen matters, the bickering and infighting within the party are not about the interest of the people but rather about cold calculations for the 2023 general election that is still three years away.

However, what we find curious, and at the same time worrisome, is the misuse to which critical state institutions are being deployed. In this era of security challenges in several theatres across the country, the police, SSS and other security agencies have more than enough on their hands than keeping vigil in the office of a political party. At a period the nation is plagued by a national health emergency in Coronavirus which has in turn affected the economy given the downturn in oil price, the APC crisis is a disgrace that should be halted. But for that to happen, the president cannot continue to be aloof. The time to show leadership is now.