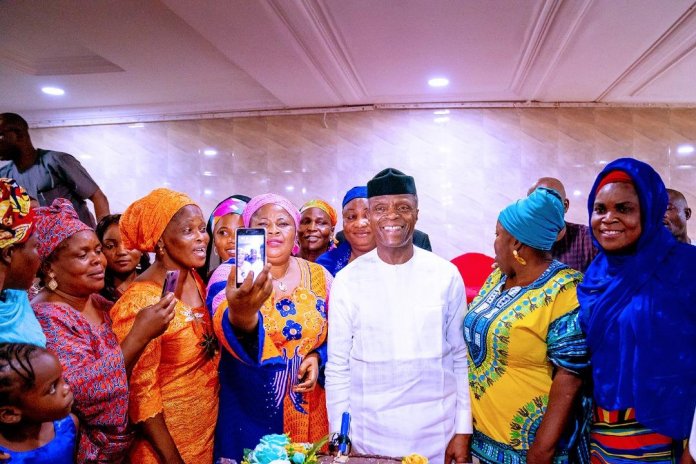 A group of market women from Karu and Jikwoyi, Abuja suburbs, threw a surprise reception for Vice President Yemi Osinbajo Sunday to celebrate with him on his 63rd birthday.

This was after former Head of State, General Yakubu Gowon (rtd), and a number of State governors had worshipped together with Prof. Osinbajo at the Aso Villa Chapel thanking God for the Vice President’s life.

In celebration of the day that coincided with the 2020 International Women’s Day, the women sang birthday songs for Prof. Osinbajo as he joined them at the De George Resort in New Karu. The women numbering over 100 held a short reception for the VP and took turns taking photographs with him.

Addressing the women during the brief reception in his honour, Prof. Osinbajo thanked them for their solidarity and prayed for God’s continued blessings in their lives and families.

“All of you and your children will prosper in this land and experience promotion. Everything that you ask from God he will do for you, so my next birthday will be bigger and better than this and I will attend your own birthdays too.”

From the brief interaction with the women groups, the Vice President proceeded to the Jikwoyi Mini Stadium where he met with the management and players of FC Liberty International.

He spoke to the players about the importance of hard work in everything that they do, noting that “everything can be achieved by hard work. Talent is good but even if you have very little talent, with hard work, you can achieve what you want in life.”

Welcomed by the General Manager of the Club, Mr B.O.B. Oluwale, the Vice President watched a brief training session of the team before interacting and taking photographs with the players and staff.

He said players of the club had excelled in local and international competitions and some had secured professional contracts to play football in bigger clubs at home and abroad.

Earlier at the Aso Villa Chapel where a Church service was held to mark the occasion, an SSS 1 girl, Damilola Oriowo, who had jumped over a fence to meet the Vice President during the 2019 electioneering campaigns in Kubwa, Abuja, joined other Nigerians at the service to celebrate Prof. Osinbajo’s 63rd birthday.

Damilola and her parents were recognized at the service by the VP and the Oriowos joined in the VIP photo session after the church service. The Vice President mentioned how Damilola had made determined efforts to personally meet him during the 2019 electioneering campaigns, praising her resolve and welcoming the friendship.

During the service, General Gowon, who prayed for God’s continued blessings and guidance for Prof. Osinbajo, commended the commitment and dedication of the Vice President to the service of the nation.

According to him, “let me join all the good people, sons of God here, to wish you a very happy birthday, and to ask for God’s blessings on you; and to say how much we all appreciate you.

“You are the one who is standing for all us, Christians throughout this country. When the darts are thrown at the government whether individually or collectively, and when everything is said, we know it is you that is standing firm for all of us who are of faith and I will like to say to you that we all appreciate you.

“We know that you are doing an exceptionally herculean job and we are proud of you; and continue to bless you and wish you many happy returns.”

In the same vein, staff of the Vice President’s Office on Sunday played a novelty football match to mark the occasion with the Department of State Services (DSS) team emerging winner of the inter-unit mini football competition.

The competition held at the football pitch of the Family Worship Centre, Abuja had staff of the Media, Protocol, Police and Department of State Services (DSS) units, competing for the top position.

Prof. Yemi Osinbajo who was on ground to present trophies to the teams at the end of the game, commended the staff of his office for their unity and for rejoicing with him on his birthday.

The staff joined by friends of the Vice President also joined the celebrant in cutting a cake presented to him to mark the occasion.

All prizes won by the various teams have been donated to charity in the spirit of the celebration.