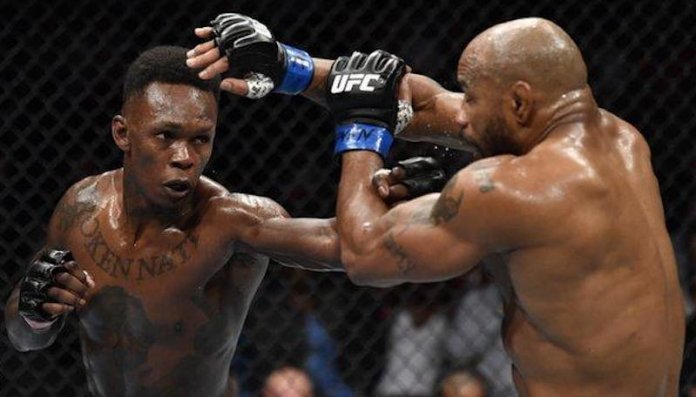 Despite the condemnation that trailed Nigerian-born New Zealander Israel Adesanya’s cagy win over Olympic wrestling medalist, Yoal Romero at UFC 248 in the early hours of Sunday in Las Vegas, the winner, has explained that he picked the victory based on his opponent’s tactics.

Adesanya had defended his middleweight title with a unanimous decision win over Olympic wrestling medalist but when he was adjudged as the winner, the crowd booed the unimpressive show by the two fighters.

His performance did little to satisfy the crowd, who booed for long spells of the fight.

With fans jeering his post-fight interview, Adesanya said: “It was a hard fight but, cliche, I did what I had to do. I picked him apart. The legs don’t lie.

“He plays the game in lulls. He tries to get you into a false sense of security. My coaches said I need 25 minutes of sharpness, but it’s hard to engage with someone who doesn’t want to dance. I touched him up. And still.”

Asked whether he had any concerns about the judges potentially scoring the fight for Romero, Adesanya said: “As long as they didn’t listen to the crowd, I was fine.”

A frustrated Romero was cheered by the crowd after the fight and, pointing to the fans, claimed “this is my victory” before criticising Adesanya for not engaging with him during the fight.

“The people pay because they want to see a good fight. Not this. You need to respect the people. They pay for a fight, not for running.”

In a cagey, tactical contest that lacked the excitement many fans anticipated, Nigeria-born New Zealander Adesanya, 30, peppered the 42-year-old Cuban with powerful leg kicks to take victory on the scorecards.

The bout started almost at a complete standstill, with Romero static in the middle of the octagon, holding a high guard.

Adesanya found more rhythm in the second half of the fight, however, scoring consistently with powerful kicks to Romero’s lead leg.

Romero’s attacks were few and far between, and the judges’ scorecards read 48-47, 48-47, 49-46 as Adesanya negotiated his first title defence since winning the belt against Australian Robert Whittaker in Melbourne last year.

In a fight contested at an incredible pace from start to finish, 30-year-old Weili started slightly faster, but the five-round experience of former champion Jedrzejczyk, 32, helped her come on strong in the third and fourth.

They threw everything at each other in a blistering fifth round. A huge left hook from Weili appeared to break Jedrzejczyk’s nose, while a big shot from the Pole seemed to briefly wobble Weili.

One judge scored the contest 48-47 to Jedrzejczyk, but the other two scored it 48-47 for Weili, who cemented her spot as the world’s top 115lb female fighter after a bout that will live long in the memory.