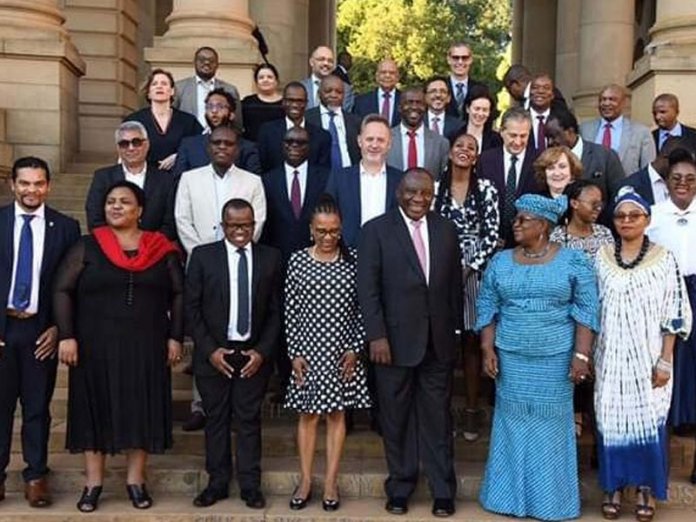 He said, “I congratulate Dr. Ngozi Okonjo-Iweala who served as the coordinating minister for the economy/finance minister in my cabinet, on her appointment as a member of South Africa’s Presidential Economic Advisory Council.

“As a two-time minister in Nigeria, you left indelible marks as an astute manager of the nation’s economy and resources.

“I am delighted that you have continued to place your substantial wealth of experience as a development economist at the service of many nations and international organisations to aid global growth and progress.

“I have no doubt in my mind that you will excel in the new assignment.”

Also, Okowa has congratulated Okonjo-Iweala, on her appointment.

In a statement by his Chief Press Secretary, Mr Olisa Ifeajika, in Asaba, Okowa said he was elated to hear of Okonjo-Iweala’s appointment by President Cyril Ramaphosa to head South Africa’s PEAC.

He described Okonjo-Iweala as a brilliant, competent, world-class economist and international development expert whose works over the years distinguished her globally.

He stated that the former minister remained a worthy ambassador of Delta and a great role model for the girl-child.

“I am elated to hear of your appointment by Ramaphosa.

“Your appointment is indeed, a testament to your competence and experience as a renowned economist and international development expert.

“On behalf of my family, the Government and people of Delta, I congratulate a worthy ambassador of Delta and Nigeria, Dr. Ngozi Okonjo-Iweala, on her appointment into South Africa’s Presidential Economic Advisory Council as not just a member but as chairman.

“As you take on this onerous but distinguishing assignment in another country, I pray and urge you to re-enact that, which you have always done – bringing pride and honour to Delta and Nigeria.

“It is without doubt that your pedigree and impeccable footprints in monetary and economic administration in Nigeria and at the World Bank stood you out for this sublime international assignment.”

“As you continue in this remarkable trajectory, we wish you success and in all your other endeavours,” Okowa stated.