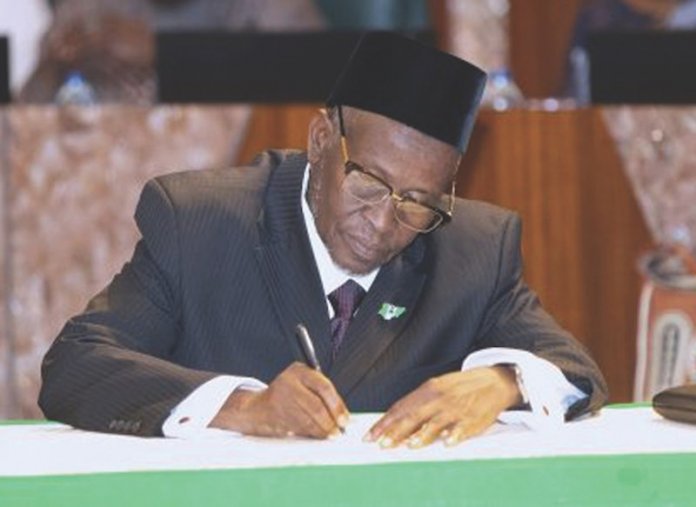 The Supreme Court persevered in error last week, when it upheld its judgment on Hope Uzodinma as the governor of Imo State. Shola Oyeyipo writes

Only God boasts infallibility. Any human organisation, including the highly revered apex court in Nigeria, the Supreme Court cannot pride itself as incapable of making grievous mistakes. Thus, to many people, they made a grave mistake in a recent judgment awarding the Imo State gubernatorial seat to Hope Uzodinma of the All Progressives Congress (APC) in the March 9, 2019 election in Imo State.

Nigerians and observers around the world have yet to rationalise the Supreme Court decision that upturned the result declared by the Independent National Electoral Commission (INEC) where the ousted, Emeka Ihedioha of the Peoples’ Democratic Party (PDP) polled 273, 404 votes to win the elections.

His closest rival was Uche Nwosu with 190, 364 votes and then Ifeanyi Araraume (114, 676). But Hope Uzodinma of the APC, who came a distant fourth with 96,458 votes is now governor after votes from 388 polling units were arbitrarily added by the court, bringing Uzodinma’s result to 309, 753 while the votes by others remained what they were.

Unlike no other in recent past, the judgment brought the apex court to disrepute and its integrity as the last hope of the common man was thoroughly questioned by Nigerians.
A member of the Editorial Board of BusinessDay Newspaper, Chido Nwakanma wrote: “The judgment of the Supreme Court has gifted Imo State with a governor, whose party did not win one single seat in the State House of Assembly. It is the nature of strange judgments. Walter Scott was right. The Supreme Court has weaved a tangled web, because the motive was wrong ab initio. Absurd.”

In his assessment of the judgment, the Chairman, Editorial Board of THISDAY Newspapers, Mr. Segun Adeniyi stated that: “Taken together, there are far too many grounds for inconsistencies and loopholes on which lawyers and the general public now question both the integrity and indeed the professional competence of the Supreme Court.

“It is a sad day for the nation if the apex court displays traits that undermine confidence in the quality of justice available to the people. It is even more tragic, when the slant of decisions tempts the public to suspect that these respected men and women may have succumbed to partisan pressures.”
While the feeling persisted that the judgment was more political than legal, some concerned Nigerians had expected that last Tuesday’s sitting of the Supreme Court on an application filed by the Ihedioha, to review the judgment would present the Chief Justice of Nigeria (CJN), Justice Tanko Muhammad-headed court an opportunity to reverse its obvious error, but it didn’t. They opted to persevere in their error.

Though the seven-man panel of the apex court threw out Ihedioha’s call for a review of the judgment on the grounds that it had no power to entertain his appeal that does not take away the fact that there are many unanswered questions in the “absurd” judgment it handed out by the respected court.
Though there is the saying that after the Supreme Court, aggrieved persons can only appeal to God, it may seem the people are helpless in this case, even the dissenting judgment by Justice Chima Centus Nweze, who set aside the January 14 judgment of the Supreme Court by describing it as a “nullity and in bad faith”, was indicative of the fact that the judgment could have gone the other way.
He was not among the first seven-member panel that nullified Ihedioha’s election on January 14. He replaced Justice Amiru Sanusi, who retired from the apex court in the same month.

In their majority verdict read by Justice Olukayode Ariwoola, the remaining six members of the panel insisted that the Supreme Court judgment would stand but that does not take away the fact that it would haunt the Nigerian democracy and electioneering for a long time.
That much did Nweze say in his objection to the popular verdict when he maintained that declaring Uzodinma as governor was wrong on the grounds that the new APC governor misled the court into unjust conclusion with the unverified votes in the said 388 polling units.

“In my intimate reading of the January 14 judgment, the substance of Ihedioha’s matter was lost to time frame,” Nweze said, arguing that since there is a record of when the court set aside its own earlier judgment,’ time frame is not enough ground to deprive anyone of his or her right. This Court has powers to over rule itself and can revisit any decision not in accordance with justice,” he said.

Like every other critical mind that had expressed disagreement with the judgment and the fact that the apex court usurped the responsibility of INEC by awarding electoral victory to a political party against another, in an election conducted by INEC was not lost on all.
In what is the opinion of every critic, who felt there is a foul play in the apex court judgment, Nweze noted that “The decision of the Supreme Court in the instant matter will continue to haunt our electoral jurisprudence for a long time to come.”

According to him, the court arrived at its conclusion despite the fact that there is no concrete prove that he satisfied other constitutional provisions after Uzodinma and his party misled the court to accept the allegedly excluded results in 388 polling.
Another major fault in the hasty judgment was that when the results of the said 388 polling units were added to give the APC candidate victory, results polled by other candidates were not reflected, even if for mere record sake.

Still speaking the mind of Nigerians, Nweze noted the non-credibility of the results from the additional polling units, because it did not come with corresponding number of accredited voters in the polling units.
Another very salient issue raised by Justice Nweze was that during the election tribunal, Uzodinma himself admitted that he hijacked the result sheets from electoral officers and completed the result sheets by himself.

Nweze, who holds the view that his colleagues on the bench miscarried justice, categorically stated that, “This court has a duty of redeeming its image. It is against this background that the finality of the court cannot extinguish the right of any person.
“I am of the view that this application should succeed. I hereby make an order repealing the decision of this court made on January 14 and that the certificate of return issued to the appellant returned to INEC.

“I also make an order restoring the respondents as the winner of the March 9, 2019 governorship election.”
From all indications, despite all the unacceptable arithmetic that didn’t add up, the justices of the Supreme Court, except one, imposed a government on the people of Imo State but the fact in this matter will not go away.

There are so many unanswered questions that cast a huge shadow of suspicion on the integrity of the court especially, in this dispensation, which make people to believe that the appointment of the CJN was influenced for such assignments. Yet, the Supreme Court must not lose sight of its integrity on the altar of politics.