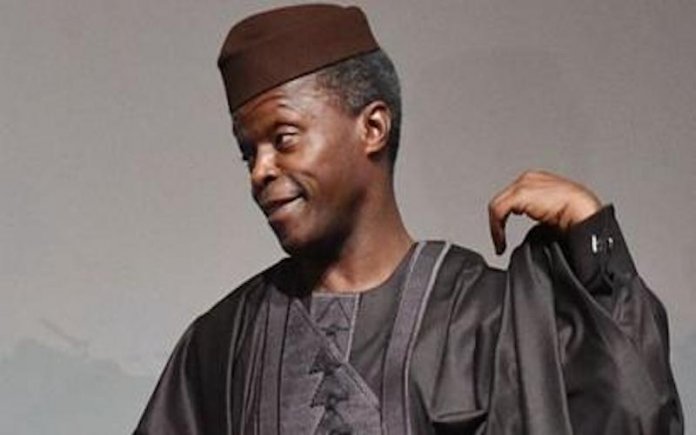 The All Progressives Congress (APC), its National Leader, Asiwaju Bola Tinubu, the Senate President, Dr Ahmad Lawan, his deputy, Ovie Omo-Agege and the Speaker of the House of Representatives, Femi Gbajabiamila have

felicitated with Vice President Yemi Osinbajo as he clocks 63 today.
In separate statements they commended Osinbajo for his commitment and dedication to the development of the country.

The National Publicity Secretary of the party, Mallam Lanre Issa-Onilu, said the party noted the vice president’s massive contributions in the success of the APC-led administration’s Social Investment Programme (SIP), which he said, was reputed to be Africa’s biggest and most ambitious social welfare policy for the most vulnerable in our society.

He said: “On this auspicious day, we salute the patriotism, doggedness and untiring efforts of the vice president in partnering and assisting President Muhammadu Buhari, in tackling insecurity, fighting corruption and resetting the nation’s economy on the path of growth and development.

“Our great party also applauds the vice president’s headship of the National Economic Council (NEC), a development, which has ensured a more beneficial synergy between the federal and state governments in quickly and frontally addressing issues that are pertinent to the welfare of Nigerians.”
The ruling party said it was not in any doubt that the commendable partnership of the president and the vice president would take Nigeria to the next level of peace, progress and prosperity.

In a message released by his media office, Tinubu recalled Osinbajo’s contributions to the success of his administration as governor of Lagos State.
He said: “Erudite legal luminary, Osinbajo’s reputation for loyalty, dedication, selflessness is well deserved. He is resolutely committed to the causes he believes in.

“Osinbajo has proven to be a dependable ally of President Muhammadu Buhari, working harmoniously with the president to deliver for the country.
“I recall with fond memories the time we worked together along with other technocrats to help lay a solid foundation for an egalitarian and prosperous Lagos.

“We used the instrumentality of the law to advance the course of restructuring and get for Lagos what rightly belongs to her.
“Most of the landmark cases Lagos won at the Supreme Court bore Osinbajo’s imprint.

“I wish his wife, Dolapo Osinbajo, and other members of the family a most memorable celebration.”
In his message to the vice president, the Senate President, Dr Ahmad Lawan, said Osinbajo is exceptionally loyal to the Buhari administration. According to him, Osinbajo has shown exceptional loyalty in government and dedication to his duties. He noted the many outstanding achievements of Osinbajo as an erudite lawyer, distinguished scholar, revered clergyman and political leader.

“Professor Osinbajo has brought his diverse experiences to bear on his role in government and demonstrated that one can actively participate in politics at the highest levels and yet maintain personal integrity and high reputation,” Lawan said.

The Senate President joined his family, friends and associates in celebrating a great Nigerian leader and role model.

The Deputy Senate President, Ovie Omo-Agege was not left out. He described the vice president as one of the prime figures driving APC and Buhari’s change agenda.

According to him, Osinbajo will long be remembered for his endless cerebral contributions towards achieving genuine change and his active role towards viable reforms in the country.

He said: “He is not only a successful lawyer; he was a member of the International Bar Association, the British Institute of International and Comparative Law and has served in the Nigerian Body of Benchers and the Council for Legal Education of Nigeria with a great record of active involvement in the pursuit of legal education reform in Nigeria.

“Today, I join his family, associates and other citizens of our great country in wishing our dear Vice President a happy birthday and many more years of active contribution towards the upliftment of the masses and our people-focused agenda.”

Also yesterday, the Speaker of the House of Representatives Hon. Femi Gbajabiamila extolled the virtues of the vice president.

Gbajabiamila said Osinbajo is a very courageous and patriotic human being whose services to the nation would always be remembered.

The speaker said that as someone who had known the vice president for decades, “he personifies humility, sagacity, courage, forthrightness, sincerity and patriotism.”

Gbajabiamila described Osinbajo as ‘very dependable in all ramifications.’

He said: “Apart from being a reliable human being, the VP is one of the most honest people I have come across in my life. I make bold to say that the VP has qualities worthy of emulation by other Nigerians.
“On his 63rd birthday, I wish Vice President Prof Yemi Osinbajo continuous good health and God’s protection.”

Born on March 8, 1957, Osinbajo became the Vice President in 2015 alongside President Muhammadu Buhari. The duo was re-elected for a second term last year.