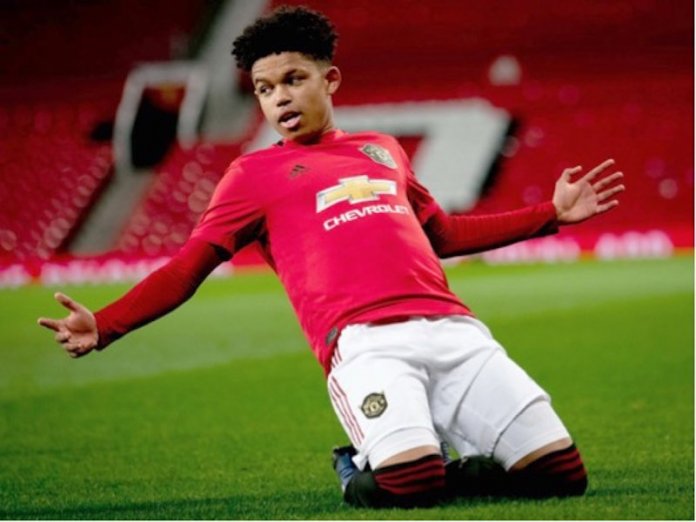 Manchester United have fast-tracked an agreement for rising star Shola Shoretire to secure his immediate future to the club.

The 16-year old is already regarded as one of the best ‘No 10s’ in Europe for his age and was a target for elite sides across the continent.
He is still at school yet is expected to play for the U23s this season and could even make an impression on the first team squad before the end of the year.

The Newcastle-raised teenager can’t sign a professional contract until he turns 17 next February but is so highly regarded by United that they have moved to put a scholar year in place with the promise of a lucrative first professional deal attached.

Shoretire was at school on Friday studying for his GCSEs, before heading to Old Trafford to play a starring role and score in the U18s FA Youth Cup quarter final win against Wigan.

Under-18 coach Neil Ryan said: “He was at school today, all day! Then he came over to Old Trafford to play. It’s incredible really. Different day for him compared to other players. We want to keep them humble, hard-working.”

He joined the club as a 10 year old and was promoted by head of first team development Nicky Butt to the United academy tour of Austria in 2018 when he was just 14.

He became the youngest player to appear in the UEFA Youth League in December 2018 aged 14 years 314 days when introduced as a substitute in a 2-1 win against Valencia.
Shoretire featured at the Milk Cup in Northern Ireland at the age of 13 in 2017.The diminutive Shoretire can play on the wing or up front and has been described as an ‘exceptional’ talent. Shoretire is eligible to represent Nigeria but was invited to train with England’s juniors two years ago.

Shoretire is not a scholar yet at Manchester United and schoolboys his age are usually only preparing for their GCSEs. The only papers Shoretire might be filling out in the near future at Carrington are contracts.

Shoretire only turned 16 on February 4 and should be with the Under-16s. Instead he is with the 18s, supplementing revision with precision and scoring in the FA Youth Cup at Old Trafford, helping United through to the semi-finals for the first time since 2012.

United youth team almanacs will have heard of Shoretire before he debuted in the Uefa Youth League at the age of 14 years and 314 days last season. Like Angel Gomes, Callum Gribbin, and other callow predecessors in the digital age, Shoretire went viral on social media before he was permitted entry to 15 certificates at the cinema.

With that comes a near-unattainable level of expectation. United will play Chelsea, their five-year monopoly of the Youth Cup ended by Mason Greenwood last season, in the last four and some United fans will inevitably cast their minds back to the last memorable youth team that started at Stamford Bridge: Pogba, Lingard, Keane.

The Class of 2011 remains United’s last triumphant Youth Cup squad, though United and Chelsea met again in the last four in 2012. Seven of the players involved in the uplifting 4-3 triumph over Chelsea last year have gone onto debut for the club yet Greenwood, Brandon Williams, James Garner et al. were ejected at the second hurdle. The feeling is the current class have defied expectations.

Much of the talk in the wake of Manchester United’s FA Youth Cup win against Leeds has been focused on Hannibal Mejbri and Teden Mengi.
Rightly so. The 17-year-old pairing are incredibly talented, have both shown good leadership and are two of the most highly-rated prospects at the club. But Shoretire is even younger and put in a good performance for United at Old Trafford.

As Shoretire came out at the Theatre of Dreams, he was 16 years and three days old. That’s 260 days younger than Angel Gomes was when he made his first-team debut for the club, replacing Wayne Rooney from the bench.

There’s still time for Shoretire to equal that and the comparisons aren’t completely ridiculous.
Like Gomes, Shoretire’s stature is small. He’s not chunky in the way that Dillon Hoogewerf is. He’s not got the physique of Mark Helm and he’s not even got the same presence as Hannibal Mejbri

But Shoretire is skilful and has enough about him to influence games despite his height, age and relative frailty.
At 14, he became United’s youngest ever player at under-18 level, making his UEFA Youth League debut and setting a record in that competition too.

In the Milk Cup, he played two years up and scored a couple against players twice his size. At the 2019 Sparkasse & VGH Cup, a small-sided indoor tournament in Germany, Shoretire’s skills were delightful. Now he’s done the same in the FA Youth Cup.

He was unfortunate to go off with a small calf injury in the second half. In an atmosphere befitting the historic rivalry of United vs Leeds and Lancashire vs Yorkshire, Shoretire coped well.

He offered an outlet for United on the counter, taking the ball from set-pieces and holding it up well.
For someone of his stature, it shows an impressive maturity and good decision-making. His strength, not necessarily in the physical way for a 16-year-old is excellent to see.

Born in 2004, Shoretire has a long way to go. As seen with Gomes, patience will be key. But with 11 appearances in the league and two in the FA Youth Cup, it’s been a good start to his time in the under-18s set-up.
With a brother half a decade below him, the Shoretire name might pop up again in a few years for regular watchers of United’s youth teams.