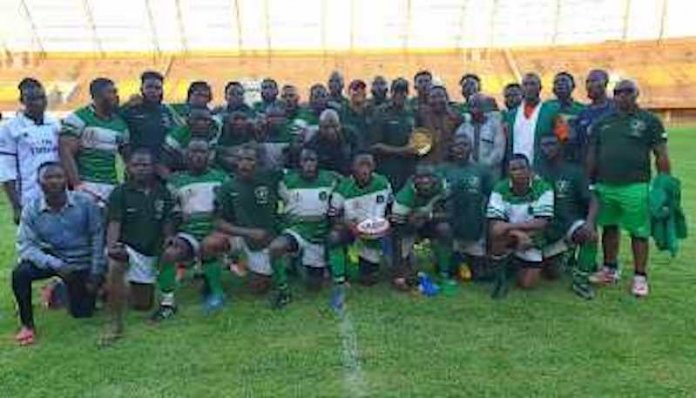 The World Rugby Services Manager (Africa), Steph Neil, yesterday charged Nigeria Rugby Football Federation (NRFF) on the need to put in efforts at moving up the ladder in ranking in Africa.

The World Rugby representative, Neil on a working visit to Nigeria gave the charge at the interactive sessions with the media at the Rugby House, Giwa Ayinde, Masha in Lagos.

Neil said that he was on a fact finding mission to Nigeria to access the level of development of rugby and to also see the facilities and infrastructural development of the sport.

The global body representative said he was amazed to see quite a lot of youths on the street those he described as potentials for the grassroots development of the sport in Nigeria.

“I have gone for three or four walk on the street of Ikoyi and Lekki, what I found there are amazing. I think Nigeria is an exciting project.

“As a country, the federation should not be happy sitting 15th or 16th on the Africa ranking, especially with the population of the country put into consideration.

“I have seen prospects in Nigeria and an advantage; Nigeria can present the next generation of Rugby players the world will be proud of. It is a big challenge to all of us.

“I walked through the streets of Lagos and I am amazed with the numbers of young people with energy. I think there is a genetic preference for potentials among those that I have seen, he said.

Neil said that Nigeria could develop the game through grassroots engagements in schools and catch them young initiatives.

“There are layers of development which has worked for other countries which can equally work for Nigeria which is developmental plans of the games especially participating in regional competitions.

“There are structures at which those things can work; and it starts with the “Kick Off we must start something now; get teams playing the game and the participants as well.

“The second thing is about finance, which is a problem in Africa, but can be managed by working with what is available and what we have because there are quite other few steps.

“World Rugby is based on performance and participation in the World Cup which is like a Trojan horse in attracting investments to the sport, he said.

Neil said that to get the rightful result in the development of Rugby in Nigeria, participation in regional and international tournament would be a key factor.

“Participation in competition such as West African Rugby Series (WARS), regional competition and other international tournament is key to development.

“The first thing the coach should get is the experience, it is a clear path for progress. The coaches will get to improve as they gets to officiate more.

“Rugby players can be targeted in schools as part of grassroots development. They should be scouted for in primary, high school and tertiary institutions. These are processes for talent identifications, he said.

Neil said that the driving force of the development of the sport lies with the office of the National Technical Director an office he reckoned had a lots of influence on planning for the games.

“The driving force of the development of Rugby should be the National Technical Director. He must have gone through the full cycle of all the coaching courses.

“The National Technical Director can create the right atmosphere for the young people on the field and get them on the right path.

“I have watched a couple of games Nigeria played, one in Johannesburg Series and when they played against Madagascar and also the regional tournament in Côte d’IIvoire,” he remarked.

He said that its a good that Rugby is returning to the National Sports Festival (NSF) but that NRFF has to ensure that they take charge in the administration of the game for proper monitoring.

The World Rugby Services Manager (Africa) charged NRRF to also uphold the standard of the sport during the NSF.

editor - July 30, 2021 3:10 am
6
GUEST COLUMNIST BY PAT UTOMI The evidence that Nigeria needs redemption is everywhere. It’s not normal that pigmies exit and their cohorts shout us deaf about...

editor - July 30, 2021 1:30 am
1
Eddy Odivwri There is no doubt that the separatist agitator and self-acclaimed leader of the Indigenous People of Biafra (IPOB), Mazi Nnamdi Kanu, is perceived...