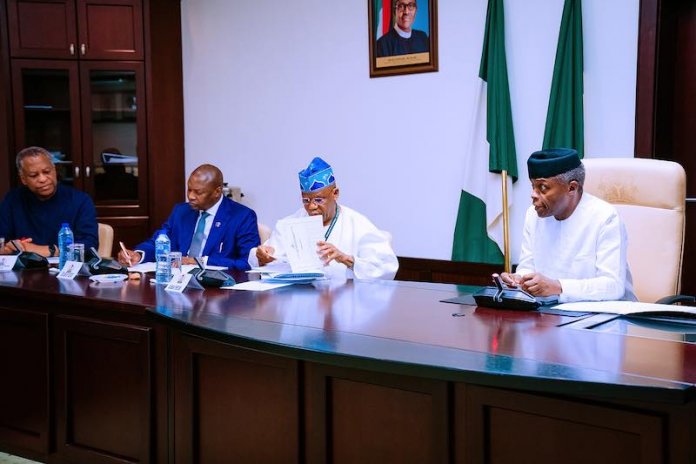 A new committee to help curb the proliferation of small and light arms was inaugurated in Abuja yesterday with Vice President Yemi Osinbajo as chairman.

The presidential committee, which had its inaugural meeting in the State House, has as members, top security chiefs and other stakeholders.

The committee’s debut was the fallout of the decision of the last National Security Council meeting presided over by President Muhammadu Buhari with the president’s directive authorising Osinbajo to chair the panel.

The committee was saddled with the responsibility of reviewing the report of the Presidential Committee on Small Arms and Light Weapons (PRESCOM) set up by the administration of former president, Dr. Goodluck Jonathan, and factor in the current realities.

A statement by the vice-president’s spokesman, Mr. Laolu Akande, explained that the presidential directive for the review of the report of PRESCOM was meant to secure a solution to the proliferation of small arms and light weapons in the country.

According to the statement, the scourge of insurgency in the North-east and other security challenges plaguing the country are fuelled by the influx of small arms and light weapons.
“At the last National Security Council meeting, President Muhammadu Buhari had directed the vice president to chair a committee to review the report of the Presidential Committee on Small Arms and Light Weapons (PRESCOM) constituted in April 2013 by the then federal government.

“In line with that presidential directive, Prof. Osinbajo on Monday (yesterday) chaired the inaugural meeting of the review committee, calling for the development of clear cut, a specific line of action to address the serious problems of small arms and light weapons, many of which fuel the insurgency in the North-east and other security challenges in the country,” the statement said.

At the meeting yesterday, Osinbajo said the gravity of the proliferation of small and light arms in the country made the setting up of the review committee compelling.

“The problem we have at hand is really enormous,” Osinbajo was quoted as saying, adding that the president is keen on finding effective and prompt solutions to the menace.

Also in the committee are the representatives of the Director-General of the Department of State Services (DSS) and the Ministry of Defence.