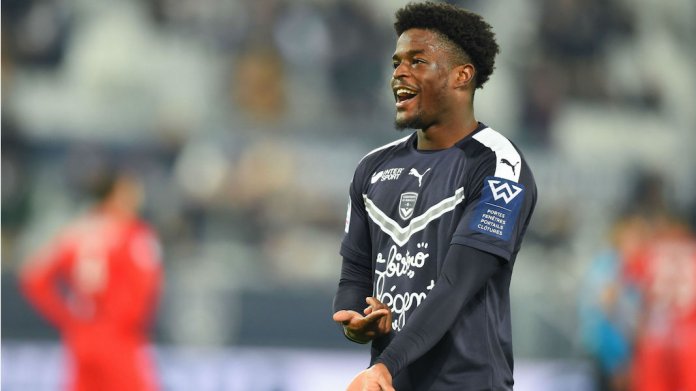 Super Eagles duo of Lille’s of France forward, Victor Osimhen and Villarreal front-man of Samuel Chuwueze may be enjoying rave moments in Europe but it is Bordeaux starlet Josh Maja that holds the record of the most efficient Nigerian striker playing in the top five European Leagues Among the Nigerian players to be involved in 10 games or more in the English Premier League, Spanish La Liga, German Bundesliga, Italian Serie A and French Ligue 1, the Bordeaux number, nine Josh Maja has the best goals-per-minute ratio, scoring a goal every 123 minutes. He has logged 615 minutes in 19 Ligue 1 matches.

In second place is Leicester City frontman Kelechi Iheanacho who has scored a goal every 145 minutes despite his limited playing opportunities. The former Manchester City kid has netted three goals in 10 Premier League games, logging 434 minutes.

The third most efficient Nigerian striker is none other than Lille’s Victor Osimhen who has reached double figures for goals in his debut season in Ligue 1. The 2015 U-17 World Cup Golden Boot winner has registered 13 goals, one goal every 162 minutes, spanning 25 appearances.
Completing the top five are Union Berlin’s Anthony Ujah with a goal every 299 minutes and Levante loanee Moses Simon who has scored a goal every 400 minutes.

Meanwhile, the Eagles star has rejected the criticism of French Ligue 1, saying it is a league that puts youngsters on the road to stardom. The French topflight has come in for criticism from fans who believed the league lacks the quality of the Premier League.

With PSG winning the six of the last of seven Ligue 1 titles, fans believe the league also lacks the competitive edge associated with the Premier League.

However, Maja rejected such criticism, saying both leagues are unique in their ways. The 21-year-old who joined Bordeaux from Sunderland last January said the Ligue 1 provides youngsters with the opportunity to grow.

”It may not have the same physicality and intensity like the Premier League, but overall, the Ligue 1 is a fantastic league, and I am happy to be playing here with exciting and talented players,” Maja told ojbsports.

Although he admits the French topflight may not have the intensity of the Premier League, Maja insists he’s happy to play in Ligue 1.

”It may not have the same physicality and intensity like the Premier League, but overall, the Ligue 1 is a fantastic league, and I am happy to be playing here with exciting and talented players,” he added.

Maja has scored seven times and provided three assists in 19 appearances for Bordeaux this campaign.

Last Saturday, FC Girondins de Bordeaux were held to a 2-2 result at home by relegation battling Dijon, a game that captures how uncertain their campaign in Ligue 1 has been this term.

Paulo Sousa’s men were rattled by Mounir Chouiar, whose brace (16, 72 brought the French man’s tally in the league to four this the season.

There were some actions for Maja, but more of a cameo as has been in recent games since his injury in December.

Maja had missed four league games prior, either as an unused substitute or been left out of the matchday squad.

The 21- year-old Nigerian international was introduced in the last 10 minutes of the game, but looked far from the quality of the striker who poached four goals in two games.

Maja cut the figure of a man who doesn’t want to be there, seeing now that the opportunities for game time isn’t forthcoming.

When on December 3, Maja smashed in a fine hattrick and an assist in Bordeaux 6-0 drubbing of Nimes to take his goals haul to five in eight matches, making him one of the most decisive Nigerian players in Europe’s top five leagues, little did he know he has caught the attention of Super Eagles manager, Gernot Rohr, after he last appeared for the team in September against Ukraine and his direction have not been looked at since then.

”He was on our list of players to watch, he was already attracting our attention, although he was only playing in League One because our scouts were studying him closely from England,” Rohr told So Foot.

“He seized his chance with the various injuries of his teammates, and his hat-trick is part of the progression he displays.”

“I feel good, I’m very happy to get my first hattrick for Boardeaz and in my career,” the Nigerian international said in a video shared on Twitter by Bordeaux.

“Of course it’s a good night for the team as we picked up three points. We performed very well, so we are going to keep working and prepare for the next game,” Maja said after the game.

Maja, 20, left Sunderland for France in January after rejecting a new deal and has impressed the Chelsea boss who is looking to bolster his attacking options.

Currently, one of the most outstanding strikers in the French League going by his impressive performance so far this season but Bordeaux defender, Laurent Koscielny believes Maja has the potential to achieve greatness if he continues to read the game carefully.

“It’s great for him and his confidence. You can feel that he’s starting to settle in and it’s bearing fruit. He works hard in front of goal, and he was rewarded.

“He still needs to improve in his reading of the game, but he has the right attitude to learn and try to do things well.”

League One strugglers Sunderland sold Maja to Bordeaux for £3.5 million in January; now he could reportedly be heading to the Premier League with Chelsea.

One year after Maja swapped Wearside for Wine Country, the former Sunderland striker could soon be packing his Louis Vuitton and suitcase and preparing to head back across the channel.

But, unfortunately for the Black Cats faithful, one of the most lethal strikers to lead the line at the Stadium of Light in many a year is not heading back to the North East to save Sunderland’s season and Phil Parkinson’s reputation.

While the fallen giants have slipped to 12th in the League One table, Maja is making a name for himself at one of France’s biggest clubs. He’s scored six times for Bordeaux in 2019/20, with a clinical hat-trick in November’s 6-0 thrashing of Nimes an early career highlight.

The former Sunderland forward says he left Sunderland because they could not agree terms on a new deal despite scoring 16 goals for the Black Cats during the first half of the season but was sold to Bordeaux during the January transfer window.

Sunderland offered Maja a contact worth seven times his current salary but he opted to reject the deal. With the 20-year-old’s contract set to expire at the end of the season, the Black Cats opted to cash in to eliminate the risk of losing their star striker on a free transfer.

Eyebrows were raised when Maja joined the Ligue 1 side – particularly given there was a lot of British interest in his services.

“My agent told me that they had shown interest since last year, so it went back further. I made a lot of progress at the beginning of the season, and I think that’s when they decided to take action,” Maja told France Football.

“I had some options in England, Germany, Italy too.

“I felt it was the best opportunity for me to have time in the first team and to progress. It was really a higher step up to me compared to League One.

“We just could not agree on a new deal at Sunderland. It’s that simple. Bordeaux arrived and I wanted to play at a higher level. So I decided to leave.”

“I have always wanted to play abroad to discover a new language, a culture, a way of life.

“I agree it is brave. There are not many young players, especially English, who will play abroad so it was a rather different choice from what we usually see. Now I have to stay focused and do my best to show myself fully.”

He continued: “Ligue 1 is different. The technical level is higher here, we must pay more attention to details. I’m in no hurry, just as I’m not worried. I am still in the process of adaptation. I work every day, I am constantly trying to progress. When my chance comes, I will know how to seize it.”

Nonetheless, despite being under contract at the Nouveau Stade de Bordeaux until 2023, Maja still harbours ambitions of playing in the Premier League.

“It’s obvious. It’s one of the best leagues in the world, with the best teams. I hope that one day I will be able to play but for now, I am in Bordeaux, I want to succeed here, and we will see later.”

Maja, who was born in Lewisham back in 1998 when Gus Poyet, Gianluca Vialli and Roberto di Matteo were still wearing the famous blue shirt, certainly ticks a lot of boxes for this new-look Chelsea side. He is young, homegrown, and prodigiously talented.

Just 12 months after Sunderland sold him for £3.5 million, it seems that Maja is on his way to bigger and far better things.

The bulky forward is a proven finisher, and it remains his biggest asset yet. His ability to run behind the defenders and free up space for his teammates is also a key ingredient in his game, and at only 20, he can get better.

His only shortcoming is perhaps his hold-up play, which he makes up with the large volume of goals.

Josh chose to represent Nigeria even though he was eligible to play for England owing to his parents having lived in the country.

He was however convinced that his future lies with the Super Eagles, and he made his debut for the men in green and white in a friendly against Ukraine.