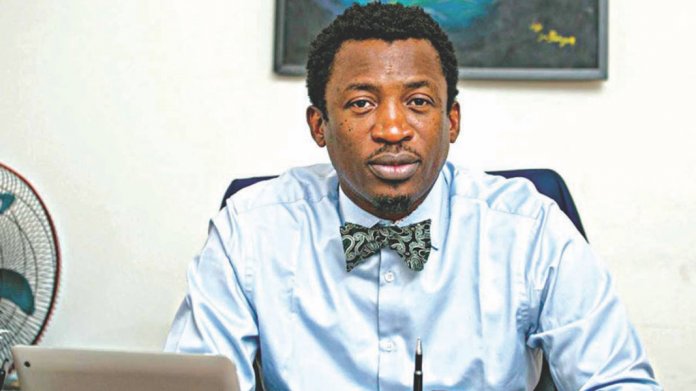 After his first five production credits, investment banker turned theatre practitioner, Joseph Edgar, is back with Aremu, a stage play on the life and times of former Head of State and President of Nigeria, Chief Olusegun Aremu Obasanjo. Ferdinand Ekechukwu reports

Positively disrupting Nigeria’s theatre space with some very strategic productions, investment banker turned theatre practitioner, Joseph Edgar, whose passion and love for theatre and stage plays have led him to produce several remarkable productions in the last few years is set to begin screening of his new play titled, Aremu. The much talked about stage play, which is coming on his Duke of Shomolu Productions, depicts the life and times of Obasanjo, one of the country’s most celebrated and influential former presidents.

The Play, written by erudite Professor Ahmed Yerima, will take the audience from the iconic Obasanjo’s birth, through the struggles of his peasant upbringing, to the epoch rendering of his later life, capturing the highs and lows of the life of this great statesman. Aremu tells the story of Nigeria but from the life of Chief Obasanjo who some say remains arguably one of the most influential Nigerians alive. Aremu is expected to open with a command performance at the Obasanjo Presidential Library, Abeokuta on March 4.

Director, William Benson will be returning after the success of Oba Esugbayi, to tell the story of Aremu, using some compelling songs and dances guaranteed to leave the audience in awe of the story. Obasanjo has given his blessing to the project, which is expected to premiere in Abeokuta during festivities to mark his birthday in March, and from there, begin its three-year run through three continents.

Edgar had earlier explained that Aremu will tell the story of one of the greatest living Nigerians very vividly. “It was easy to conceive because as a student of Political Science, I have always been enamoured by his life. Very few people have the colour and characterisation that would make a good story of Chief Obasanjo. Watch out for this play as it would truly redefine cultural story telling

“The story of Obasanjo must be heard and that’s because it resonates amongst all classes of Nigerians and indeed Africans. From his peasant birth, through the sufferings of a prisoner of conscience, up to the apogee of power and influence, you will see the story of resilience, courage, principled leadership values that seem lost in today’s Nigeria.

“For me, Aremu will give us a string to reconnect to our core as Nigerians, as we struggle to regain our depth as a proud people. One million people are expected to see this production worldwide. We are playing in four Nigerian cities and we are building a production suite of some of the brightest and hugely talented Nigerians to tell this story. What excites me? It’s the gradual progression from vision through the various stages to the location. It just does it for me.”

According to Edgar, a lot of theatre buffs and audiences will see Aremu globally and the story will not only celebrate this very colourful and influential statesman, it will also serve to strengthen some of the values that he has spent almost all of his life propagating. The project parades a brilliant technical team including the Deputy Chief Coordinator of the Olusegun Obasanjo Presidential Library, Ayo Aderinwale, who will double as the co-executive producer, while Bikiya Graham Douglas and Yemi Shodimu will be equally playing major roles in the production.

Edgar’s vision of stage plays in Nigeria is to sternly move from the periphery of entertainment into the very forefront of popular culture where it truly belongs: “My challenges are not different from that faced by any serious entrepreneur in Nigeria. But we are surpassing them and we will continue to deliver on our promises to the markets. Let’s just say that the space will no longer be the same in the next five years.”

Aremu will continue showing through the month of April on 10, 11, 12, 13 and 31st May. Part of the screening also extends to the first three Sundays in June.