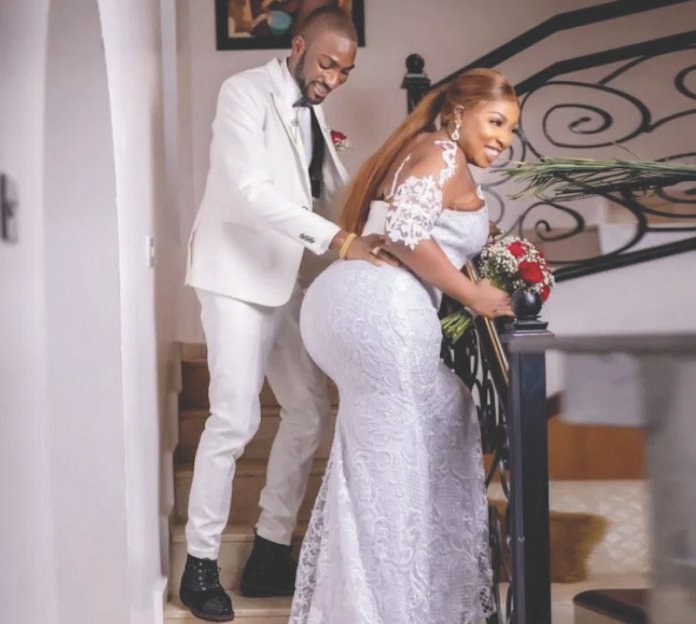 Nollywood actress, Anita Joseph, has tied the knot with her man, comedian/actor, Michael Fisayo (MC Fish). It seems this actress and mother of one might have found lasting love at long last, with the manner she has been going about celebrating. Well, only time will tell, as not many would want to cast their hopes on a lifetime romance, given Anita’s controversial lifestyle, writes Ferdinand Ekechukwu

In this part of the world, where celebrity marriages have become a burning issue and is perceived to be jinxed, of what purpose would it be to be celebrating one? Most of them are consummated on the altar of love, and love as it is, seems to elude a number of them, owing to “irreconcilable differences” and the nature of their jobs. However, a couple of them have been able to join the lucky ones who find sustainable love and settle down.

On Friday February 14, 2020, it was the turn of feisty Nollywood actress, Anita Joseph, as she tied the knot with comedian, Michael Fisayo, in Lagos. The actress and her man, MC Fish, as he is popularly known, tied the knot on that special day which was Valentine’s Day, a day to celebrate love. To Anita, “We decided to get legally married on Valentine’s Day because we are in love with love. My husband gave me the liberty to choose the date because it is generally believed that the wedding is for the woman.”

Prior to exchanging their wedding vows, while celebrating her on her birthday on January 4, 2020, the lover boy, wrote on Instagram; “Happy birthday Anita A lot of people think they knew but they don’t, you are misunderstood, misquoted and sometimes taken for granted but these people can’t do half of what you do in a day. You’re a hardworking mother, business owner and actor. You’re rare gem, a star that will always shine, who knows her roots and does her job diligently. Sometimes, the way you selflessly put others before you never ceases to amaze me. You are a treasure and anyone who’s lucky to have you as a friend knows this. So I say happy birthday to you my sunshine. I love you so much. May God bless you and grant you all your heart desires IJN. Amen.”

Anita responded saying “Awwww my love, amen to your prayers, and I love you deep my king.” The show of affection did not end there. Her man had something up his sleeves. More surprises were to follow on that day as she turned 35. Her man surprised her with a live band and cakes while the actress was out and about.

Still on the wedding, after tying the knot, Anita made sure to share several loved up photos with her husband to the joy of her fans online. The case is not any different even now that they have been married for almost two weeks. The film star even posted more photos from their wedding on Instagram as she spoke on when they met and how their relationship has been since then.

The mother of one may have found lasting love at long last, only time will tell. However for months now, ever since they met, and to the time leading up to their union, hardly a day passes without the curvaceous actress hinting or posting pictures or comments relating to their relationship as she flaunts the man, MC Fish, on her social media space. Lanky Michael Fisayo is a hype man, an actor and a host.

For those who have been following the escapades of the Anambra State indigene on social media, her wedding to MC Fish is seen as a joke taken too far. But for Anita, her smiles have not ceased since June 8, 2017, when she met her man. She explained further that they had lived a blissful life together and almost forgot that they were not married. The actress wrote: “This smile has never ceased since 8th June 2017, and it will remain that way forever because our union is Strong oh! Our meeting was divine and magical… and from that moment our story began.

“At a point, we forgot we were not even married. E too sweet us so we just say make we kuku do am for ndi umu nna na umunne. @realmcfish Jehovah will shock you with blessings my husband. He will bless your bread and water. You will hype all over the world. Your microphone is blessed, your voice is sanctified, and you’re amazing. Your talent will take you to places and doors of favour s will be opened unto you pappy.”

On his part, Fisayo had earlier in a chat revealed why he loves Anita and why he is making her his wife: “Yes, the only special woman in my life is Anita Joseph, she is a Nollywood actress.” When asked if he’s not afraid to settle down with an actress, the fast rising comedian said: “No, I’m not scared at all. I believe it’s not about what the person does; it’s who the person is. My woman fits all the criteria.

“I understand it’s her job, so whenever she is acting, or even doing lovemaking scene thing, I will just sit back and watch my baby girl do her thing because I know she is acting. It’s not the real thing, it’s her job, we are both entertainers and we have understanding. Anytime I watch her movies and she does the sexy things, I would say ‘babe you need to do that for me too, we should try it tonight’ so it’s usually like that, that is how I’ve been able to cope, and we are both happy.”

The controversial screen diva, who never shies away from strutting her massive backside, for sure would miss her freedom and that begs the question now the status quo has changed… As much as she appears happy to be off the single ladies market, she would miss uploading videos of herself showing off her voluptuous boobs in a bathtub. One of the things she would miss most about being single is her twerking videos. She confessed, “I’ll miss my twerking videos. My husband does not like them. He once told me, ‘Your body is massive and you’re the most beautiful girl that I’ve ever seen. Please don’t twerk anymore. However, I twerk in the room these days.”