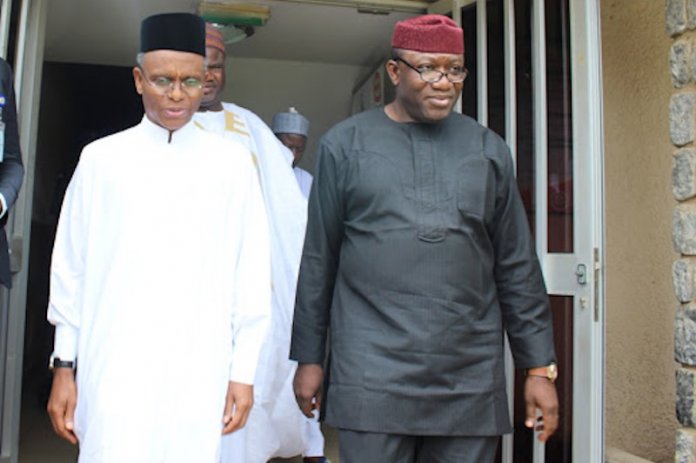 Christopher Isiguzo in Enugu, Segun James in Lagos and John Shiklam in Kaduna

Political analysts yesterday forecast that the duo of Ekiti State Governor, Dr. Kayode Fayemi and his Kaduna State counterpart, Mallam Nasir el-Rufai, may pair for the presidential ticket of the All Progressives Congress (APC) in the 2023 election season.

According to them, the duo looked good for the ticket because among those being rumoured to be nursing presidential ambition, they paraded the most outstanding credentials and currently enjoy support from President Muhammadu Buhari and members of his kitchen cabinet.

Already, there are subterranean moves in the ruling party to see that the APC fields one of its governors to succeed Buhari whose tenure expires in 2023.

The analysts, who spoke to THISDAY against the backdrop of the recent advocacy by el-Rufai for power to shift to the South after Buhari’s tenure, confided in THISDAY that of all the governors in the South-west, which is the only zone in the southern part of the country where APC commands huge support, only Fayemi has the heft to give APC National Leader, Senator Bola Tinubu, who is said to be nursing a presidential dream, a run for the office.

They added that the ambition of the duo threatens Tinubu’s presidential ambition, and likely to upstage him from the race.
El-Rufai had recently said the presidency should return to the South after Buhari’s tenure in conformity with the zonal arrangement embraced by the major political parties.

He did not specify which of the three geopolitical zones in the South that should take the presidency in 2023 but added that it would be unjustified for the North to seek to retain the presidency after Buhari’s tenure.

Fayemi, whose second term tenure as Ekiti governor will end in October 2022, about six months ahead of Buhari’s, is currently the chairman of the influential Nigerian Governors’ Forum (NGF), and commands respect among his colleagues across party lines.
Besides, being in the same party with el-Rufai, both of them are close and the Kaduna governor was one of those who rallied support for him during the NGF chairmanship election, which Fayemi won unopposed.

The analysts’ prediction came just as the apex Igbo socio-cultural organisation, Ohanaeze Ndigbo and an elder statesman and a founding member of the Arewa Consultative Forum (ACF), Alhaji Tanko Yakasai, have lauded the call by el-Rufai that the South should produce Buhari’s successor in 2023.

However, the leader of the pan-Yoruba socio-cultural organisation, Afenifere, Chief Ayo Adebanjo, dismissed as diversionary, the governor’s statement, saying that the country should be restructured first before the issue of power rotation is discussed.

But the Arewa Consultative Forum (ACF) described the governor’s opinion as personal, adding that zoning and power rotation are not binding on any political party.

He told THISDAY yesterday that he had been an apostle of power shift and rotation among all sections of the country.
He said power rotation would give every section of the country a sense of belonging.
“I have said before that it will be wrong for the North to aspire to produce the president after Buhari because the country belongs to all of us.
“I happened to be a member of the National Executive Committee of the defunct National Party of Nigeria (NPN), which introduced zoning and rotation and there was a reason for that. “The reason is that power should be rotating between the North and the South so that every section of the country is given a sense of belonging.

“So, the rotation and zoning should go together so that every segment of the Nigerian society would be given the opportunity to produce the president as the time goes on.”
But Adebanjo faulted el-Rufai, describing his advocacy as a diversionary plot.

“With what is happening, I don’t trust any election that will happen under Buhari. Let’s restructure the country, then we can decide where the presidency should go.
“Why are they talking about presidency now when they know where it will go? He holds all the powers and he is deceiving the people. Let’s go back to where we are at independence; what is the problem with that?”

He stated that both the president and his political party, the All Progressives Congress (APC), are not honest with Nigerians on the issue, adding that for peace to reign in the country, the nation must be restructured.

The ACF, however, said the governor was expressing a mere opinion.
The Secretary of ACF, Mr. Anthony Sani, told THISDAY in Kaduna that unless there is a consensus by Nigerians or a law is enacted to make it binding on political parties to adopt zoning and power rotation, it will be difficult for the parties to implement it.

“I have made it clear to the media that in the absence of national consensus or law on politics of identity symbolised by zoning and rotation of the position of the president that is binding on political parties, which are the organs to present candidates for elections in our nascent multiparty democracy, any position by anybody on which zone to produce the president comes 2023 is foolhardy because it has no traction.

“Governor el-Rufai’s suggestion on this issue is not more than his personal opinion, which is not binding on all our political parties.

“Whether his suggestion is fair or not is not important because it has no backing of force of law or of national consensus. This is because democracy is a practice whereby majority holds sway. The position taken by the majority is deemed to be fair,” Sani explained.