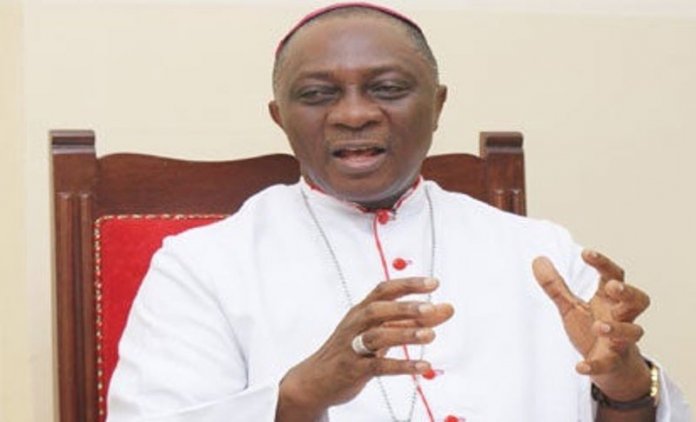 The Archbishop of the Metropolititan See of Lagos, His Grace, Alfred Adewale Martins has appealed to parents to create more time for, and pass on the values they have learnt to their children, saying that the move will help in making the society a better place.

He also stressed the need for schools to up their games in ensuring that the children become responsible citizens as far as values and integrity are concerned.

Martins said this during an afternoon with the Archbishop on youth development in Lagos, which provided an opportunity for a sensitisation on plans by the Catholic Church to establish St. Joseph the Worker Technical Institute, where practical skills would be acquired by youths.

“Parents need to create more time for their children, the schools are also supposed to be incubators for turning out good citizens, should also up their games as far as values of integrity and honesty are concerned so that all the cheating and dishonesty that you find among teachers and students will be a thing of the past.”

Emphasising on the institute which will commence academic activities by September this year, Martins said: “Our church has always taken it as a responsibility to educate the young. We take the education of the youths as very vital because the mission of Christ is to go to the ends of the earth to proclaim the good news and the proclamation of the good news involves educating people in values. The vision that is being exposed today will come to realisation that all of us will be glad.”
He said the institute will provide skills, education and values, as well as the needed manpower.

“I have always had this feeling that we need to train more people in a facility that is able to give them skills that will impact the society, and in doing that, they will also have the values that the society will learn from and imbibe. We all know how difficult it is to get people to do tiling and electrical works of the built industry.

“We know how we had to go far away to other countries in order to get them, whereas it is not impossible to get such people in our country to do it. To do it along with the moral values that are necessary, we will ensure that when the work is done, they are done with integrity in such a way that everybody will be satisfied.”

On the stigma usually associated with being a craftsman, the archbishop advised people to recognise that there is dignity in every level of labour, adding, “apart from that, people should also take pride in the work that they are doing, a bricklayer for instance considers himself as lower than the architect, whereas the job of the architect is different from that of the bricklayer, so we need to give each professional the due regards.

“Let people recognise that there are possibilities of earning good money from these so called lower jobs. People who are carrying around certificates are not getting jobs, not to talk of those who are really doing the jobs.”

In his presentation, the Secretary of the Project Implementation Committee, Chief Olawumi Gasper recalled how the archbishop had constituted the committee and charged it with the responsibility of drawing up a document which provides a guide for the commencement of the institute, adding that the project will among other objectives, equip youths with certification that will make them employable globally.

While calling for support for the successful take-off of the institute, the Chairman of the occasion, Mr. Vincent Otiono said if the country is able to take unemployed youths off the streets, the sky will not be the limit.