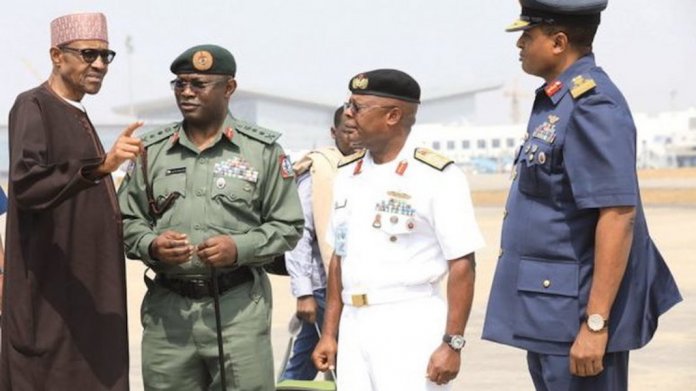 Nigeria’s worse kept secret over the past four years is that the security chiefs have been factionalised, fractionised and different sections therein have been tied to feuding groups seeking dominance within the Buhari administration. I recall being at the security summit organised by the Eighth Senate when the former head of the Department for State Services (DSS), Lawal Daura lamented that it would be difficult to improve national security as long as feuding continues to define the relationship between the security chiefs, some of whom were not even on talking terms. In other words, throughout the life of the Buhari administration, there has been no cohesion in the security team and that has been a factor in making it difficult to address the numerous security challenges facing the country.

I suspect that at the root of the crisis is the lack of a clear hierarchy between the security chiefs. At the top, the commander-in-chief is in charge. Below him, I wonder what the roles of the national security adviser, minister of defence, chief of defence staff and chief of army staff are in terms of the pecking order. It’s a complicated situation, as the chief of army staff, for example, should be the lowest on the above list but is he so in practice? After all he is the principal actor fighting the war. How does he relate to the other service chiefs? I will avoid going into the rumours circulating but suffice it to say the question of hierarchy and the chain of command is important in building cohesion.

Under the Jonathan administration, there was a clear power centre through which the commander-in-chief was issuing orders and passing on resources. It was Colonel Sambo Dasuki (rtd.), the then national security adviser, who it turned out, was also the nerve centre of corruption in that administration, as we were to find out when he was charged to court in 2015. Maybe the president grew a dislike of the office because his own NSA, Major General Babagana Mungono, does not appear to outsiders like me to have the vast powers associated with Colonel Dasuki. In fact, he appears to be quite marginal and isolated in the scheme of things and is seldom seen hovering around the president. It will be recalled that in 2016, General Monguno was locked in a fierce rift with Lawal Daura, the former director-general of DSS. Technically, Lawal Daura was a subordinate to Monguno, in his capacity as the overall coordinator of national security, yet for several years, the duo rarely interacted with one another. The battle lasted until Mr. Daura was dismissed from office in August 2018, sources said. It was clear that, at that time, the powerful one in the first phase of the administration was indeed Lawal Daura, until he crossed a red line and lost the job. As nature abhors a vacuum, someone had to step in to provide leadership. It was at this level that the bombshell emerged this week that the power centre had moved from the NSA to the DG of DSS and finally to the civilian chief of staff to the president, Abba Kyari.

Moving forward, the commander-in-chief needs to stop the drift into chaos. First, he needs to urgently address the matter of hierarchy, chain of command and reporting/pecking order within the security sector. His security chiefs must work in harmony and synergy. This means he must end the factional feuds in the security sector, even if it means removing those he considers to be of low performance and siding with the high-performance actors. If this is too complicated, he might want to simply support the faction he likes and get rid of the one he likes less. Secondly, security institutions should be respected and allowed to function normally. Thirdly, the welfare of our troops is very important and authorities should ensure that they are well equipped and they receive their full complement of allowances. Finally, there is great fear in the country that security agencies have themselves entered into a self-serving war economy, in which the primitive accumulation of wealth has overtaken commitment to ending the war. If this is not reversed, we are doomed. It is therefore urgent that security related procurement should be formalised and cleaned-up.