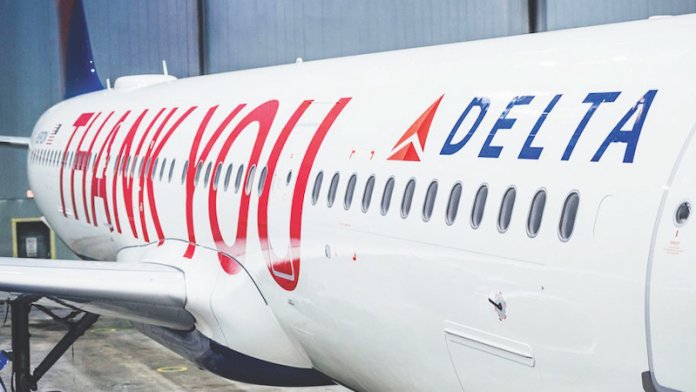 Delta has unveiled a special livery on one of its A321 aircraft, depicting the names of all 90,000 employees. The livery features the words ‘Thank You’ in red letters, inside which are the 90,000 names, as well as the words “Dedicated to the world’s best employees and customers” depicted under the cockpit windows.

The special livery coincides with Delta’s $1.6 billion profit sharing payout to employees, which it says is a record for a US-based company.

The livery took over a week to complete at the Delta Tech Ops print shop and hangar in Atlanta, and used over 48 custom decal panels. Commenting on the news Delta’s CEO Ed Bastian said: “Delta would be nothing without our 90,000 people worldwide. They deserve all the credit for our success, and we are proud to recognize their extraordinary work with a $1.6 billion payout – marking the sixth year in a row that Delta’s profit sharing has exceeded $1 billion.”

Last week Delta also announced a ten-year, $1 billion commitment to mitigate all emissions from its global business, starting in March.