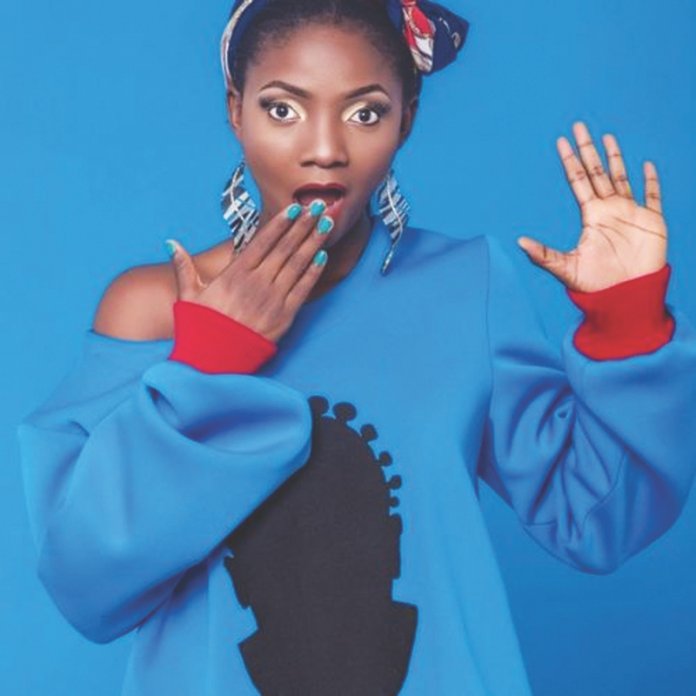 Nigerian soul and afro pop singer Simisola Ogunleye (Simi) had a blast performing live at the Siaka Stevens Stadium in Freetown Sierra Leone during the Valentine’s Day festivities. It was her first time experience performing in the Sierra Leone and the songstress brought her all to the stage in appreciation of the rousing reception she received on arrival in the West African country. The capital city was already bursting with the news of her arrival.

Stunning with her baby bump, the music star and married mum-to-be, slayed effortlessly all through the concert in Sierra Leone. Video footages showed that the love she received from Sierra Leoneans was overwhelming! She was given a welcome befitting of a royal. Nigeria being the superstar entertainment nation in Africa makes such reception understandable. Sharing a video on social media of how her fans in the country gathered just to get a glimpse of her face on her arrival, the singer said the experience was dreamlike.

In the video, the fans upon being informed of the singer’s arrival took to the streets to gather around her car while her songs played in the background. According to her, the entire experience was surreal and was embarrassed to post the video on the gram. Simi revealed that she was unable to process the kind of attention and wasn’t expecting the kind of love they showed her which was quite astounding.

She wrote: “So surreal. I’m actually embarrassed to post this video for a couple reasons. I don’t know how to process this kind of attention. Also, I didn’t expect anything close to this level of love. I’m grateful for it. I thank God for it. Thank you Sierra Leone. I don’t take it for granted come out tomorrow. Let’s have a great time my Salone people ????????”

And then her epic performance on stage! Her time was complemented by a large audience who thronged the arena. She was presented by Zed Zee Multimedia, Cool & Cozie, and SoundTech International, organisers of the two day Valentine’s special Music meets Runway Festival. She performed at the National Stadium in Freetown on the 14th of February and at the Bintumani Conference Center the following day. Siaka Stevens Stadium where the songstress performed is the national stadium of Sierra Leone located in the capital city of Freetown and is the largest and main stadium in the country with a 45,000 capacity.

Her Siaka Stadium performance was impressively packed as she thrilled the crowd non-stop. “Are you ready to sing to some good music tonight?” She had asked the massive turn out midway into her set before launching into her other songs. The crowd didn’t disappoint. They sang along words for words. Simi has loads of hits songs and a huge fan base worldwide, mostly ladies. Other Sierra Leonean musicians like K. Man, Markmuday, Zainab Sheriff, LXG, and Arkman performed alongside the Nigerian export while models from different fashion houses showcased their beauty and glamour.

The music meet runway is a show that tries to connect the music and fashion industry in Sierra Leone industries and this is the second edition of the event. It’s been a year after her much talked about wedding with Adekunle Gold, and the celebrity couple, are expecting their first child. The soulful singer, Simi, recently performed at the German embassy after which she posted pictures with a cryptic caption that confirmed speculations of her pregnancy.

The sonorous singer, who was excited to have performed for the German ambassador, took to her Instagram page to share her delight.

The 31-year-old shared a series of posts about the event, one of which she captioned: “When you suck belle, but belle don’t suck you back, can two work together except they agree?” Along with the vague caption were pictures showing her protruding belly while she was on stage performing.

The pictures seemed to have confirmed previous gist about the singer being pregnant. Simi has done everything within her power to keep her private life from the public since getting married to her long-time lover. But it seems there’s no more need to hide what is now a glaring baby bump.