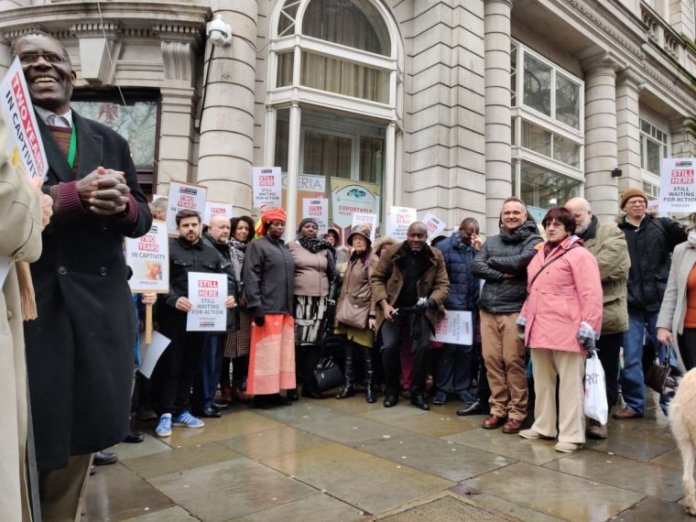 As part of the international campaign to put pressure on the federal government to negotiate the release of Leah Sharibu, a group of Nigerians, include Leah Sharibu’s mother have staged a protest at the premises of the Nigerian High Commission in the United Kingdom, calling on the British government to intensify pressure on President Muhammadu Buhari to secure the release of the remaining Dapchi school girl.

A petition with 12,132 signatures was also submitted to a member of the UK Parliament, Baroness Caroline Cox, by Leah’s mother, Mrs. Rebecca Sharibu, calling on the federal government to secure her daughter’s freedom.

The spokesperson for the Sharibu family and senior lecturer in the Department of Political Science at the University of Jos, Dr. Gloria Samdi Puldu, who released the details of the protest, said the protesters were led by the Executive Director of International Organisations for Peace and Social Justice, Pastor Ayo Adedoyin.

According to her, the protesters carried placards with different inscriptions such as ‘Two years in captivity, negotiate her release now’, ‘held because of her faith, Free Leah’, and ‘Still here, still waiting for action’.

She said the protest was part of the activities to commemorate the two years of the abduction of Leah Sharibu by Boko Haram insurgents.

Puldu, who is the Executive Director of Leah Foundation, said Rebecca Sharibu pleaded with the UK authorities to “put pressure on President Buhari who was visiting their country to fulfill the promise he made to her to bring home Leah and all others in captivity.”

Puldu said: “February 19 marks two years of the abduction of Dapchi girls and Leah Sharibu the only remaining girl in captivity turns two years in captivity. Rebecca Sharibu is with me at present in the United Kingdom to appeal to the UK Prime Minister, Boris Johnson, to put pressure on President Muhammadu Buhari to fulfil the various promises that he had made to secure Leah’s release on several occasions.

“Rebecca met with Baroness Caroline Cox on February 18 who assured her that she will take her message to UK Parliament. Cox explained that she had been on the Nigerian case for quite some time.

“Rebecca Sharibu attended a number of activities including a prayer vigil organised by Pastor Adedoyin with Leah Foundation, Christian Solidarity Worldwide, and Open Doors both in the UK on February 19, marking two years of her daughter’s abduction.

“At the prayer vigil in front of the premises of the Nigerian High Commission UK, she was with a petition with 12, 132 signatures calling on the Nigerian government to take action to secure Leah’s release.

“The signatures gathered by the CSW U.K. were delivered by Rebecca Sharibu and accompanied by myself, CSW Chief Executive, Mervyn Thomas, and Pastor Adedoyin with other protesters in attendance. Rebecca, in tears, continued her appeal that Leah has spent two years in captivity and the family does not know her situation or condition.”

“Rebecca further stated that they do not have a proof to show that Leah is alive or that the rumour of Leah giving birth is true or not since they only see reports in the (social) media only.”