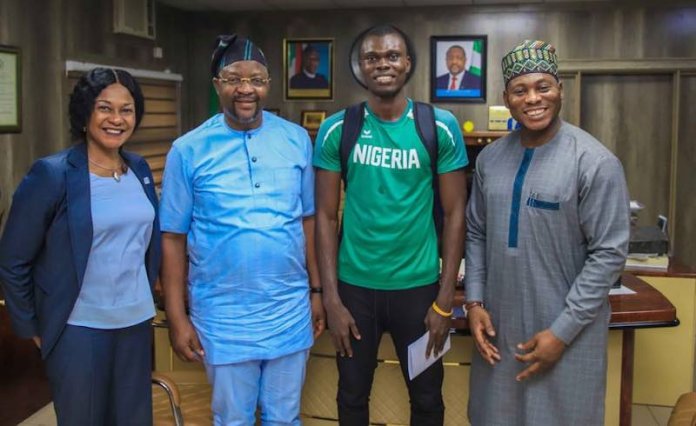 Fortune has smiled on young Nigerian Junior Olympic Triple Jump athlete, Ineh Oritsemeyiwa, with the Minister of Youth and Sports, Mr Sunday Dare, providing him ticket to pursue further study side by side with sports through scholarship in the United States of America.

The Minister facilitated his trip after two failed efforts at securing visa and ticket due to financial constraints.

Speaking when the athlete paid the Minister a thank you and farewell visit in his office in Abuja, Dare urged Oritsemeyiwa to be a good ambassador of Nigeria by staying focused as he prepares for the Olympics in Tokyo.

Oritsemeyiwa, born on 17th March 2001, represented Nigeria in triple and long jump at the Youths Olympics in Argentina in 2018 where he won silver.

He competed at the Africa Region ll games in Ghana where he won a gold medal in triple jump event for boys and a silver medal in the long jump.

Also in 2018, he competed at the Africa Senior Championship in Athletics Asaba, Delta State, Nigeria where he finished 7th overall with a distance of 16:09m This was due to the fact that he took just one jump because he had pains on his ankles.

Latter in the same year, he qualified for the Youth Olympics Games in Buenos Aires, Argentina where he clinched a silver medal in the triple jump with a distance of 16:34m to further extend the Africa Youth record .

Oritsemeyiwa jets out to the United States of America to continue his sports and academics at the William Carey University, Hattiesburg, Mississippi .

He is one of the athletes Nigeria will be relying on for medal in Tokyo.

The trip would grant him further exposure to state of the art facilities that would enhance his chances of winning a medal.