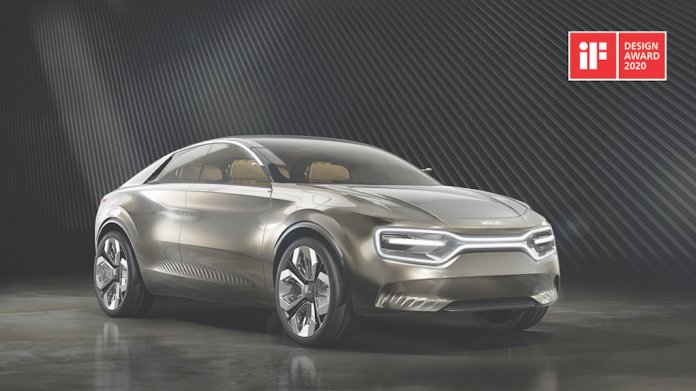 The Kia XCeed urban crossover and the ‘Imagine by Kia’ concept have been awarded with prestigious 2020 iF Design Awards. Both vehicles demonstrate Kia Motors Corporation’s design-led approach to product development, and the brand’s evolution in an age of electrified mobility.

Winning a prize in the ‘Professional Concept’ category, the ‘Imagine by Kia’ concept is a visual embodiment of Kia’s desire to champion and popularize exciting electric cars. The XCeed was awarded in the ‘Product’ category, following the successful introduction of the new urban crossover to the European new car market in 2019.

This double achievement once again illustrates the Korean manufacturer’s unrivalled strength in automotive design. Kia won its first iF Award in 2010, and has created at least one prize-winning vehicle design every single year since. A brace of prizes in 2020 brings Kia’s total number of iF Design Awards to 20.

‘Professional Concept’ prize for the Imagine by Kia concept

The ‘Imagine by Kia’ concept is a pure electric four-door passenger car which draws together elements of a sleek and athletic family sedan, a muscular sports utility vehicle, and a versatile, spacious crossover. Intentionally designed not to sit within the car industry’s predefined vehicle categories, it is also defined by its next-generation, zero-emissions powertrain: a low-mounted, induction-charged battery pack that powers electric motors on each axle. The ‘Imagine by Kia’ concept was revealed at the 2019 Geneva International Motor Show.

“It hints at something familiar, but is something entirely new,” said Gregory Guillaume, Vice President of Design for Kia Motors Europe, at the launch of the car. “I think of it as a category-buster, and a disruptor – it’s familiar and understood but at the same time progressive and new.”

In 2020, Kia is turning even more of its focus away from internal combustion engine vehicles towards those powered by zero-emissions electric power. Designed as a standard bearer for 21st Century motoring, the ‘Imagine by Kia’ reinterprets and evolves many of the brand’s established design motifs, in a package designed to excite drivers.

Winning the iF ‘Product’ design award, the Kia XCeed is a new urban crossover utility vehicle (CUV) which combines compact SUV practicality with the sporty packaging and engaging handling of a hatchback. It addresses the growing desire among European drivers for cars which offer more emotion and dynamism than an SUV, both in terms of the way they look and drive.

Designed as a sporty alternative to a traditional SUV, the new CUV nevertheless offers comparable levels of space for occupants and luggage. The car engages drivers with its sporty handling and comfortable, assured ride, while providing a more commanding view of the road ahead than a conventional hatchback.

The car has been designed exclusively for European customers at Kia’s European design studio in Frankfurt, Germany. Offering something refreshing and different for European drivers, the Kia XCeed went on-sale in Europe in the second half of 2019. The first electrified variant of the car will go on-sale in the first half of 2020 with the arrival of the XCeed Plug-in Hybrid.

The XCeed’s trophy in the ‘Product’ category means all four members of the new Ceed model family have now received iF Awards. Kia was awarded with a hat-trick of iF Awards in 2019 for the five-door Ceed hatchback, Ceed Sportswagon, and ProCeed five-door shooting brake.

The iF Design Award, established in 1953, is one of the most prestigious design awards globally, organised each year by iF International Forum Design GmbH in Hanover: the oldest independent design institution in the world.

In 2020, companies from 56 countries around the world participated in Awards, making a combined total of 7,298 product submissions – each judged by an international jury of 78 design experts.

The iF Design Award covers seven categories: Product, Communication, Packaging, Architecture, Interior Architecture, Service Design, and Professional Concept. Winners will be formally recognized at the ‘iF Design Exhibition’ at the Friedrichstadt-Palast in Berlin, UNESCO City of Design on 4 May 2020. Award-winning entrants to the awards will also be exhibited at Berlin’s Cafe Moskau from 2-10 May.