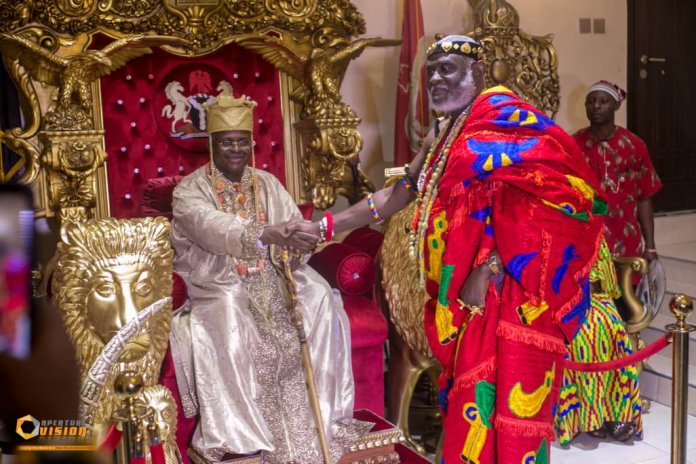 When HRH Appolus Chu, the Egbere Emere Okori Eleme, clocked 50 recently, Mary Nnah writes that it was a gathering of traditional rulers across the nation and West Africa, captains of industry, and creme de creme of the society, including President Muhammadu Buhari, who commended him for his keen interest in restoring peace and unity internally and externally

The turnout was huge and colourful. The ceremony, best described as a showstopper, had various cultural displays to tickle the fancy of the mammoth crowd that graced the occasion. There were more than enough varieties of cuisines to feast on. It was the 50th birthday celebration of His Royal Highness Appolus Chu, the Egbere Emere Okori Eleme, which held recently in Eleme, Rivers State.

Personalities, most especially traditional rulers from across Nigeria and West Africa at large, were present to honour a man whose efforts in uniting the nation and Africa, is second to none. Consequently, the encomiums poured in torrents. Regarded as one of Africa’s foremost kings of this era, a lot was said about HRH Appolus Chu’s enormous contribution to peace, development and unity within the continent.

President Muhammadu Buhari, traditional rulers from Nigeria and other parts of West Africa, applauded the great philanthropist and peace ambassador while also urging him to sustain the strides he has taken so far in his pursuit of peace advocacy and bridge building across the nation and the continent.

It is worth mentioning that in last the couple of years, Chu has travelled around kingdoms across Africa with the message that despite their cultural diversities, unity amongst African traditional institutions will ensure a secure and economically vibrant continent.
He has all along expressed the belief that fostering the spirit of brotherhood amongst African societies is a guarantee for the development of a united and peaceful continent.

This message and his good relationship with some African traditional rulers, was expressed at his 50th birthday in Eleme, Rivers State, even as the presidency was represented as the event.

Buhari who felicitated with Chu during the epoch-making event, was represented by the presidential spokesperson, Garba Shehu, the Senior Special Assistant, Media and Publicity to the president.

Presenting the President’s goodwill message, Mr. Shehu noted: “Your majesty, the president has written a letter congratulating you, considering two important things about you: one, the love you have for the nation and your role in national integration and this is amply stated by the colours of the people in this hall – coming from all parts of the country and in fact beyond the boundaries of Nigeria.

“The second consideration by the president is the love you have for him. He knows about it and he appreciates it. It is my privilege to present the president’s message, which in any case has been conveyed in the media in the last few days.’’

Also speaking at the occasion, the Deputy Speaker House of Representatives, Ahmed Idris described Chu as a rare personality and a blessing to Nigeria and Africa, noting, “Your Royal Highness, the gathering here speaks for itself and from the volume of statements from the presidency speech, through prayer offered, have said it all and I do not think I have much word to add.

“We want to thank you for what you have been doing for the nation and I wish you good health, long life, prosperity, so that you would continue to deliver more. And I say these are the kind of people we require in this nation.”

“I make a promise to you and to every Nigerian, that I will always support people like you who are willing to allow us exist peacefully; people who mean well for the country, devoid of sentiment for religion, sentiment of tribe and geo-political zones.
“Thank you and we thank God for what you are. Our prayer is that God should elevate you. He should add more values for you and continue to allow you do the great things you are doing for this country”.

Also the Women Affairs Minister, Dame Pauline Tallen could not hide her excitement at the magnitude of the gathering at the occasion.
“Today, Your Royal Highness has gathered all Nigerians across the nation to celebrate you and your dear wife. We are happy to be associated with you. I had to defer all other assignments to honour this great Nigerian. He is not just a King in Eleme.

“As you have heard from his biography, he came from a humble home but God exalted him. And up till today, he has taught everyone that knows him humility. We learn a lot from you because of your humility and that is what gladdens God”, Tallen said.

Sometime in 2018, Chu took his message to some countries in West Africa, seeking synergy among traditional rulers to pursue ways in which Africans can unite and make the continent a better place for generations to come.

The highly significant event brought representatives from countries within Africa under the same roof. In attendance were the President of the Greater Accra Regional House of Chiefs and Paramount Chief, Osu Kingdom, Accra, Ghana, Nii Okwei Kinka Dowuona VI and HRH Muhmandou Bojang, Sukuta Kombo Kingdom, The Gambia, among other first class traditional rulers in Nigeria as well as other guests.

For the peace ambassador, Chu, their presence at the landmark celebration, was enough encouragement for him to continue with his peace and unity campaign.

“I had to leave Ghana and come all the way to Nigeria because King Appolus Chu is a very good friend. This is an opportunity to come and see first-hand what he is doing and I am very much impressed that everything he has been talking about, he has walked it and what he is doing is what each and every traditional ruler must do.”

HRH Bojang on his part, recalled when Chu came all the way to the Gambia in order to seek peace and tranquility, and stability within West Africa.

“I am glad that you have taken it upon yourself to ensure that peace and stability is achieved within West Africa. I congratulate you today on your 50 years anniversary. May God give you long life, prosperity and good health”, he said, while describing Chu as a man who wants to see peace and tranquility established in Africa as a whole.
In his response, Chu, whose wife, Grace, was steadily by his side all through the ceremony, expressed gratitude to President Buhari and promised to do more in the coming years.

“Mr President is a responsible father and leader, who knows the value of appreciation. It gladdens my heart that he has taken note of my contribution towards achieving peace in the country.

“I believe that what Mr. President has done, not just to me, but to other Nigerians, is to encourage us to work harder. I think Mr. President is a very clever person for doing this. With such honour, he has brought to my sub-consciousness the need for me to always be mindful of my actions and to know that people are watching me”, Chu noted.

Promising to do more, HRH Appolus Chu said, “I promise to do more but first I need every one’s prayers for God to give me the grace; and to have good health and long life. Without good health, I can’t do much. And
“I am hoping to expand my philanthropic gesture to many other areas around the country so as to reach out to more people. I pray to be still active even when I am 80 and 90 years of age so that I will continue to impact on my community and my country for a very long time.’’

HRH Appolus Chu looks forward to a united Africa where all can live in peace; believing that his desire for a united traditional institution in Africa can be achieved if more traditional rulers can be united despite cultural diversity.