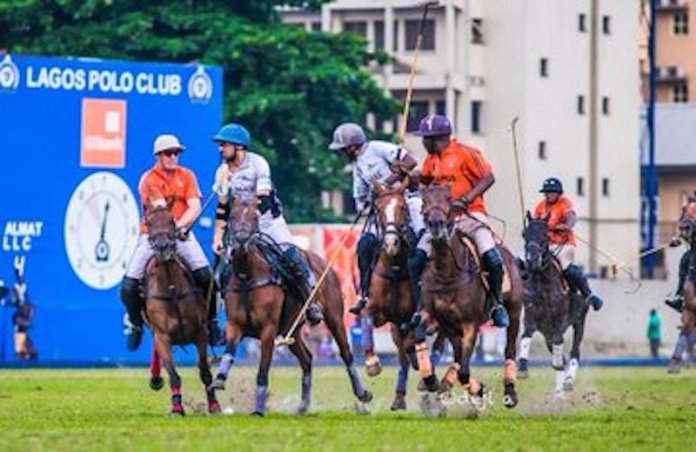 The final week of the 2020 GTBank Lagos International Polo Tournament galloped off on a blistering note yesterday with Lagos Dattaku claiming a 7 ½ – 6 win over Lagos GDF in the Low Cup.

Kaduna Trappco also out galloped Lagos Al-Dusar 6 – 5 ½ in another Low Cup game with Aliyu Tijani’s six-touch 200 yards solo goal at the last seconds of the first chukka drawing an all-round applause from the crowd.

Dattaku, formed by Hadi Mutallab, Danjuma Kubarachi, Glory Mbano and Aminu Ahmed started on a half a goal advantage due to their handicap inferiority and they extended their lead to 2 ½ goals with Ahmed scoring twice in the first chukka.

Lagos GDF Global which featured Kabiru Saidu, Ahmadu Umar, Funsho George and Abdulahi Jugunu laboured all through to keep in touch with hitman Umar reducing the deficit by converting a 60 yard penalty.

Cascalito, as the former groomer from Ibadan Polo Club is fondly called, scored two more goals to put GDF on the lead heading to the penultimate third chukka.

Jugunu kept GDF further in front scoring in the third chukka but the game was turned around by Mbano and Kubarachi – the latter scoring from a near-impossible angle despite challenge by Umar for. 4 ¼ – 4 lead.

Dattaku patron Mutallab then converted a 40 yard penalty to widen the lead going to the last chukka. Kubarachi scored two quick-fire goals at the start of the closing chukka to put the game to bed rendering Umar and Saidu’s goals which were GDF’s fifth and sixth inconsequential.

There are four matches on the schedule for today with the Majekodunmi Cup tie between Leighton Kings and Keffi Ponys/Western Bet the pick of the pack.

The Kings powered by Bowale Jolaosho are a +21 handicap team, the highest in the history of polo in Nigeria are billed to commence the match on a four-year goal deficit due to their handicap rating.