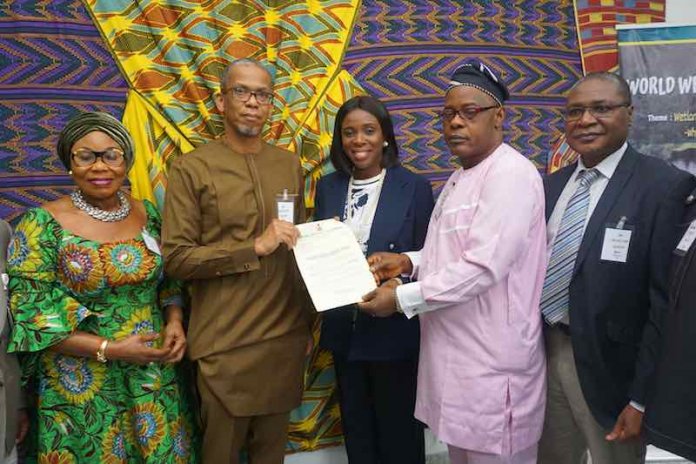 Nigeria LNG Limited (NLNG) has received a Letter of Nomination from the Federal Ministry of Environment to make Finima Nature Park, a conservation park managed by the company, a Ramsar Site of International Importance.

Finima Nature Park is a 1,000 hectares land of freshwater swamp forest lying along Nigeria’s southern coastal area on Bonny Island, Rivers State. The park was designated an internationally acclaimed centre for Wetland Education and became a member of Wetlands Link International in 2019. This made it one of the 350 Wetland Centres globally and the second in Nigeria, according to a statement by NLNG’s Manager, Corporate Communications and Public Affairs, Sophia Horsfall..

Wetlands are areas where water covers the soil, or is present either at or near the surface of the soil all year or for varying periods of time during the year, including during the planting season.

The letter was presented to the company by the Minister of State for Environment, Chief Sharon Ikeazor, who was represented by the Director of Forestry, Mr. Tiamiyu Sikiru, during a visit by the ministry officials to NLNG’s Plant site and Finima Nature Park on Bonny Island to celebrate 2020 World Wetlands Day.

The park, managed on behalf of NLNG, by the Nigerian Conservation Foundation (NCF), was established in 1999, as part of NLNG’s response to global environmental concerns and the need for a more sustainable environment.

A Ramsar site is a wetland designated to be of international importance under the Ramsar Convention which is an intergovernmental environmental treaty established by UNESCO in 1971.

The Letter of Nomination is the company’s last requirement for the attainment of Ramsar Site status, having met all the other conditions, including being a haven for migratory birds and a Wetland Education Centre. “On completion of the process, Finima Nature Park will be listed as one of the 2,300 sites in the world.”

Receiving the Minister at the NLNG Plant, the General Manager for External Relations and Sustainability, Mrs. Eyono Fatayi-Williams, said NLNG is committed to ensuring a sustainable environment that will cater for the younger population, as well as those unborn. She stated that NLNG fully understands the importance of wetlands as a means to reducing the carbon footprint of the Oil and Gas Industry’s activities in Bonny.

“The philosophy underpinning the Nature Park, which acts as a carbon sink through the CO2 sequestration abilities of the vegetation, also aligns with our contribution to the reduction of gas flaring in the country through our commercialisation of natural gas which would otherwise have been flared,” she said.

While giving assurance of NLNG’s commitment to protecting the park and boosting activities to encourage eco-tourism, which will impact positively on socio-economic life in Bonny, Mrs Fatayi-Williams also remarked that NLNG places significance on the preservation of plant and animal species found in the wetlands of the park.

Other guests at the presentation include the Chairman of NCF Council, Chief Ede Dafinone; NCF Director-General, Dr. Muhtari Aminu-Kano; member of NCF Council and a director in the NLNG Board, Chief (Mrs) Cordelia Agboti, among other NCF officials.