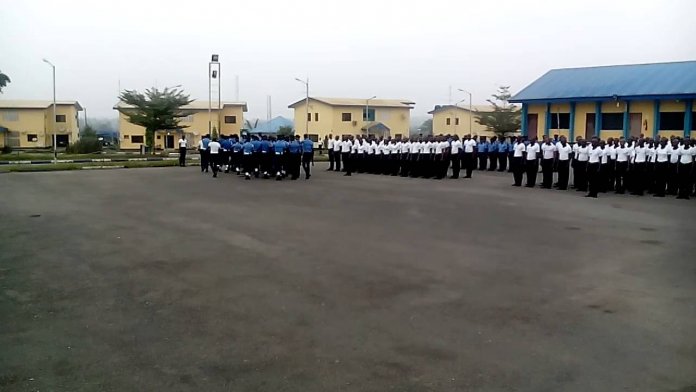 The Nigerian maritime education and training system was established to provide training for all levels of manpower for the maritime sector of the Nigerian economy. However, due to technology advancement and international conventions, the system encountered many of problems. For instance, it does not have sufficient and qualified manpower, facilities and equipment to train modern day seafarers.
Realising the important role of shipping in the development of a nation’s economy, the Nigerian government in 1959, established a shipping company with six old ships.

These were shortly increased in number and tonnage to enable Nigeria carry a fair share of the total sea-borne trade generated along the West and Central African sub-region at that time, of which over 70 per cent originated from Nigeria.

But there was maritime manpower shortage at this time: the newly established shipping company and other maritime institutions such as ship, cargo surveying, clearing and forwarding agencies were all virtually run by expatriates.

In view of this, the federal government of Nigeria decided to establish a nautical school to train all levels of manpower for the Nigerian maritime industry. Accordingly, in 1968 it commissioned an International Maritime Organisation (IMO) body of experts to do a feasibility study for this purpose. In 1972, an internal body was appointed to follow up the first study. Finally, in 1976, the third and final IMO sponsored body of experts was engaged to do the same feasibility study before the government gave the green light for the Nautical College of Nigeria to be established in 1977.

Apart from problems that face maritime education and training system in Nigeria as a result of new and changing technology and international legislation, there are also additional problems of a more general nature.

One of the major problems plaguing maritime education and training system in Nigeria is lack of maritime industry’s support. Experts believe the major problem of nautical education in developing countries is that those who provide funds for training are not always the same consumers of the products. Until recently, pilots were trained abroad because of lack of simulation technology
Although use of simulation technology for training purposes has been a feature of several industries especially the aircraft industry for many years, it is still relatively new in the maritime and related industries.

The first attempt at ship bridge simulation appeared in Sweden and the Netherlands in the late sixties, being initially intended for research work only. It was not until 1976 that the first simulator designed with the specific aim of training seafarers was installed at La Guardia Marine Terminal, New York.

The basis for using simulators in education and training, according to maritime expert, Lucky Amiwero, is captured in the old adage: ‘Tell me, and I will forget. Show me, and I may remember. Involve me, and I will understand.’
According to Amiwero the role of simulation is to reproduce practical situations so that experience can be gained in a selective manner under controlled and repeatable conditions.

“This means that for participants, the result of simulation should not just be the cognitive perception but also experience. Taking this same line of thought, another maritime expert, Akintunde Jonson, defined simulation as an untaught event in which the participants have roles and are required to accept the responsibilities and duties of professionals.

“Central to simulation therefore is neither the hardware nor software but the participants. Simulators are a proven tool in providing a highly realistic training environment for all mariners, and have the potential to improve training efficiency in many different tasks.
“They can also provide for the assessment of knowledge and skills and for their transfer to shipboard practice because they enable maritime academies to offer close-to-reality training for important relatively complex and potentially dangerous tasks without any physical effect on ships and trainers,”he stated.

A bold move
In a bid to ameliorate the challenges in maritime education and training system in Nigeria, guarantee capacity building and save the multi-million-dollars hitherto spent abroad, the Maritime Academy of Nigeria (MAN), Oron, Akwa-Ibom State has invested heavily in simulation equipment.

The equipment, which will be installed later this month or early March this year, will change the story of an institution that was on the death bed before its recent turnaround.

With facility for that purpose already on ground, it is expected that cadets who were denied the opportunity of proper training due to the rot in the past that nearly killed MAN, will now be among the best trained in the world.
THISDAY learnt that at the centre, there would be several navigational bridge simulators imitating the driving of an actual ship, and installed in special rooms imitating real ship bridges in build and functions as closely as possible. Simulators are created to feel as authentic as possible, regardless the type, length or weight of the vessel.

The training drive on the navigational bridge simulator has to imitate the weather conditions characteristic to all sailing areas as closely as possible. Future mates-captains must be able to manoeuvre all vessel types in strong winds and storm, consider currents, ice conditions, shoals and this during night and day.
Students can practice berthing in real ports, docking to floating docks, operating tugs, manoeuvring in canals or simple transit sailing.

The navigational bridge simulator enables realistic simulations of rescue operations in case of collision of ships, fire or being caught in a storm. Different situations – people overboard, lifeboats in the water, ships on fire or sinking, giving distress signals, etc.

Troubled past
Formerly known as the Nautical College of Nigeria, the Maritime Academy of Nigeria, Oron, AkwaIbom State was established in 1979 by the Federal Executive Council No.EC.(77) 172.
It was designed as an integrated institution for the education and training of shipboard officers, ratings and shore-based management personnel. The Academy graduated its first batch of Cadets in 1983.
In 1988, the scope of the college was upgraded by the promulgation Decree No. 16 of 1988 with a statutory mandate to train all levels and categories of personnel required for the effective and efficient operation of all facets of the Nigerian Maritime Industry.
However, like most institutions in Nigeria, several years of mismanagement and massive corruption brought the once enviable institution to its knees.

It got so bad at a point that the institution’s debt rose to N7.2 billion, the debt ranged from staff claims to payments for various contract of which some have been completed and ongoing projects.
At the time, the campus of the academy was littered with unfinished jobs while basic teaching and learning infrastructures were lacking.
Some members of staff of the academy were involved in contract racketeering which accounted for the many sub-standard implementations.
Also, essential facilities like the nautical science building, survival pool, main auditorium, male cadets hostel, engineering workshop, boatyard and many others were abandoned.

It got so bad that some students of the academy were forced to either sleep outside or in the classrooms because hostel accommodation meant for only eight students per room were overstretched with more than 17 students in each hostel room.
This was despite the fact that aside its budgetary allocation and its internally generated revenue from short courses, the academy is also entitled to five per cent of total revenue collected by the Nigerian Maritime Administration and Safety Agency (NIMASA) as provided in sub section 2b, sub section 16 of the NIMASA Act 2007.

FG’s intervention
In a bid to prevent a total collapse of the institution, the federal government had on September 5, 2017, set up an interim management committee to revamp the institution and restore its lost glory.
The Minister of Transportation, Mr. Rotimi Amaechi, who inaugurated the interim management committee in Abuja, said the level of decay at the MAN was shameful and that he wanted to be remembered as the minister that fixed the rot.
The committee was at the institution for a period of six months after which Commodore Duja Effedua (rtd) stepped in as the substantive rector of the of the academy.

It’s been over two years since Effedua became rector and the institution has witnessed massive transformation with 98 per cent of its infrastructure and equipment been put in place. All these were achieved without bank facility.
Recently, when THISDAY visited the institution to assess the situation of things, findings showed that it has been transformed.
As a matter of fact, right from the road leading to the academy and the main gate, the therapeutic ambience, cleanliness and serenity of the environment and the soothing breeze sweeping across the length and breadth of the academy were obvious that something new has been caused to happen.

It is not just infrastructure and equipment that has been put in place, books and computers and smart boards for teaching have also been provide. Also, high quality books have been given to cadets for free in addition to laptops to enhance their studies.
Under the new management, there is a deliberate regime of emphasis on quality of students above quantity. To this end, cadet intake that used to be 1,800 has been reduced to 256 for the 2018/2019 academic session.
For effective and cost saving academic time management, Effedua said cadets are now enjoying free mandatory courses with newly introduced onboardseatime training for National Diploma cadets.

He said he has ensured all cadets and enrolling nautical science students as members of Nautical Institute, United Kingdom while marine engineering students are also members of Institute of Marine Engineering, Science and Technology (IMAREST) also of UK.
Also, as part of drive to address infrastructural challenges and provide conducive accommodation for cadets and staff, the academy within 18 months has completed projects, which were hitherto abandoned. Some of the projects was a nautical science building that was abandoned for close to 15 years at foundation level. What looked like a makeshift library being used with outdated literatures has been rebuilt with up to date reading materials in addition to high quality free books given to cadets. A modern lecturers briefing room and lecture theatres fitted with teaching and learning aids have also been put in place.
As part of finding solutions to the problems he inherited, Effedua said, “I met a huge debt profile which I inherited from a regime that had so much funds and I wondered why they didn’t pay.

“I have paid over 80 per cent of genuine claims brought forward to me. I plugged areas of revenue leakages by avoiding payment of suspected fraudulent claims. It will interest you to know that after referring such claims to the Economic and Financial Crimes Commission (EFCC), some of those making the claims never showed up again.”