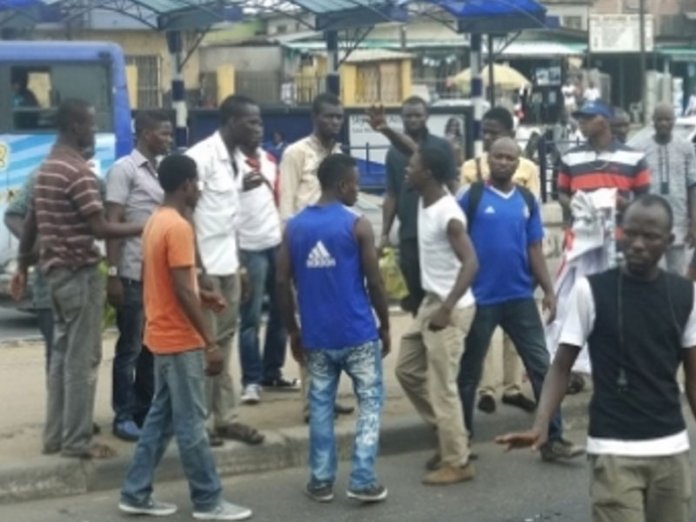 Barely 24 hours after the Lagos State government praised motorcycle and tricycle operators for complying with the restriction from some local government areas, 10 highways and 40 bridges, scores of people were yesterday injured and three feared dead in a violent clash between the police and the operators, according to eye witnesses.

To protest the ban and end to their means of livelihood, motorcycle operators popularly known as Okada took to the streets of Ijora Olopa and went all the way up to Costain.
What started as a peaceful protest soon turned violent as they clashed with police officers who were deployed to enforce the ban.

In the face off, there was exchange of gunshots as bonfires were set up in the middle of the road, thus deterring motorists who were forced to turn back to look for alternative routes in and out of Apapa as the road was fully blocked.
However, the state Police Public Relations Officer, DSP Bala Elkana, said he was not aware of any casualty in the clash.

Meanwhile, thousands of commuters were yesterday stranded at different parts of Lagos as the effect of the ban took its toll on them.
From suburbs like Okota, Isolo, Ikotun, Egbeda, Idimu, Iyana Ipaja, Jakande, Ago to bustling areas like Apapa, Yaba, Oshodi, Ikeja, Surulere, Maryland, Ojota, Mile2 and 12, Ketu, Cele, Festac Town, Satellite, Okokomaiko, Ijora, Orile and Mushin, the toll was harsh.

Even parts of the island were not left out.
Checks also revealed that the rippling effect was felt by all, from the large number of stranded passengers at bus stops, to a sharp increase in transport fares across the state.

In some areas, transport fares soared to about 100 per cent, and save for the Bus Rapid Transit (BRT), which was a sort of reprieve, as they maintained their fares, more commuters would have been stranded.

In places where a usual fare would have cost N100, the conductors ended up charging between N200 and N300.
Meanwhile, in different parts of the state, school children were seen hopping on open trucks, begging for lifts from strangers, while some were forced to trek.
Also, some jockeys took advantage of the situation as they made brisk business in ferrying pedestrians to their destinations for a fee, which was quite on the high side.

For the jockeys in Egbeda, they charged passengers as much as N3,200 for a trip to Ikeja for two persons.
Meanwhile, the Lagos State Governor, Mr. Babajide Sanwo-Olu had directed the management of Lagos Bus Services Limited (LBSL) to deploy a fleet of 65 buses along major routes from yesterday to provide succour and ameliorate the hardship commuters might face.

Despite the directive, its impact was barely felt in the new routes where the LBSL extended its services to- Ikeja to Ogba; Berger to Ogba; Ikeja to CMS; Oshodi to Ajah; Obalende to Ajah; CMS to Ajah and Inner Marina to Ajah.
According to the MD/CEO Lagos Bus Services Limited, Mr. Idowu Oguntona, extending the services of the company to these locations will help reduce the vacuum created by the restriction order.

While maintaining that commuters will enjoy the pleasure and comfort of riding in the new buses along these routes, Oguntona disclosed that more buses will be deployed by the company in no distant time.
Sanwo-Olu had on October 1, 2019, pledged in his speech on The Platform, an annual leadership symposium organised by the Covenant Christian Centre, that his administration would harmonise okada operations and develop a regulation system for better accountability.

He said: “To also solve the traffic issue of Lagos is also to talk about the okada issue; okada is everywhere, anywhere you see. Part of the things that we are going to be doing is not to leave anybody behind.
“You see some okada riders that are branded, that use smart ways to pay when you finish the journey. We are trying to harmonise all of them and be able to come up with a regulation system where we can account for every okada rider. We will know who they are, we can manage them,” he was quoted as saying.

The union of Specialised Motorbikes Operators have also criticised the recent ban. According to Co-founder and CEO of Metro Africa Xpress (Max.ng) and Gokada, Mr .Adetayo Bamiduro, the government should regularise the sector as against outright ban.

He noted that since inception, the companies have complied with the Lagos State rules guiding commercial motorbike operations in the state.
He said, “In communicating the decision to restrict the operations of commercial motorcycles and tricycles in the affected areas, the government spokesperson cited ‘Safety and Security concerns’ as the primary reasons for the decision”.

Meanwhile, despite eye witnesses’ reports, the state Police Public Relations Officer, DSP Bala Elkana has denied the shooting, stressing that no casually was recorded.
Although he admitted that policemen actually dispersed the protesters, he said it was because they set bonfires and attacked innocent citizens.

But eyewitness account said the victims were hit by bullets as policemen attached to Badia Division shot sporadically to scare the protesters, who had destroyed vehicles and property.
Having been dispersed from the earlier spot, it was learnt that the protesters regrouped at the front of the secretariat of Apapa Iganmu LCDA along Gaskiya road, where they were also chased away by the police.

Bala said: “It was a violent protest because they attack innocent citizens and we cannot fold our arms to watch them perpetrate evil attack . I am not aware of any casualty. From the brief I have gotten so far, nobody was killed or injured by the police.”
The Lagos State Police Command has also reiterated that motorcycles used for courier services are not included in the restrictions.

Elkana said: “Operators of courier services must strictly obey traffic laws and ensure that they do not drive against traffic (one way).
“Dispatch riders must put on their crash helmets and should have the dispatch box fixed at the back of the motorcycle. The bike must strictly be used for courier purposes, no carrying of passengers. Power bikes are also not affected by the restrictions.”

Meanwhile, the police have arrested 24 suspects for blocking major roads in Ijora, causing obstructions.
“The hoodlums caused major obstructions on the roads, burning tyres, looting and stealing from unsuspecting road users. Police officers from Ijora Badia, Area B Command and Special Strike Force on Social Miscreants were promptly deployed to the scenes.

“The situation was brought under control. The obstructions were cleared for free flow of traffic. No life was lost. Twenty four suspects were arrested. Investigation is ongoing and the suspects will be charged to court,” Elkana explained.

THISDAY gathered that tricycle operators from Lagos Mainland, Yaba and Oyingbo also staged a peaceful protest at Maryland against the ban.
The Chairman, National Union of Tricycle Operators, Yaba/Mainland, Mr. Seun Adeleke, said government’s decision was unfair as it would plunge many able-bodied young men into unemployment.