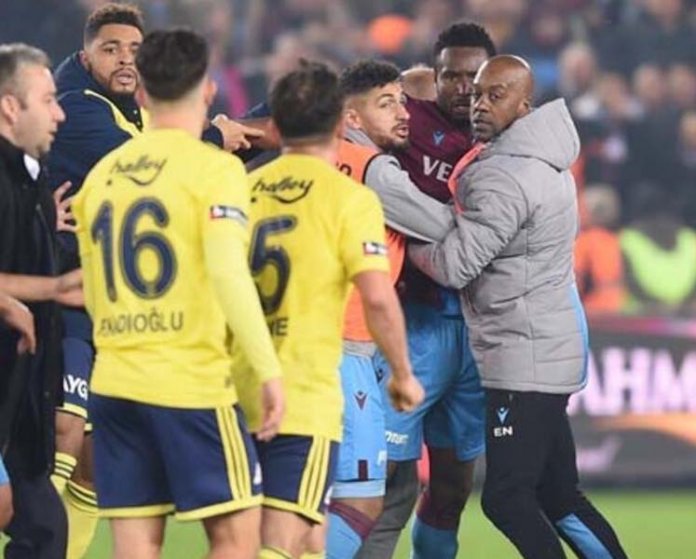 Although Mikel’s Trabzonpsor won the Turkish Super League clash 2-1, the talking point of the encounter was the racial abuse and it took the intervention of the teammates of AFCON 2013 winner to prevent the brawl from degenerating into further ugly situation.

According to report from Owngoalnigeria.com, Mikel took on Emre at the end of the ill-tempered game after the former Inter-Milan and Newcastle United midfielder was alleged to have called the Nigerian a “Nigger” out of frustration of losing to Trabzonspor at the Medical Park Arena.

It’s not the first time that Emre has been accused of saying such racist remarks to to black players as he once did same to former Ivory Coast international Didier Zokora and without an apology attempted to shake the hands of Zokora in the reverse tie which the former Elephant star declined.

Mikel is believed to have already filed a complain with the Turkish Football Federation for necessary action to be taken against Emre with trabzonspor strongly behind the Nigerian.

Since joining the Turkish side, Mikel has emerged as one of most important players and over the weekend he once again distinguished himself with a performance which clearly shows that the former Chelsea midfielder still has the class that made him a hit at Stamford Bridge years ago.

THISDAY recalled that it was not the first time the Nigerian star would be involved in racist drama.

On Sunday October 28th, 2012, during his stay at Chelsea and in a tense touch class with Manchester United, the British press reported a scene of an alleged racial remark by an Irish centre referee Mark Clattenburg, who was said to have referred to Mikel as ‘Monkey’ but the allegation was dismissed on the ground that the Irish referee said ‘shut up Mikel’ instead of the ‘shut up you monkey’ that the press reported.

The Irish intonation was said to have been misinterpreted to mean monkey. However, Mikel’s former team mate, Ramires who was the closest to the incident but not vast in English language had explained that his instinctive reaction was to seek confirmation from the Nigerian which sparked up the controversial slant.

editor - May 28, 2020 12:03 am
0
The Verdict By Olusegun Adeniyi, Email: olusegun.adeniyi@thisdaylive.com In the past one week, dozens of people have sent me a four-minute video clip of Governor Ben...

Group Calls for Reappointment of Wabote