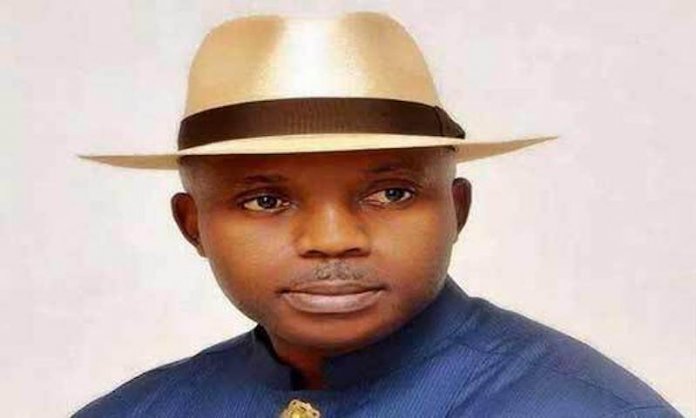 The Economic and Financial Crimes Commission (EFCC) on Monday arraigned a member of the House of Representatives and former Chairman, House Committee on Petroleum (Downstream) and Gas Resources, Hon. Nicholas Mutu, over corruption and fraud allegations in the sum of N320.1 million.

He was arraigned alongside two firms — Airworld Technologies Limited and Oyien Homes Limited — on an 11-count criminal charge before Justice Folashade Giwa-Ogunbanjo of the Abuja Division of the Federal High Court.

He pleaded not guilty to the charges when read to him.

Following his not-guilty plea, the lawyer to the EFCC, Ekele Iheanacho, prayed the court to fix a date for trial to commence.

He also asked the court to order the remand of the defendant in prison custody, pending the commencement of trial.

However Mutu’s lawyer, Mr Patrick Ikwueto (SAN), prayed the court to release the defendant to him but the request was vehemently opposed by the prosecution on the grounds that the defendant had been evasive and refused to report to the commission’s office in line with the administrative bail granted him on August 16, 2018, after his arrest on allegations bordering on corruption.

He argued that since the bail was taken by his former lawyer, Anthony Ikoli (SAN), the defendant refused to report to the commission’s office despite several demands for him to report.

The prosecution also informed the court that although at a point, the defendant’s sureties were arrested for them to show cause why they should not forfeit the bail sum, Mutu failed to turn up “until today’s hearing because of the fear of the warrant of arrest”.

Iheanacho added that the defendant only came to court Monday because he was afraid that a warrant of arrest will be issued against him.

However, the defendant’s lawyer urged the court to discountenance the prosecution’s submissions and release Mutu to him on self recognizance pending the hearing of his bail application.

He assured the court that his client would always be in court at every adjourned date.

Justice Giwa-Ogunbanjo, however, noted that since there was no motion for bail in the court record, Ikwueto should file the bail application before the close of work.

The judge, who took into consideration the fear expressed by the prosecution on the availability of the defendant in court, also considered the defence counsel’s argument.

She noted that bail is at the discretion of the court and that the offence for which the defendant was standing trial was bailable.

The judge then granted the plea of the defence counsel and ordered that the defendant should continue to enjoy the previous administrative bail granted to him by the EFCC during the investigation.

“I will give him the benefit of doubt,” she ruled.

Justice Giwa-Ogunbanjo ordered Ikwueto to file the application for bail and serve the prosecution before the next adjourned date.

The judge also said that she would hear the bail application first in the next adjourned date.

She then adjourned hearing in the matter till February 25.

However, there was a drama outside the court’s premises as EFCC operatives re-arrested Mutu and whisked him away to their office.

Part of the charge is that Mutu while being the Chairman, House Committee on the Niger Delta Development Commission between August 2014 and August 2016, procured Airworld Technologies Ltd to conceal the sum of N320,159, 689.63 to be paid by Starline Consultancy Services Ltd when he reasonably ought to have known that the said sum of money formed part of proceeds of corruption, gratification and fraudulent acquisition of property contrary to the Money Laundering Prohibition Act.