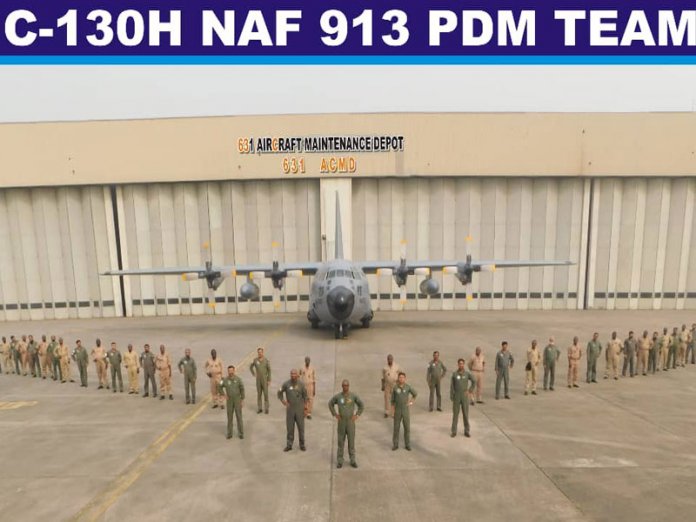 In its continuous quest to curb capital flight and localise capacity building, the Nigerian Air Force recently carried out another in-country Periodic Depot Maintenance on its second C-130H aircraft, NAF 913, which was afterwards deployed to convey weapons and logistics to the different theatres of operation, Chiemelie Ezeobi reports

The Nigerian Air Force (NAF) recently recorded a historic feat by deploying its locally reactivated C-130H aircraft, NAF 913, to support ongoing operations against insurgency in the North-east and other parts of the country. Given the recent pockets of terrorist attacks in the North-east, the deployment will also see the aircraft carry fresh troops to the theatre of operations to complement the efforts of the troops on ground.

The aircraft was locally reactivated at the Nigerian Air Force Aircraft Maintenance Depot, Ikeja, Lagos after an in-country Periodic Depot Maintenance (PDM), was carried out on it. The in-country PDM is one of the Chief of Air Staff (CAS), Air Marshall Sadique Abubakar’s multiplier effects to curb capital flight by domesticating such repairs.

The local reactivation of NAF 913, which was carried out by Messrs ShaheenFoundation of Pakistan in conjunction with NAF engineers and technicians, involved extensive disassembly of the aircraft parts as well as inspection, repair and overhaul of components, amongst others.

According to the Director of Public Relations, Air Commodore Ibikunle Daramola, the involvement of NAF personnel in the reactivation was to further expose them to every stage of the in-depth maintenance process, with a view to building the NAF’s inherent maintenance capabilities.

The critical role of airlift in ensuring that logistics requirements of troops involved in various internal security operations are met within the shortest possible time cannot be overemphasised. The C-130H fleet, in particular, has been one of the key fulcrums in providing sustainment to our troops involved in ongoing internal security operations through airlift and movement of troops, equipment, armament and other materiel.

The C-130H has also been critical to NAF’s response to emergencies or in fulfilling Nigeria’s responsibilities to international peace keeping operations and ensuring stability, not just in the West African sub-region but also across the continent.

At its inauguration at the Aircraft Maintenance Depot (ACMD), Lagos, CAS said the refitting and indepth maintenance of the aircraft was the continuation of a new dawn in the strategic plan to develop a robust capacity for in-country maintenance and sustenance of NAF platforms and equipment.

Abubakar said: “ From the onset of this administration, we had determined that it was imperative that we develop sufficient local maintenance capacity and capability to enable us effectively project air power for current and future operations. One critical aspect of air power is strategic airlift capability.

“This important requirement of the Nigerian Air Force is essential to the deployment and sustenance of forces across distant battlefields. In this regard, judicious efforts were made to locally conduct Periodic Depot Maintenance of three C-130H aircraft; NAF 917, 913 and 918 so as to boost combat support efforts for Armed Forces’ operations across the country.

“You would recall that I was here (at the maintenance depot) on 24 June 2019 to commission the first of the three C-130H aircraft upon the completion of its Periodic Depot Maintenance. The aircraft (NAF 917) has subsequently been involved in so many missions both within and outside the country.

“Prominent among the missions conducted was the delivery of relief materials to flood victims in Mozambique and Zimbabwe, as well as moving logistics for ongoing operations nationwide. So far, the aircraft has successfully flown 732 hours since the Periodic Depot Maintenance was completed.

“ I am thus delighted to be here today for the commissioning ceremony of the second C-130H aircraft. Beginning today, the aircraft, NAF 913, would improve the operational efficiency of the Nigerian Air Force. This would give the required impetus for prompt deployment of troops and the provision of logistic support required for operational effectiveness in all theatres of operation. This accomplishment is a clear manifestation that our efforts at enhancing self-reliance is gradually producing the desired outcome.

“ Let me at this juncture specially appreciate Messrs ShaheenFoundation of Pakistan for their contribution towards the timely completion of the maintenance activities on the aircraft. I would also like to congratulate all the Pakistani Air Force and Nigerian Air Force engineers and technicians who participated in this outstanding project. I urge our engineers and technicians to make the best use of the knowledge acquired during the PDM so that you can effectively apply same in the conduct of future maintenance on the C-130H fleet.

“While commending the commander and his team for a job well done, I am happy to notethat some of the benefits of the in-country PDM include saving the nation huge foreign exchange andsignificantly improving our human resource capacity and competence thereby repositioning the NAF for better service delivery.

“Our modest accomplishments so far have greatly enhanced the serviceability of our aircraft fleets and boosted our capability to project air power within and beyond the shores of our dear country. It is worthy to mention that apart from this C-130H being commissioned today, we are equally undertaking the local reactivation of three Alpha Jets and one Mi-35P helicopter.

“It is also my belief that in a few months ahead, we will also be here to commission the third C-130H, that is, NAF 918. These local capacity enhancement efforts are in line with the federal government policies and aspirations that encourages Ministries, Departments and Agencies to look inwards and evolve innovative solutions to the myriad of challenges the nation is confronted with.

“Accordingly, the NAF will continue to pursue its capacity building initiatives through the conduct of local PDM all aircraft types. This will undoubtedly enable the service to fulfill its primary responsibilities as provided in the constitution of the Federal Republic of Nigeria and to meet a broad range of national security imperatives.

According to him, major among these is the administration’s focus on human capacity development for self-reliance in the maintenance of NAF platforms and associated support equipment.

“To achieve this lofty objective, the current NAF administration has intensified the conduct of in-country PDM which before now was conducted overseas on selected NAF aircraft including the C-130H fleet,” he said.