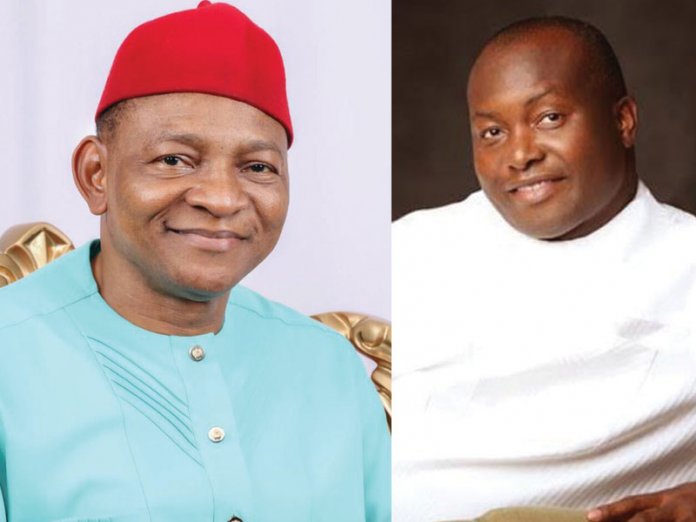 Election litigation is becoming sophisticated as illustrated by the recent judgment obtained by Dr. Obinna Uzoh against Chief Ifeanyi Ubah on who should represent Anambra South Senatorial District in the Senate, Tobi Soniyi reports

When it comes to election litigation, no state has enriched our jurisprudence as much as Anambra.
Politicians in the state have demonstrated unparalleled confidence in the nation’s judicial system. Rather than take the law into their hands, they have always chosen to fight their cause through the courts. For this, Anambra deserves commendation.

Continuing with this tradition, Dr. Obinna Uzoh of the Peoples Democratic Party, took advantage of a suit- CV/3044/2018 filed by a member of the Young Peoples Party, Mr. Anani Chuka, before a Federal Capital Territory High Court in Abuja to launch an audacious bid for the Anambra South Senatorial District.

The Independent National Electoral Commission had declared Chief Ifeanyi Ubah of the Young Peoples Party as the winner of the election into the senatorial district.

In applying to join the case, Uzoh appeared to have done his research very well. He knew he did not stand a chance if he challenged Ubah before the election tribunal. He also did not originate the pre-election case filed by Chuka, though there are unsubstantiated claims that he and Chuka are working hand in glove. Even if they are, it is not illegal to do so.

The judge consequently ordered INEC to withdraw the certificate of return issued to Ubah and directed that a fresh one be issued to Uzoh of the PDP who came second at the election.

A comparison of these two certificates, he contended, revealed other differences such as logo, font, signature, etc.
Uzoh said that Ubah submitted the forged NECO certificate to INEC, the same having been cloned.

Based on Uzoh’s arguments, the trial judge found in his favour.
Justice Kawu held, “The deposition in the affidavits evidence was not controverted by the 1st defendant who was given ample opportunity to do so, but refused and neglected to file any process in challenge of the claimant’s claim after being served with all the processes by substituted means and hearing notices having been duly served too.
“The unchallenged facts remained uncontroverted.”

The judge said he was satisfied with the evidence led in the case and held that the NECO certificate submitted by Ubah was fake. The judge also held that the party that nominated Ubah did not hold any primary and consequently, declared his nomination invalid.

Shocked by the FCT High Court’s decision, Ubah, who claimed he had no knowledge of the suit, applied to the judge to set aside the judgment.

However, the court reaffirmed its earlier order sacking him as the senator representing Anambra South. Justice Kawu, in a ruling, declined Ubah’s request to set aside his April 11, 2019’s judgment.
Ubah had filed the application before the court praying for an order setting aside the judgment on the grounds that it occasioned a grave miscarriage of justice against him.
He said he was not served with the court processes or the hearing notice throughout the proceedings leading to the judgment.

Temporary Relief
Hoping that Ubah would be able to persuade him to set aside his judgment, on December 4, Justice Kawu initially gave the senator a temporary relief.

He granted an order of stay of execution restraining the Senate President from swearing in Uzoh, pending the hearing and determination of Ubah’s application.

The judge also ordered all parties to the suit, including INEC to maintain the status quo in the meantime.
This temporary relief was, however, shortlived. In a January ruling, the judge dismissed the application for lacking in merit.

It also dismissed a motion filed by another claimant to the PDP senatorial ticket, Chief Chris Uba, to be joined as an interested party in the substantive suit.

In dismissing the two applications, the judge stated: “In a nutshell, the preliminary objections of both the claimant and 4th defendant succeed by virtue of section 285(9)-(12) because the application of the 1st and 2nd defendants together with that of the party seeking to be joined were brought after 180 days allowed by the constitution.”
On lack of service, the judge held: ‘There is enough evidence before the court to show that all the processes were served on the 2nd defendant personally and the 1st defendant by substituted means because of the inability of court’s bailiff to access him directly. In fact, several hearing notices were served on the defendants.

Ubah Appeals
Dissatisfied with the decision of the judge, Ubah has filed an appeal against the judgement of the Federal Capital Territory High Court in Bwari that sacked him as a lawmaker.

Not leaving anything to chance, he also filed an application for a stay of execution of the judgement pending the determination of his appeal at the Court of Appeal in Abuja.

A stay of execution is a court order to temporarily suspend the execution of a court judgment or court order.
Ubah described the judgement as a mere distraction, saying that he is still a senator.

He said, “I have appealed against the judge’s refusal to set aside the judgement. I have also filed an injunction for a stay of execution. I have absolute confidence that the court of appeal will do justice and set aside the judgement”.
He also faulted the allegation that he tendered a forged NECO certificate, saying: “That’s photocopy effect. Tell them to swear to an affidavit to that effect or go to NECO and ask. They said it was forged earlier but NECO said it was OK. They are using INEC photocopy to deceive people. Why can’t they go to INEC for a certified copy? They should wait for their waterloo in due time.”

He challenged his traducers to approach NECO with their fact. “They should depose to an affidavit and present it to the public as I did,” he added.

He also faulted the judgment of the high court on several grounds, claiming the FCT High Court lacked the “territorial jurisdiction” to entertain a matter that arose from Anambra South senatorial election primaries.
The mischief of filing the case against him in Abuja and not in Anambra was to ensure that he and Chris Uba of the PDP were not aware of the proceedings, he said.

Uzoh, however, rejected this argument saying: “Where primary is not held, any state or FCT high court or FHC has jurisdiction to entertain the case. In the case of Lau v PDP (2018) 4 NWLR (Pt. 1608) 60 at 110-111 and 123, the Supreme Court held thus: ‘The law has moved on since the 1999 Constitution vested the Federal High Court with exclusive jurisdiction over any action for a declaration or injunction affecting the validity of any executive or administrative action or decision of the Federal Government or any of its agencies, which includes INEC. The current position of the Electoral Act, the Federal High Court and the High Court of a state or the Federal Capital Territory have concurrent jurisdiction to hear and determine disputes arising from the conduct of a party’s primaries….’”

There is, however, a critical issue that the trial judge appeared to have glossed over. Even though Chuka filed the case on 19 October 2018, well before the National Assembly election was held on 16 February 2019, curiously Uzoh applied to join the suit on 28th March 2019 after the election was held. Whatever reliefs he asked for automatically became post-election matters reserved for election tribunal. This appears to be the basis for the issue raised below by Ubah.

Ubah said that the FCT High Court lacked the jurisdiction to hear and determine a post-election matter already settled at the electoral tribunal and the Court of Appeal that gave him victory against Chris Uba.
He expressed shock that contrary to Section 285(13) of the 1999 Constitution, the court granted the wish of Uzoh who was not even a candidate in the February 23 election and did not go through the entire stages of the election as the winner of the election.

Ubah also said that he was not at any time served with any of the court processes thereby infringing on his right to a fair hearing. According to him, you can’t shave someone’s head in his absence.
However, Justice Kawu in his judgment said he was satisfied that all necessary parties were served as shown by the proofs of service.

He said this “kangaroo tactics” adopted spells doom for the electoral process and justice system if allowed to stand, arguing: “The court also lacks jurisdiction to make far-reaching findings, some of which border on illegality and are contentious as an originating summons was used to commence the suit. Such a suit must be commenced by a writ of summons to allow Senator Ifeanyi Ubah to call witnesses to testify and rebut the unfounded and malicious allegations made against him. This cannot be done by an affidavit but only by oral evidence as stated by Nigerian law and judicial decisions.”

Supreme Court, the Final Arbiter
As demonstrated by the Supreme Court’s judgment in the case that sacked Emeka Ihedioha of the PDP as governor, litigants are becoming creative in their approach to elections.
This creativity can also be seen in the unfolding battle between Uzoh and Ubah. Who will prevail at last, will ultimately be determined by the Supreme Court. It is a long haul. All the parties must be prepared to go through the whole hog.

No doubt, issues raised by Ubah in his appeal are quite weighty. He also has in his kitty, the judgment of the Court of Appeal upholding his election.
Besides, he is a long-distance runner. Based on the issues he raised, he stands a very good chance of setting aside the Abuja High Court judgment.

But no one should expect the matter to end soon. It is the Supreme Court that will ultimately resolve this dispute finally.

If the practice in the Senate is sustained by the present leadership of the upper chambers, Ubah will remain in the Senate until the dispute is decided by the Supreme Court. The battle has just started.