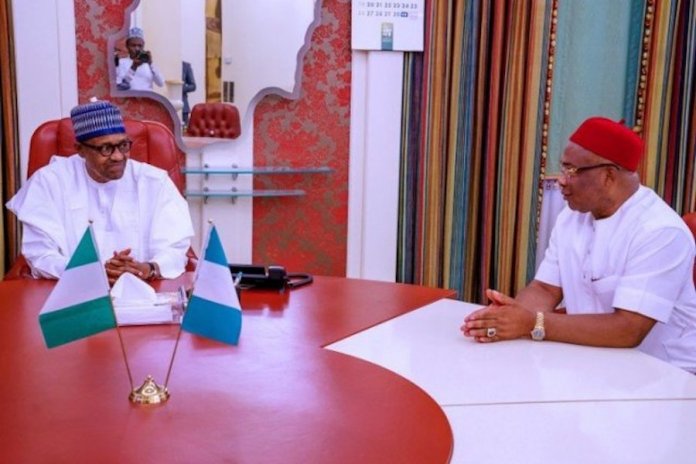 Imo State Governor, Hope Uzodinma was yesterday in Abuja formally introduced to President Muhammadu Buhari by the National Chairman of the All Progressives Congress, Adams Oshiomhole, as the new governor of the state and he came out of the meeting expressing optimism that the Supreme Court will not reverse the victory earlier given to him.

Uzodinma, who spoke to State House correspondents after the meeting, said he was unperturbed by the decision of the ousted governor of the state, Emeka Ihedioha, to approach the Supreme Court to reverse its judgment which returned him as the winner of the March 9, 2019 governorship election in the state.

He said given that the stipulated 60 days within which post-election petitions should be exhausted had elapsed, Ihedioha’s return to the apex court was an exercise in futility.

The governor recalled that he participated in the amendment of the Electoral Act which stipulated 60 days within which post-election petitions should be exhausted, adding that Ihedioha’s return to the apex court would amount to a futile exercise since it was done within the stipulated time.

He said: “So, going back to the Supreme Court, I don’t know what it means. I am not a lawyer, anyway, but with my little knowledge of lawmaking, I understand what is in the Electoral Act. So, the Supreme Court is not a market square that anytime you want, you go there.”

Speaking in the same vein, Oshiomhole, lambasted the Independent National Electoral Commission (INEC) for declaring Ihedioha as the winner of the March 9, 2019 election in Imo State, saying the commission “completely and irresponsibly misbehaved.”

Oshiomhole, who also criticised the returning officer who declared Ihedioha as the winner of the election, described the professor as a senile man who did now know that nine local governments, which Ihedioha reportedly won, did not constitute two-thirds of the 27 local government areas of the state.

According to him, INEC only exploited the monopoly of the power of declaration to proclaim Ihedioha as the winner of the election, “when he shouldn’t have been declared the winner at all.”

Castigating the commission further, Oshiomhole said that INEC had thought that even if a lunatic in the commission declared anyone winner of an election, such declaration would automatically become irreversible, alleging that such attitude only conforms to the nature of PDP.

“I think there is something the media simply refused to focus on. With all due respect, a lot of the views that people parrot are derived from what I called electronic media lawyers.

“Now, is there any of us in this room at the time Emeka was declared… Even the returning officer could not show that he scored the constitutional requirement of at least one-quarter of the total votes cast in at least two-thirds of a local government. “On that criterion alone, there is no question in the eye of the law – Emeka Ihedioha ought not to have been declared winner because he had those numbers only in nine local government areas and of course, you know you have about 27 local government areas. Two-thirds is 15.

“INEC completely and irresponsibly misbehaved by using a professor who seemed to be so senile that he didn’t know that nine is not two-thirds. This is very serious and they took advantage of the fact that once they make pronouncements, even if that pronouncement is made by a lunatic in INEC, you can’t reverse it.

“You have to go to court and that fits into PDP’s fixation – rig them out. Let them go to court. They just feel it is their birthright to continue to rig elections. So, the next time you see them talking, ask them how many local governments did PDP score one quarter of the total votes cast?” He asserted.

The apex court had in a landmark judgement on January 14, removed Ihedioha of the Peoples Democratic Party on the ground that he did not score the lawful majority votes in the Imo governorship poll.

Justice kudirat kekere-Ekun, who read the lead judgement, held that the court arrived at the decision after adding votes scored by Uzodinma in 388 polling units, which showed that he won the race.

Subsequently, the court declared Uzodinma the winner of the election and ordered the Independent National Electoral Commission (INEC) to withdraw the Certificate of Return issued Ihedioha and issue same to Uzodinma as the elected Governor of Imo State.

However, Ihedioha, has approached the apex court, seeking a review of the judgement and his reinstatement.