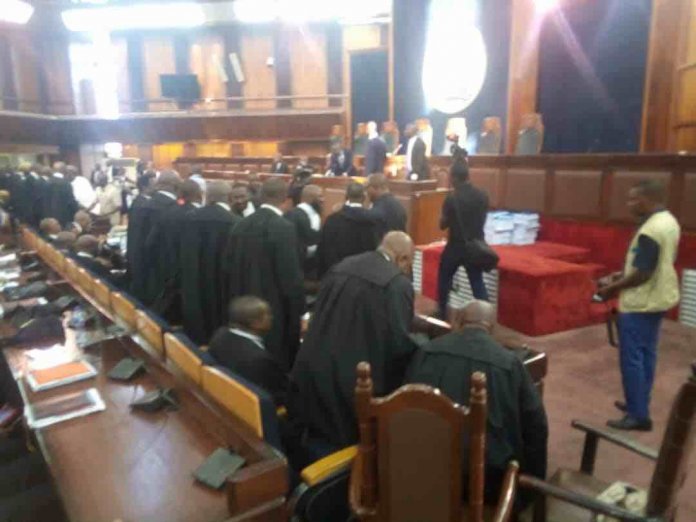 The local government crisis in Oyo State assumed a new twist yesterday with an Oyo State High Court sitting in Ibadan, the state capital, restraining the removed chairmen of the 33 local government areas and 35 Local Council Development Areas (LCDAs), from forcible takeover of the council offices across the state.

The chairmen, however, returned to work yesterday for the second day running, amidst tight security provided by the police.

The court, presided over by Justice Moshood Abass, granted the four reliefs sought by the lead counsel to the Oyo State Government, Dr. Akin Onigbinde (SAN), including an order of interim injunction restraining the chairmen from forcibly taking over the local government councils or taking steps capable of causing breach of the peace in the state.

The order of interim injunction followed an ex-parte motion filed by the state government in Suit No: I/78/2020.
Also restrained were the Attorney-General of the Federation and Minister of Justice, Mr. Abubakar Malami (SAN), the Inspector General of Police, Mr. Mohammed Abubakar; Commissioner of Police, Oyo State Command, Mr. Shina Olukolu; and the Oyo State All Progressives Congress (APC) Chairman, Mr. Akin Oke.

The parties and their agents were restrained from taking any step that could tamper with the hearing and determination of the motion on notice.

According to the court, the chairmen, as well as the four other defendants, their officers, agents, privies or otherwise, were restrained from taking steps that would cause a breach of the peace by embarking on self-help to give effect to a letter dated January 14, 2020 with reference number HAGF/OYO/2020/VOL.I/1 issued by the Attorney-General of the Federation to the chairmen and the Inspector General of Police pending the hearing and determination of the motion on notice.

However, while the court was making its order, some of the chairmen were in their office.
Reports from all the 33 LGAs and 35 LCDAs in the state showed that majority of them turned up at their offices yesterday, though there were reports of violence in some of the councils such as Ibadan North East Local Government.

THISDAY learnt that the chairmen were escorted to the offices by policemen to protect them against those who might want to stop or molest them.

At the Ibadan South West and Ibadan South LCDA, Aleshinloye, Ibadan, where the Governor, Mr. Seyi Makinde, laid the foundation of Ibadan South West Local Government Traditional Council building, there was heavy presence of security officials, with the chairmen in sight.

The state Chairman of the Association of Local Government of Nigeria (ALGON), Prince Ayodeji Abass-Aleshinloye, said majority of the council chairmen were in their offices and performing their official duties.

He said they resumed with the assistance of the police as there were instructions to Divisional Police Officers (DPOs) to provide each of them with security.
In a statement entitled, “Governor Makinde: Attempt to Legalise Illegality, he said: “the ALGON chairman, accused Makinde of dwelling in illegality, saying that they are not going to back down in reclaiming their mandate.

“It is, therefore, a huge joke to read from the government, comments of alleged illegality against the Attorney-General of the Federation, who has directed all governors to comply with the Supreme Court judgment on the issue.

“They claim they have a case in court yet they disobeyed existing judgments issued against them. They claim they are not under the AGF to obey his directive, yet they recruit thugs to prevent the exercise of constitutional mandates and orders of courts. Indeed there are rife rumours that the government is shopping for a court that will dance to its tune and help in restraining the police from carrying out the judgment of the Supreme Court. We have implicit confidence in the judiciary of Oyo State that they will not join the governor in his quest to confer any form of recognition on these illegal acts of government for which they are doing forum shopping.”

He spoke at the foundation stone laying ceremony for the construction of traditional council building, “Mini Mapo” in Ibadan South West Local Government, which was initiated by the former governor of Oyo State, Chief Rashidi Ladoja.