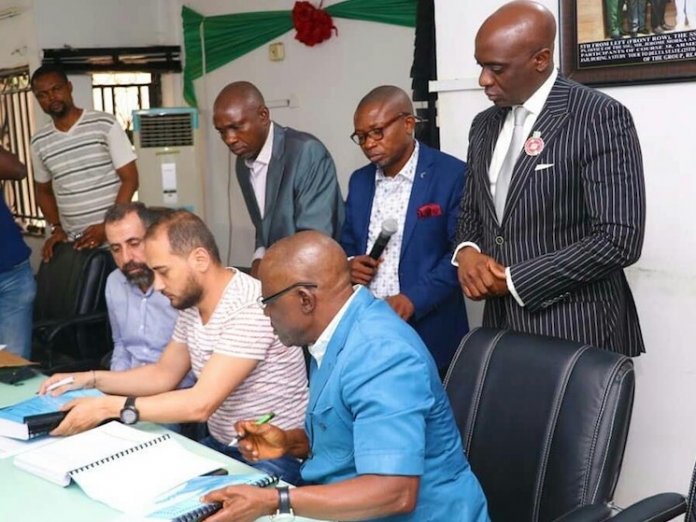 For the unwary, environmental challenges in Delta State revolve around oil spills, large expanse of wetlands that make project execution, especially roads, very expensive and air pollution from the many decades of flaring of associated gas that orchestrate acid rain.

But the ceremony of Wednesday, January 15, 2020, presided over by the Secretary to the Government of Delta State, Chiedu Ebie, unveiled an equally serious challenge the government has to contend with – the scourge of gully erosion and landslide.

The occasion was the signing of a N2.4 billion erosion contract for one of the five sites the World Bank has classified as posing clear and present danger to the affected communities. The erosion control contract was signed between the state’s Nigeria Erosion and Watershed Management Project (NEWMAP) and Levante Construction Limited for the Owanta Gully Erosion Project in Ika North-east Council.

The Midoma/Iwerebor erosion site in Owanta, Boji Boji, Owa is among the five selected and cleared erosion and flood cited for intervention by the World Bank in Delta State. The other sites are in Ubulu-Uku, Ukwu-Nzu, Jesse and Obomkpa.

For the Owanta site, the menace of devastating erosion has been affecting the area for over 20 years. This has created active gullies in different streets in the area and causing environmental degradation leading to destruction of infrastructure, loss of arable land, lives, properties and established means of income.

Ahead of the contract signing, Delta State NEWMAP had inaugurated a 12-member Resettlement Action Plan (RAP) Committee to commence the process of the resettlement of residents of the Owanta community away from the construction area. With resettlement almost completed, the contractor is expected to move to site immediately, according to the State Project Coordinator, Mr. Isaac Ufiofio.

The project involves construction covering over 2,800 metres of erosion sites in Owanta and is expected to be completed within 18 months. “The administration of Dr. Ifeanyi Okowa saw the need to partner the World Bank through the Delta State NEWMAP to tackle erosion challenges in the state. I therefore call on Levante Construction Company to ensure that the project is executed on time and to specifications”, Ebie said at the contract signing ceremony.

According to him, all five sites will ultimately be covered in a collaborative effort with the World Bank.

“The government is committed to addressing the erosion issue in the other four sites but due to financial limitations, we are taking it one project at a time. This is only the beginning. In fact, the process of combating the erosion challenge began only when Governor Ifeanyi Okowa came into office in 2015. In line with extant World Bank procedures, extensive studies were conducted, at least seven of them, at erosion sites before we got to the stage of beginning actual construction,” Ebie stated.

Due to the severity of the erosion, the State Project Management Unit (SPMU) had undertaken palliative work to desilt drains across four out of the five intervention erosion and flood communities in the state ahead of the commencement of the civil work. Ufiofio said the measures were to cushion the effect of flood and erosion hazards in the affected communities. Only Owanta community was not included in the palliative measures due to the severe nature of the gullies along its corridors, as straight civil work was the panacea.

The representative of the contracting firm, SPPIR, Mr. John Agusa, said the palliative work in Jesse was completed with opening of blocked culvert and construction of new ones, while the one at Ubulu-Uku is ongoing.

He listed the roads that received the palliative intervention in Jesse to include Efemini, Idjedaka, Uyo, Akpaka, Old Market road to Ethiope River and Oguedion road among others.

Explaining the collaboration with the World Bank, Ebie, a lawyer and one-time commissioner for Basic Education in the state, said it was an opportunity the state could not afford to miss. Noting that the state has already paid its N500 million counterpart funding, he said Okowa ensured that the state became part of the World Bank initiative as soon as he became governor.

“Actually, Delta State started keying into the World Bank initiative less than three months after Okowa was sworn in 2015. By May of the following year, the mandatory series of studies began and today we are here. Our state has diverse environmental challenges, including those associated with the fall out in the exploitation of oil and gas resources. There is also the difficult terrain, mainly in the coastal area. The wetlands and chain of rivers make project execution very expensive.

“Experts will tell you that it may require up to five times the cost of building a kilometre of road in dry parts of the country to build a similar road in the coastal area in Delta State. And even in the upland area, the spectre of gully erosion and landslides have brought another dimension to managing the environment. But they do not deter the governor. He has evolved a creative approach to addressing the challenge hence the partnership with the World Bank,” Ebie said.

To Christian Onogba, Commissioner for Environment, “The contract signing agreement was historical, as the menace of erosion in the area had displaced the residents from their farms and their homes destroyed. Now, very soon, all that will be a thing of the past.”