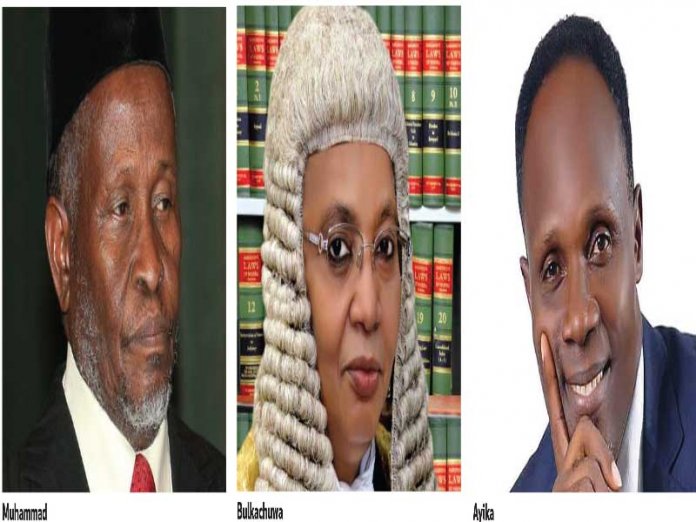 Davidson Iriekpen questions the basis on which the Court of Appeal upturned the judgment of the Supreme Court concerning the election of Valentine Ayika, a former member of the House of Representatives representing Njikoka/Dunukofia/Anaocha Federal Constituency of Anambra State

A former member of the House of Representatives representing Njikoka/Dunukofia/Anaocha Federal Constituency of Anambra State, Valentine Ayika, wants to know whether the Court of Appeal can upturn the decision of the Supreme Court? For this reason, he is currently at the Federal High Court in Abuja, to seek an enforcement of the judgment of the apex court in Appeal No: SC 1330/2018 wherein he was declared the candidate of the Peoples Democratic Party (PDP) in the February 23, 2019 general election.

He also wants the court to make a declaration that question of his candidacy of the PDP in the election for House of Representatives representing Njikoka/Dunukofia/Anaocha Federal Constituency of Anambra State has been settled by the Supreme Court in its judgment between the PDP vs Dr. Richard Egenti in Appeal No: SC 1330/2018 delivered on February 11, 2019.

Ayika further wants the court to among others, declare that having regards to Section 287(1) of the 1999 Constitution (as amended) which enjoins all persons, authorities, including courts, to obey and enforce the decisions of the Supreme Court that the first respondent (INEC) is bound to enforce the decision of the Supreme Court in Appeal No: SC 1330/2018 delivered on February 11, 2019.

The former lawmaker who was sacked from the House of Representatives in controversial circumstances, had contested the primary election for the House to represent Njikoka/Dunukofia/Anaocha Federal Constituency of Anambra State on October 3, 2019. The election was monitored by INEC monitored which issued a report.

Further to his victory, his name, together with other candidates for the federal legislature for the 2019 general election, were submitted to the commission on October 18, 2018.

The PDP then challenged the decision at the Court of Appeal in Abuja in Appeal No: CA/A/1041/2018. The appellate court upheld the judgment of the FCT High Court.

When the commission released the names of candidates for the elections on January 17, 2019, no name was published for Njikoka/Dunukofia/Anaocha federal constituency based on the pending suit. It rather remarked “court order party yet to submit name of candidate.”

The case finally went to the Supreme Court in Appeal No: SC 1330/2018. A few days to general election, precisely on February 11, 2019, the apex court gave its verdict wherein the suit at the trial court, Suit No: FCT/HC/CV/3065/18, was declared incompetent and a nullity for lack of jurisdiction on the part of the trial court. One of the grounds on which the apex court based its decision was that the suit was statue-barred. It also held that since the suit was not filed within the 14 days window required by law, it was incompetent.

The verdict of the apex court found further authority in the case of Abubakar V. Nasamu (2012) LPER, 7826, (12) where it defined “nullity in law” as follows: “A nullity in law is a void act, an act which has no legal consequence. A proceeding of which has been declared a nullity is void and without legal effect or consequence whatsoever. It does not confer any legal right whatsoever, or it does not impose any obligation or liability on any one.”

The effect of the judgment was that Ayika’s candidature, in law, was not challenged hence it subsisted from the day it was submitted to the INEC to the day the election was conducted. In order words, the apex court affirmed my candidature.

In obedience to the apex court’s judgment pursuant to Section 287(1) of the Constitution of the Federal Republic of Nigeria as amended which provides, “The decisions of the Supreme Court shall be enforced in any part of the federation by all authorities and persons, and by courts with subordinate jurisdiction to that of the Supreme Court,” INEC then removed the remark “court order party yet to submit name of candidate” and replaced it with his name.

On the list for issuance of certificate of returns, the commission, again, remarked beside his name, “Court Order,” indicating that his candidature was affirmed by the apex court’s judgment. The commission then proceeded to issuing him with Certificate of Return.

Ayika’s victory at the 2019 general election was challenged by the candidate of the All Progressives Grand Alliance (APGA), Ferdinard Dozie Nwankwo, who in the general election, was the first runner-up at the Anambra State Legislative Election Petitions Tribunal sitting in Awka in Petition No: EPT/AN/HR/07/2019 on the same grounds of his candidacy. The APGA candidate contended that he won the election because the PDP did not have a candidate in the election. He added that he won the lawful votes – the same subject matter that the Supreme Court determined before the election.

In its judgment, the tribunal ruled in his favour. It held that Ayika was validly nominated and sponsored by his party, the PDP, and that by the Supreme Court judgment in Suit No: SC 1330/2018, the issue of his candidature had been settled finally.

Nwankwo then appealed the verdict in Appeal No: CA/E/EAPP/19/2019. But to Ayika’s shock, and against the clear provision of Section 287(1) of the 1999 Constitution as amended, the Court of Appeal in Enugu, with Justice Monica Bongban-Mensem leading Justice Ignatius Igwe Agube and Justice Abubakar Sadiq Umar on November 1, 2019, sacked him from the House of Representatives. They held that the PDP candidate was not a candidate in the election.

The justices also referred him to the FCT High Court Suit No: FCT/HC/CV/3065/18, a suit that the Supreme Court had already declared as incompetent and a nullity, hence, had no legal effect whatsoever. They held that he was removed as a candidate by the judgment of the said suit.

The decision has therefore raised many eyebrows. Back on the fact in the Nigerian judicial system, the principle of stare decisis, which provides the necessary certainty in the administration of justice has long been established, observers are wondering if the Supreme Court having declared the suit at the trial court, Suit No: FCT/HC/CV/3065/18, incompetent and a nullity, if that did not automatically uphold Ayika’s candidacy.

They further wondered if the Court of Appeal can come under any guise to nullify his election on the same grounds the Supreme Court based its decision. They equally wondered where the appellate court derives the temerity to detract and deviate from the decision of the Supreme Court?

The framers of the Constitution, which is over and above all persons and authorities in Nigeria, conscious of the likelihood of conflicting decisions of our courts in the country, granted the power of finality of determination of disputes in the Supreme Court. Section 235 of the Constitution provides that “Without prejudice to the powers of the President or of the Governor of a state with respect to prerogative of mercy, no appeal shall lie to any other body or person from any determination of the Supreme Court.”

Observers believe that by the combined effect of the two sections of the Constitution cited above, the issue of Ayika’s candidature at the 2019 general election by the Supreme Court in Suit No: SC 1330/2018 is final. They contended to that effect, the issue cannot be litigated on again or appealed against to any other court in Nigeria. All that is expected of the parties, especially INEC and National Assembly is to enforce the said judgment.

This is why the former lawmaker has petitioned to the Speaker of the House of Representatives, Hon. Femi Gbajabiamila. He said it was pertinent to state that his Supreme Court-affirmed candidacy is the authority that his campaign at the general election was founded on. He added that it is also the foundation upon which his Certificate of Return and swearing in as a member of the National Assembly is resting on, stressing that it would amount to outright violation of the provisions of the Constitution, particularly, section 287(1) for anybody or authority to act in any way that is against the effect of the Supreme Court ruling. He further noted that the franchise exercised by the over 55,000 voters that voted for him at the polls should not be wasted.

Observers are wondering if the Supreme Court having declared the suit at the trial court, Suit No: FCT/HC/CV/3065/18, incompetent and a nullity, if that did not automatically uphold Ayika’s candidacy. They further wondered if the Court of Appeal can come under any guise to nullify his election on the same grounds the Supreme Court based its decision. They equally wondered where the appellate court derives the temerity to detract and deviate from the decision of the Supreme Court?