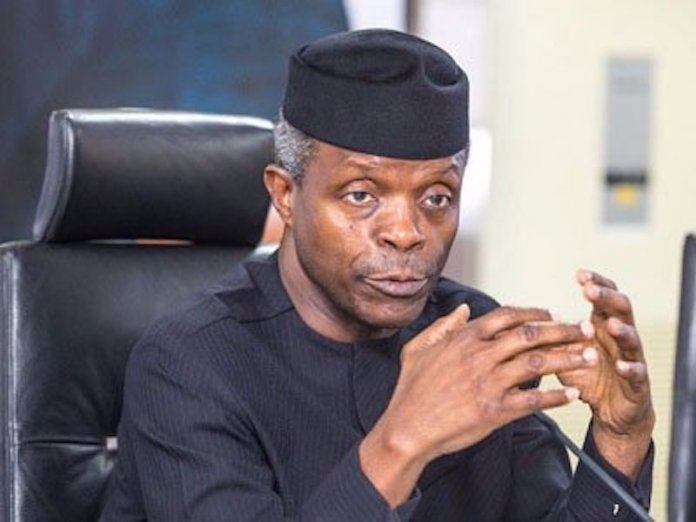 Vice-President Yemi Osinbajo Monday lamented the inability of Nigeria to leverage on the engineering and technological ingenuity that emanated from the defunct Republic of Biafra during the civil war.

He expressed the regret at a town hall meeting at the National Museum, Umuahia organised by the Ken Nnamani Centre for Leadership and Development to mark the 50th anniversary of the end of Nigeria civil war.

However, he said that the objective was not achieved but did not explain the reasons why PRODA was allowed to collapse.

Prof. Osinbajo, who was accompanied to the War Museum by the host governor, Dr Okezie Ikpeazu of Imo State, Senator Hope Uzodinma and Minister of State for Mines and Steel Development, Mr. Uche Ogah, harped on the need to forge national unity and cohesion.

He urged Nigerians “to discard the bitterness of the past and look forward to a united Nigeria”, adding that “no human relationship is perfect and that the ties that bind us has survived intense disagreements”.

In his address, Governor Ikpeazu reminded the federal authorities that many areas in the South-east zone were subjected to intense bombardments thereby wrecking the infrastructure and devastating the environment.

He called on the federal government to pay particular attention to the development of infrastructure in the South-east in the spirit of genuine reconciliation.

Ikpeazu regretted that 50 years after the end of the civil war, Nigeria was still struggling with reconciliation, reconstruction and attainment of nationhood, adding that Nigeria should emulate Rwanda, which emerged stronger after the sad experience of genocide.

The founder of the Ken Nnamani Centre for Leadership and Development, Senator Ken Nnamani, earlier in his welcome address, called on leaders to treat every part of Nigeria with fairness and not to sow seeds of discord.