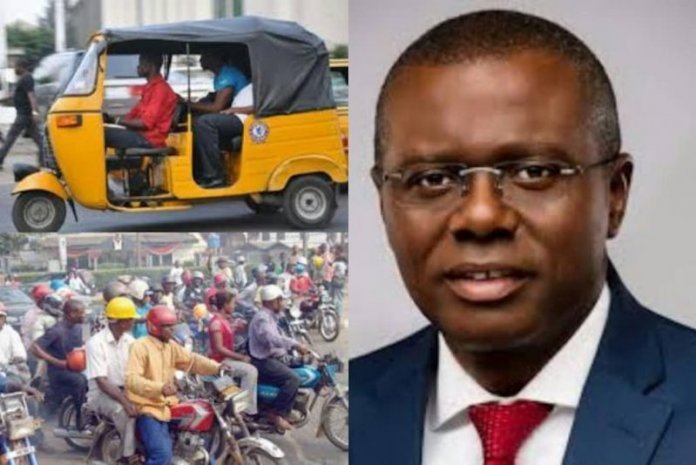 The Lagos State Government has announced the restriction and ban of commercial motorcycles (Okada) and tricycles (Keke) in six local government areas of the state with effect from February 1.

The Commissioner for Information and Strategy, Mr Gbenga Omotoso, made this known in Ikeja while addressing newsmen after the State Security Council meeting.

”The full enforcement begins on February 1, 2020,” the commissioner said.

According to him, the rate of crimes aided by motorcycles (okada) and tricycles (keke) keeps rising, as they are also used as getaway means by criminals.

“This is the first stage of the state government’s plan to sanitise our roads and protect Lagosians from the negative effects of these illegal modes of transportation.

“The law is very clear. Motorcycles (okada) and tricycles (keke) are banned on all highways, bridges and listed roads.

He said that law enforcement agents had been directed that with effect from February 1, 2020, there would be zero tolerance for motorcycles and tricycles in (on) the listed local governments, highways and bridges.

“Members of the public are hereby notified that all offenders and violators will be dealt with in accordance with the law,” Omotoso said.

He said that accident figures of Okada and Keke menace were scary.

Omotosho said there were over 10,000 accident victims recorded at the General Hospitals alone from 2016 to 2019.

He said this number excluded unreported cases and those recorded by other hospitals, adding that the total number of deaths from reported cases was over 600 to date.

The commissioner said that some buses had arrived in the port to be cleared and would be rolled out to ensure that residents were adequately served.

He said the key point was that there was need to make transportation safe in the state.

“Definitely, people are not going to suffer, the safety and security of life of Lagosians are paramount to the government,” Omotoso stated. (NAN)