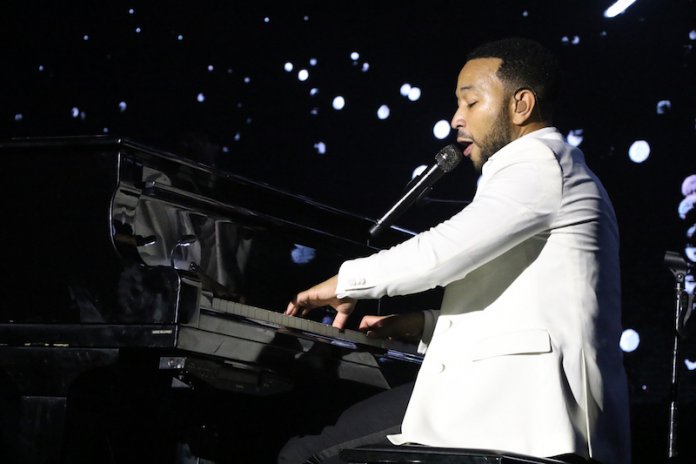 “I thank you all for being here and for joining us in reshaping the African stories,” Nduka Obaigbena, Chairman and Editor-in-Chief of the THISDAY Media Group, ARISE News Channel and Africa focused style and culture magazine ARISE Magazine, told the audience. “I thought in addition to the 1250 visionaries who co-founded THISDAY, I should recognise our friends in the house. May I introduce the man from Ikenne home of Chief Obafemi Awolowo, Chief Ayo Adebanjo, who at 92 is here with us.” This elicited uproarious side-talks from the audience.

Also in the audience was the elegant model and a lover of African brands, Naomi Campbell with a few members of the Nigerian political elite and ex-diplomats. Among the latter was the former Secretary-General of The Commonwealth, Chief Emeka Anyaoku. Of course, among the newspaper publishers were The Guardian’s Maiden Ibru and the oldest serving journalist in Nigeria and founder of Vanguard newspapers, Prince Sam Amuka-Pemu.

The THISDAY logo, carved in jaw-dropping shimmering backdrop at the Eko Convention Centre stage that Monday, January 20 evening, resonates with a tradition of glamorous music shows. For those who had been a part of this journey in its first 25 years, THISDAY has always been an unparalleled trendsetter with premium music shows that had paraded world-class artists such as Beyonce, Jay-Z, Busta Rhymes, Ciara and a host of others. Over 1000 visionaries who travelled down this spasmodic path to greatness with THISDAY were celebrated alongside distinguished Nigerians and institutions who were honoured at THISDAY Awards 2020.

The red carpet was in itself like a hall of fame with a roll call of staff, past and present, as the backdrop. Promised to be a night of amazing performances, the air was stiff with a tinge of suspense overlaid with an aura of sophistication. Meanwhile, some former staff in diaspora have been posting congratulatory messages on the various social media platforms while assigning current staff who were present at the venue to take pictures of their names as it appeared on the list. Interestingly, some have memorised their numbers on that list which has been fondly christened by staff at newsroom banter as “THISDAY Book of Life.”

Gracefully, Obaigbena sat on the stage after addressing the audience who came in through the tastefully decorated walk way lined with earthy flowers and moderately-dimmed lights.
Not that anyone had expected any lacklustre performance from that stage, where classic rock and roll songs as well as ballads from the 70s emitted to serenade the guests, many of whom had been charmed by the persuasive waiters. Cheese, broccoli, salmon and finger foods had sat well with some while others at the upper gallery relished a buffet of African cuisine.

Then came Asa, one of Nigeria’s biggest music exports to Europe, based in France. Clad in her white regal, silky drape atop her black top and jeggings, she sauntered in like the diva that she embodies. Asa’s ability to transport her audience through an orgasmic series of performances was heightened with the back up instrumentation for the rock-textured performance of “Preacher Man”. The spiritual essence of the song was transmogrified into an amorous sung-poetry with the suggestive lyrics in the hook, “Need You Now”. With her defining hit track, “Jailer”, she garnered sing-alongs from the audience, albeit largely distracted by the edibles. Her cosmopolitan band members dished out the reggae flavour for the song to contrast her near-melancholic delivery of a song with strong warning lines, “Fire on the Mountain”.

To the ohs and ahs of many, one of the comperes for the night, Charles Aniagolu of ARISE TV announced the presence of the Emmy, Grammy, Oscar, Tony (EGOT) as well as the Golden-Globe award-winning singer-songwriter, John Legend. Born John Roger Stephens, Legend has a legendary music and advocacy portfolio. For starters, Legend is the first black man to have won EGOT, that is all-four most prestigious awards in the television, music, film and theatre history in America. In 2019, he was named the People’s Sexiest Man Alive. Also, Legend is a world-renowned feminist and a fearless voice in the “Mute R Kelly” movement what with his solidarity with the survivors of the two decades of sexual abuse of minors alleged against the famed R&B singer-songwriter, Robert Kelly, otherwise known as R.Kelly. Legend is committed to the fight against HIV/ AIDS , global peace and social justice.

That night, Legend, though the ladies’ man thrilled the male fans too. A handful of his fans gathered at the foot of the stage with mobile phones and cameras as he belted out song of his greatest hits such as, “Tonight,” “Green Light,” his debut single, “Used to Love You” amongst other medley of hits. Donning a black-and-white tuxedo piece, everything seemed complete on the set and he brought glory to the THISDAY award night even with the absence of his collaborator on the SELMA movie soundtrack, Common.

As he dropped the microphone to sit behind the imposing piano, someone in the audience whispered repeatedly, “Ordinary People,” and Legend let his fingers run over the keyboard to produce a teasing chime for the anticipating fans. The opening notes for “Ordinary People” just puttered in, and the audience cheered knowing that he had heard from crowd.
Of course, the moment everyone was waiting for was his performance of the 2013 worldwide love anthem, “All of Me.” Legend struck a deal with the fans by inviting them to sing the song with him.

“You sound so beautiful,” Legend said to his varied-voiced fans who had become his newly formed choristers.
Meanwhile, as the news of his performance surfaced on the social media, fans’ reactions ranged from excitement to anger. The Lagos fans thought Legend should have publicised his arrival in Nigeria like American rappers, Cardi B and Future. But Legend only came for an exclusive party for THISDAY visionaries and awardees. Legend, while performing, promised to return to Nigeria as he basked in the heat of the warm reception. “I need a company right now,” he said through his slightly-laboured breathing, causing the wild girls to scream. A volumptous lady with a tight-fitting, deep plunge short dress climbed the stage and spun around with Legend, sharing the spotlight with the music virtuoso on the livestreamed event. The ‘wow’ moment came when Legend knelt before the young lady.

Legend wrapped up his performance with, “Green Light” which proved to be a proverbial parting song with the fast-paced hook, “I’m ready to go right now.” Definitely, he had to return in time for his pre-Grammy rehearsals and performance in the US. Legend’s seamless performance at THISDAY awards 2020 was a confetti of his cultured artistry, creative vocals, bewitching lyrics explored by an indefatigable show organiser.